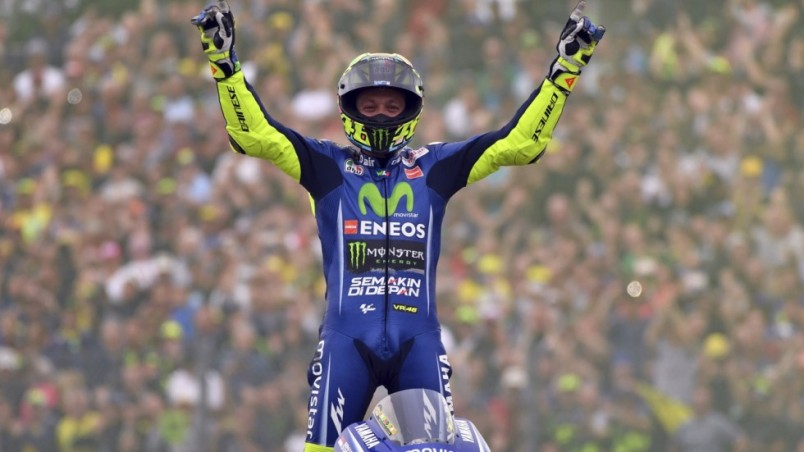 After 25 years, Valentino Rossi has decided to call it a day and hang up his leathers with 115 and nine World Championships to his name. In celebration of The Doctor’s incredible Grand Prix racing career, we’ve dug through the archives to bring you his 10 best ever races. You can relive them below.

After two fruitless and frustrating years with Ducati, Rossi returned to Yamaha in 2013, and immediately his fortunes began to change. The number 46 started fourth on the grid but managed to hunt down Honda duo Dani Pedrosa and Marc Marquez (Repsol Honda Team) to take the chequered flag first in Assen, and a first victory since Malaysia in 2010.

Valentino Rossi has won the Iveco TT Assen, picking up his 80th victory in the MotoGP™ premier class

25 years ago, the Czech GP set the scene for Rossi’s first-ever Grand Prix victory. Riding with Aprilia, the then 17-year-old showed those in attendance a glimpse of what was to come over the next 25 years.

Starting from P11 on the grid, the Doctor carved his way through the field before zeroing in on Championship leader Casey Stoner. The battle for victory raged as Rossi hounded the Australian until he finally made his move with three laps to go, taking the win and cutting the Championship gap to just 19 points.

Fiat Yamaha’s Valentino Rossi emerged on top after another great battle with World Championship rival Casey Stoner this afternoon in a superb MotoGP race at the A-Style TT Assen.

Those who braved the miserable conditions at the British GP 16 years ago were treated to a wet weather masterclass from Rossi. The Italian came out on top of an epic four-man battle for the lead, managing to keep his Yamaha upright as it twitched through the puddles formed on-track.

The number 46 turned on the style to come from deep on the grid to claim victory, as he made the eleventh corner of the Sachsenring his own. Nicky Hayden, Marco Melandri and Dani Pedrosa all succumbing to Rossi before he put on a defensive masterclass to seal the win.

Relive the premier class race at the 2006 betandwin.com Motorrad GP Deutschland at the Sachsenring

It didn’t take long for the then 250 cc reigning Champion to make his mark in the 500 cc category with Honda, finishing on the podium three times in the opening seven races, before he eventually stood on the top step at Donington Park in the ninth round of the Championship. Victory at the British GP helped launch his title attack, though he would ultimately end his rookie year second in the standings.

An eagerly anticipated event ended with Rossi breaking Honda’s 10 race winning streak at Welkom. The Italian started from pole as he became the first rider to win consecutive races with different manufacturers and the first to win the season opener four season’s running.

Relive the classic South Africa Grand Prix at the Phakisa Freeway Circuit in 2004.

After being hit with a 10 second penalty for passing under yellow flags, Rossi produced a frantic pace to escape the clutches of Loris Capirossi, who was smoking his rear tyre in an effort to catch the reigning Champion. In the end, it was to prove in vain as the Doctor had opened up a 15.2 second gap by the time he took the chequered flag in Phillip Island.

Catalunya 2009 was another chapter in a long line of absorbing World Championship bouts between Yamaha teammates Rossi and Jorge Lorenzo. With the relationship perhaps at its most acrimonious point, a wall separated them in their pit box, very little separated them in the title race and on-track. As the lights went out in Montmelo, wheel to wheel combat followed which culminated in a gripping last lap shootout, where the number 46 produced a move at the final corner that caught everyone by surprise, not least Lorenzo.

An absolute stunner at Laguna Seca saw the Italian engage in a ferocious battle with Ducati’s Casey Stoner, with the two going blow for blow as they exchanged the lead on numerous occasions. The Australian was reigning Champion at the time and had won the previous three races in the lead up to the United States GP, while Rossi was seeking a first ever win at the Corkscrew in order to take control of the Championship. A mistake from the Aussie saw him end up in the gravel with eight laps to go, handing the Doctor a 25 point Championship advantage to go with victory.

Relive all of the action from the 2008 United States Grand Prix at Laguna Seca.