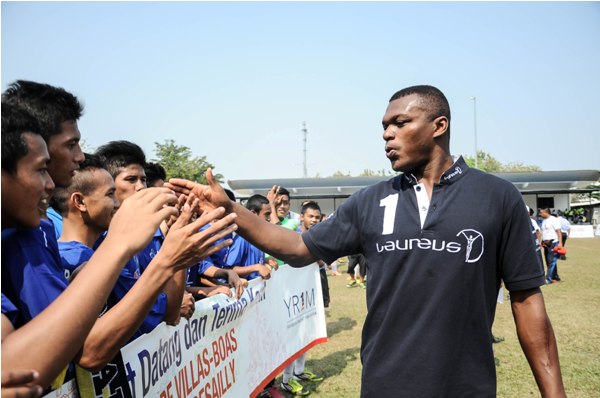 FRENCH World Cup winner Marcel Desailly threw the gauntlet to the Football Association of Malaysia (FAM) by declaring he is ready to be Harimau Malaya’s new head coach.

“I have completed and earned my coaching badges with FIFA and I am ready to coach the Malaysian national football team,” exclaimed the Ghanaian-born to reporters at the 2014 Laureus Sports Awards nominations in Kuala Lumpur today.

“I have positioned myself for the job and am happy to be involved in Malaysian football and its structure from the grassroots to the senior level. If I come, I won’t be coming for just a job. I will be bringing my knowledge, my fame and my experience to the table.

Desailly did not hold back when asked if he was interested in the national team position.

“I have made my intentions very clear a few months ago, and now it is up to the relevant parties to decide if they want me. If they don’t, then its fine and everybody’s happy, but if I’m the man of the situation then I’ll be pleased to be involved”.

The 46-year-old was also eloquent in his response when quizzed about his playing stints with Arabian club Al-Gharafa and Qatar SC towards the tail-end of his colourful career.

“Well, football is a universal. You just have to be adept both technically and tactically. The Chinese are disciplined when you give them an order. They are tactically not the best, so you need to give them time to improve.

“Africans, you need to be very strict with them. If not they will go crazy and not respect you. So it is important for a coach to instill his attitude according to the respective continent”.

The former Champions League and European Cup winner also underlined the importance of journalists in propelling athletes to the next level in their respective sport.

“It starts from you guys (the journalists). You have to build them to support the grassroots programme to allow the kids to have access to sports. From there you can work your way through and hopefully produce an Asian champion at the highest level”.

The French connection is certainly being felt in our country, especially after the imminent appointment of Philippe Troussier fell through at the last minute.

In Marcel Desailly lies a dynamic proven winner at the highest level, and someone who is articulate enough to get his ideas across without beating around the bush.

He’s frank, he’s fresh and it looks like the local media has already taken a liking to him.

The clincher is, he seems genuinely interested in the job and FAM may not have to break the bank to secure his services.

So, is Marcel Desailly the man to steer the national football team in the right direction?

The signs are all there, but we’ll just have to wait and see!