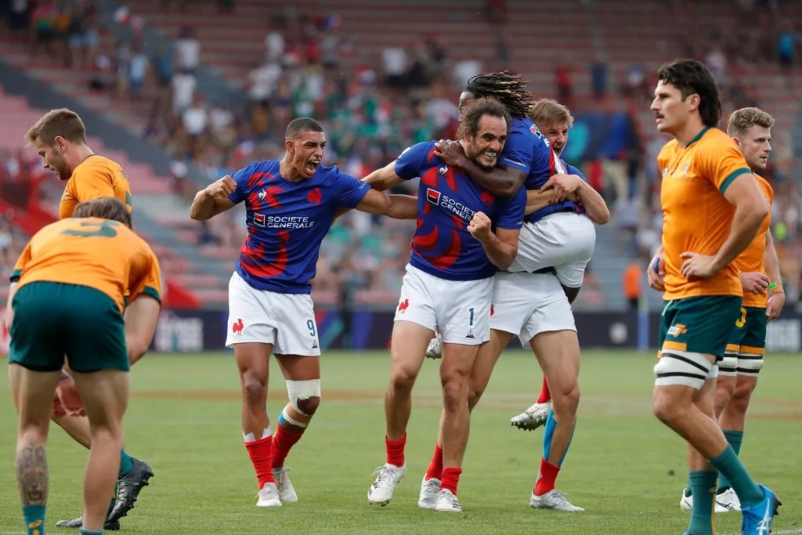 Hosts France progress to men’s semi-finals along with Samoa, Ireland and Fiji

Australia and New Zealand women storm into semi-finals in style, joined by Fiji and Ireland

Day two at the HSBC France Sevens in Toulouse delivered huge upsets as the top three sides in the men’s HSBC World Rugby Sevens Series standings were knocked out and New Zealand failed to reach the quarter-finals for the first time ever.

In the women’s competition Series champions Australia and Olympic gold medallists New Zealand impressively progressed to the final four where they will face Ireland and Fiji respectively.

Searing heat provided challenging conditions for the players on an action-packed day that saw Ireland, Samoa, France and Fiji progress to the final four in the men’s event.

But some of the biggest stories of the day were written in the morning session, with a dramatic conclusion to the Pool stage in the men’s event.

The shocks didn’t stop there, as New Zealand’s 29-14 defeat to Australia made some unwanted All Blacks Sevens history as they failed to progress to the quarters for the first time ever.

South Africa’s failure to make it to the knockout stages opened the door to the other title contenders, Argentina and Australia, but they suffered quarter-final defeats against Ireland and France respectively.

New Zealand’s women fared much better, reaching the semi-finals without conceding a single point, while champions Australia joined them there with a fourth consecutive victory.

Ireland and Fiji also progressed to the final four after hard-fought quarter-finals over Canada and France respectively.

The conclusion of the women’s Pool stage also threw up an upset, as relegation-battling Brazil earned a resounding 31-7 win over England to reach their first quarter-final since 2016.

The third and final day of action in Toulouse will see the women’s and men’s placement matches take place from 09:30-12:56 local time (GMT+2), leading up to the main event when New Zealand take on Fiji in the first women’s Cup semi-final at 13:30.

Ireland vs Australia follows at 13:52 to decide the second finalist, before the men’s Cup semi-finals take place. Ireland face France at 14:14, and Fiji take on Samoa at 14:36.

The placement play-offs will then be decided in both competitions, before the two bronze finals kick off; the women’s is at 17:07 and the men’s at 17:29.

The HSBC France Sevens women’s champions will be crowned in the Cup final at 17:56, before the men’s final concludes the weekend’s action at 18:26.

A bumper crowd is expected and the remaining tickets are available at https://billetterie.ffr.fr/

Toulouse is the sixth and final round of the women’s Series. While Australia were already crowned champions earlier this month following their fourth victory in five rounds, the race for the silver and bronze medals is on as well as the battle to avoid relegation. The unique rankings points system for the 2022 Series sees only the four best results from each team count towards the final standings.

The men’s Series will continue on to London next week before the finale in Los Angeles in August and all is still to play for at both the top and the bottom of the Series standings, which will include only the best seven results for each team from the nine-rounds of the 2022 Series.