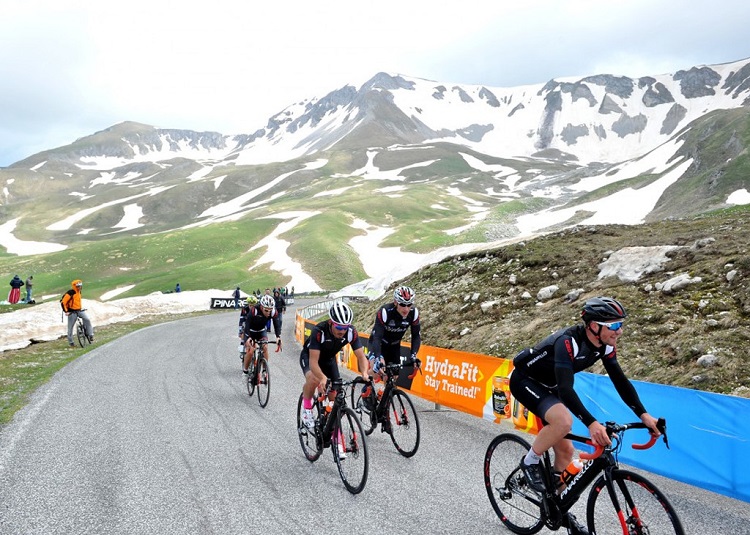 The Giro-E 2021, the only stage event in the world reserved exclusively for electrically-assisted bikes, will start in Turin on 8 May and arrive in Milan on 30 May.

The event takes place on the roads of the Giro d’Italia, running in parallel with the iconic Grand Tour and offers participants the Corsa Rosa experience: the sign-on at the start, the possibility to conquer of one of the six jerseys, the awards ceremony on the podium, hospitality at the end of each stage, and the extraordinary opportunity to ride alongside cycling legends, champions of other sports and leading figures of the cycling industry.

The format, created by RCS Sport, organizer of the Giro d’Italia, reaches its third edition this year.

The 2021 edition doubles up on its title sponsors with the entry of ENIT-Agenzia Nazionale Turismo alongside Enel X. The Giro-E will have the same number of stages as the Giro d’Italia: 21, the last of which is a final ITT.

A total of 1,540 kilometers will be covered, with an average of 73.3 kilometers per stage. The vertical elevation will be 25,500 meters (around half of that achieved by the professionals, who will reach 47,000 meters).

The Maglia Rosa this year celebrates 90 years while the race will also pass through Cortina d’Ampezzo, home of the 2026 Winter Olympics. In 1861, the year in which the Italian nation was founded, the 19-year-old French blacksmith Ernest Michaux mounted on a draisine two pedals to operate the front wheel: the bicycle was born. This beautiful combination, between the bike and the Belpaese, is celebrated every year by the Giro d’Italia and the Giro-E.

The Giro-E aims to promote the use of electrically-assisted bikes in everyday life for more sustainable mobility and to consequently reduce the consumption of fossil fuels and polluting emissions. It’s an aim that unites the Giro-E with another important project of the Corsa Rosa: Ride Green.

Now in its sixth edition, this initiative was created to reduce the environmental impact of the Giro and of the Giro-E: every year it carries out separated waste collection through a traceability and monitoring system, to safeguard the areas crossed by the Giro.

Technology, ecology, sustainable mobility: the Giro-E 2021 will bring these important messages on a journey from the first capital of Italy and its economic capital, passing through the great mountains, the hills where the best wines in the world are made and the masterpiece of the Belpaese which is its province.

73.3 km – the average distance of each stage

25,500 meters – the overall vertical elevation of the race

2,700 meters – the stage with the max vertical elevation