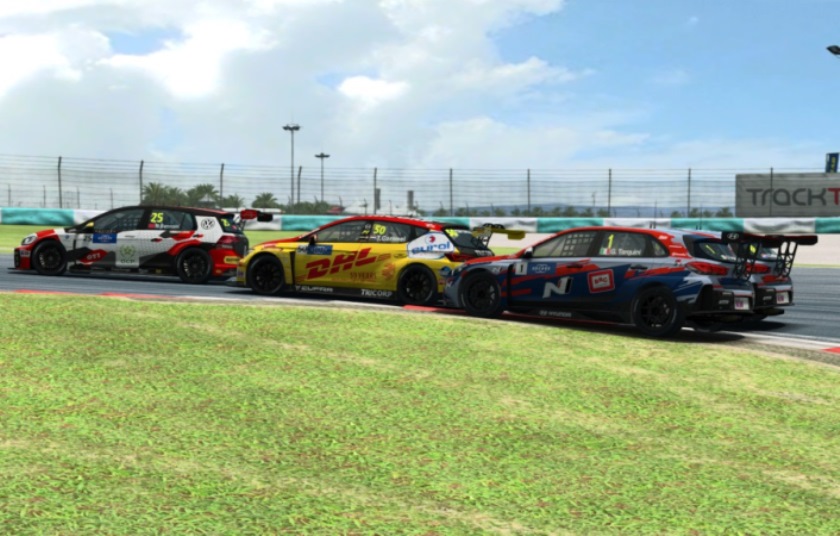 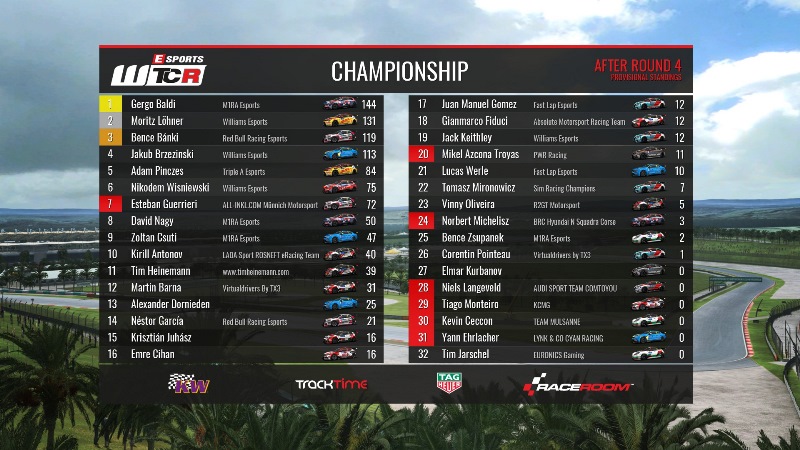 Esteban Guerrieri left it to the last race of the Esports WTCR Beat the Drivers series to score the first win on RaceRoom by a real-life WTCR − FIA World Touring Car Cup driver.

But as the Honda-powered Argentine celebrated his latest career achievement − at the virtual equivalent of the track where his WTCR title dreams ended last December − Gergo Baldi beat Moritz Löhner to the pre-season crown following two entertaining counters streamed live on Facebook, YouTube and Motorsport.tv.

Baldi was then able to keep largely out of trouble to finish eighth in Race 2 and claim the title by 13 points ahead of Löhner (Williams Esports), the German forced to settle for sixth behind a determined Slovakia-based Krisztián Juhász.

Guerrieri’s Race 2 victory ahead of Poland’s 2019 Esports WTCR live champion Kuba Brzezinski (Williams Esports) and Adam Pinczes(Triple A Esports) meant he completed the four-event series in seventh position in the final standings. Bánki, who was racing as Guerrieri in a Honda Civic Type R TCR, took third in the title chase after finishing P11 in Race 2.

As well as entertaining fans staying safe at home during the coronavirus pandemic, all Esports WTCR Beat the Drivers participants were promoting the FIA’s #RaceAtHome campaign.

A prelude to the full Esports WTCR online championship due to begin later this year, the pre-season series included online events at Hungaroring, Slovakia Ring, Ningbo International Speedpark and Sepang. It lists TrackTime, TAG Heuer and KW Suspensions as partners with a TAG Heuer watch going to champion driver Baldi.

Baldi pays tribute to M1RA Esports following title triumph
Gergo Baldi has credited M1RA Esports and his team-mates and fellow Hungarians Zoltán Csuti and Dávid Nagy for helping him to the Esports WTCR Beat the Drivers crown and a TAG Heuer watch.

Baldi took three wins during the series and wrapped up the title with two strong performances at a virtual Sepang International Circuit. Afterwards, last season’s Esports WTCR online champion, said: “I won at the end but it was really a team effort. We worked well together so it was not just my win, it was for the team. I didn’t think about the championship, that’s why I tried to overtake Bence [Bánki] at the end [of Race 1]. I was just focusing on the race and it paid off in the end.”

Of his prize, Baldi added: “I didn’t have a watch so I’m happy with that.”

Guerrieri happy after beating “amazing” professional simracers − and for semi-Sepang revenge
While Esteban Guerrieri’s last appearance at the 5.542-kilometre Sepang International Circuit ended in disappointment when Norbert Michelisz beat him to the 2019 WTCR − FIA World Touring Car Cup, he had reason to celebrate after taking the chequered flag first in Race 2.

“It was so close in the previous event, and, on top of that, that it happened at Sepang, where we had this bittersweet feeling last year. This is a little bit of a gift to the ALL-INKL team and to Honda for what we missed last year. It’s different, and it’s not the real thing, but what I put in, the effort and dedication, and the spirit of the battle, this is real. So, even though my mechanics or Honda aren’t here with me, I wanted to share this with them. It was good fun and a good show, so I’m thankful to WTCR for putting this together.”

Having started from the reverse-grid pole after finishing P10 in Race 1, Guerrieri led throughout and relished the occasion. “There was actually a lot of pressure from Brzezinski. I didn’t want him to get into my slipstream so I had to push in every lap and make no mistakes.

“I am quite happy [that] I could find a good pace and drive against these amazing drivers who have many hours and days in the simulator like I do in real life. I went for it and it paid off in the final race. Challenges are what makes it good, makes it exciting and we are here with a nice win.”

Bánki resists early pressure to win Race 1 from pole
Bence Bánki resisted intense early pressure − and held on during some thrilling side-by-side moments with Gergo Baldi − to convert his pole position into victory in Race 1. With Baldi strengthening his title bid in second place, Kirill Antonov grabbed third in a dramatic four-car final-corner tussle, having entered the turn in sixth position.

With Zoltán Csuti running wide under braking for the left-hander, Moritz Löhner seized his opportunity to snatch third. But Antonov carried more speed out of corner and got ahead in the drag race to the line to complete an impressive charge from P10 on the grid. Löhner took fourth from ninth ahead of Baldi’s fellow M1RA Esports drivers Dávid Nagy (fifth) and Csuti (sixth).

Having been demoted to third by Kirill Antonov, Wisniewski fought back at the first corner on lap two. Antonov attempted to defend the position, there was contact and both ran wide, which allowed Kuba Brzezinski to sneak through into second followed by Pinczes, the Hungarian having been bumped down the order during a frantic opening lap.

Although Brzezinski remained a constant threat, Guerrieri didn’t falter to win ahead of the Williams Esports’ driver. Pinczes took the final podium spot in third ahead of Antonov and Krisztián Juhász, who kept Moritz Löhner at bay in fifth. But with rival Gergo Baldi fighting through to claim eighth place, Löhner would have gained little in his title quest had he been able to pass Juhász. Néstor Girolami and Zoltán Csuti round out the top 10 positions.