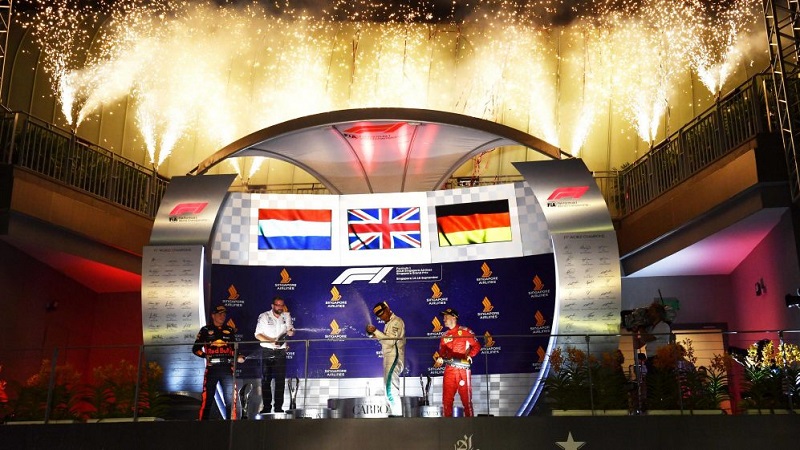 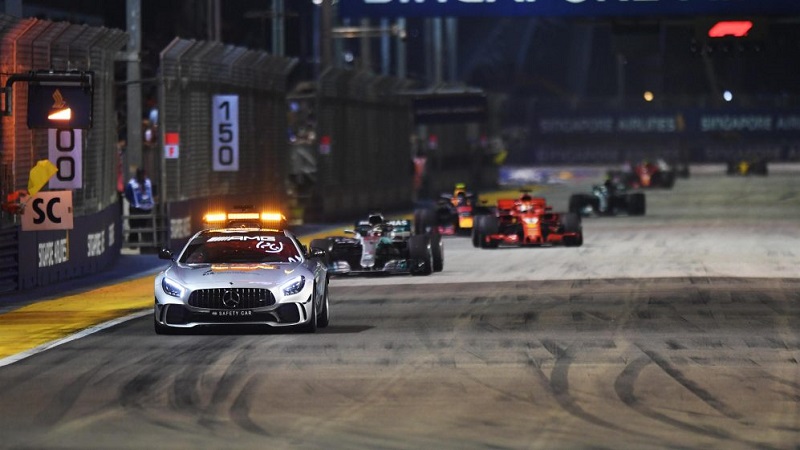 For two races in a row now, Lewis Hamilton has won Grands Prix that he arguably shouldn’t have. After stealing the Italian Grand Prix from under Ferrari’s noses, Hamilton produced another dominant display in Singapore, seeing off the challenge of Red Bull’s Max Verstappen to increase his lead in the title race over arch rival Sebastian Vettel, who could only finish third.

Beneath the track’s 1,771 lights, Hamilton used his “magic” pole position from Saturday to great effect, leading off the line as behind him, the Force Indias came together, with Esteban Ocon finding himself out after just three corners.

After Singapore maintained its 100% Safety Car record, Hamilton nailed the restart as Vettel settled into P2, having smartly managed to nip past Max Verstappen just before the Safety Car was deployed.

That was about as good as Vettel’s afternoon got though. With Ferrari calling him in for fresh rubber on lap 14, he was unable to make the undercut on Hamilton work, ending up behind Verstappen after the first round of pit stops. That definitely hadn’t been part of the script heading into the weekend…

From then on, Vettel was in damage limitation mode, as he was forced to watch on as his 2018 championship hopes took a further hit. As the chequered flag fell on Hamilton’s 69th career win, the British driver earned himself 25 points to Vettel’s 15, the gap between them in the drivers’ standings now up to a full 40 points.

Having suffered with a misfiring engine throughout the weekend, however, and after complaining of false neutrals in his gearbox at the start of the race, Verstappen was delighted to convert his second place in qualifying into the same position in the race – even if Red Bull had viewed Singapore as their last big chance of securing a win in 2018.

Behind the podium finishers, Mercedes’ Valtteri Bottas just managed to hold off his fellow Finn Kimi Raikkonen for fourth place as Daniel Ricciardo, who’d come away from qualifying puzzled at his lack of pace, could only manage sixth.

Further down the order, it was a great day for McLaren, as Fernando Alonso used his free choice of tyres resulting from qualifying 11th to end up seventh and ‘best of the rest’ in the race, ahead of the Renault of Carlos Sainz, while Charles Leclerc put in yet another impressive 2018 race performance, the newly-minted Ferrari driver ending up P9.

The second Renault of Nico Hulkenberg rounded out the top ten, but ultimately, once again they day belonged to Mercedes and Hamilton who once again triumphed on a track that was not expected to suit the W09.

How the race unfolded…
A Safety Car has been called out at each of the 10 previous Singapore Grands Prix – and it took just three corners for Bernd Maylander to get the nod this year. In contrast to 2017, the field filed fairly politely through Turn 1, Hamilton leading Verstappen and Vettel, the German having half tried a move around the outside of the Red Bull.

But as the Force Indias navigated Turn 3, Esteban Ocon tried to go around the outside of Sergio Perez. The gap closed and Ocon found himself spat into the wall, the Frenchman hinting afterwards that he felt his team mate had been at fault, even if the stewards cleared the Mexican. Either way, the Safety Car hit the track as Ocon’s VJM13 was recovered, but not before Sebastian Vettel had made it past Max Verstappen’s Red Bull heading down Raffles Boulevard.

Hamilton managed the restart well at the end of lap four, gapping Vettel by 0.8s by the time he reached the start-finish line.

But with all of the front-runners running on the hypersofts and desperate to keep the life in them, the first dozen laps were reeled off in what could best be described as a stately manner.

On lap 11, Hamilton radioed to his pits. “There’s a lot left in the tyres,” he reported. Over on the Ferrari pit wall, they misheard the comment, reporting to Vettel that Hamilton had said he had no life in his tyres. “I don’t believe him,” was Vettel’s cool response.

But were Ferrari rattled nonetheless? Vettel was brought in just two laps later, and put onto ultrasofts.

Hamilton came in a lap after and bolted on softs, querying his team for bringing him in so early. “We’re looking good,” he was told by engineer Pete Bonnington. “We’re just covering the cars around us.” Hamilton emerged back into the net race lead, while Vettel was brought out into the path of Perez’s Force India.

As if that wasn’t bad enough, Vettel then suffered a further blow when Max Verstappen pitted for softs on lap 16, with the Dutchman coming out wheel-to-wheel with the Ferrari before moving ahead and sealing Vettel’s fate for the evening in the process, his victory chances in tatters with less than third of the race run. Were Ferrari paying dearly for a simple case of incommunicado?

Put it down he did, and as the order remained largely static in the race’s final act, Hamilton swept across the line nearly nine seconds to the good over Verstappen to record win number 69 of his career. As the German grimly sipped from his magnum of champagne on the podium, it appeared as though, once again, questionable Ferrari strategy had left him unable to take the fight to Hamilton. The gulf between the two drivers, as they both seek to become five-time world champions, is starting to look dangerously close to being unbreachable.

Hamilton, meanwhile, offered a weary smile as he eventually clambered out of his car after an hour and 44 minutes racing in Singapore’s humid heat, with the Briton knowing that he’d just taken another chunk out of Ferrari on a weekend where Mercedes had looked set to have the third quickest car of the field.

“I’m spent,” said Hamilton. “That felt like the longest race of my life. I‘m glad it’s over.”