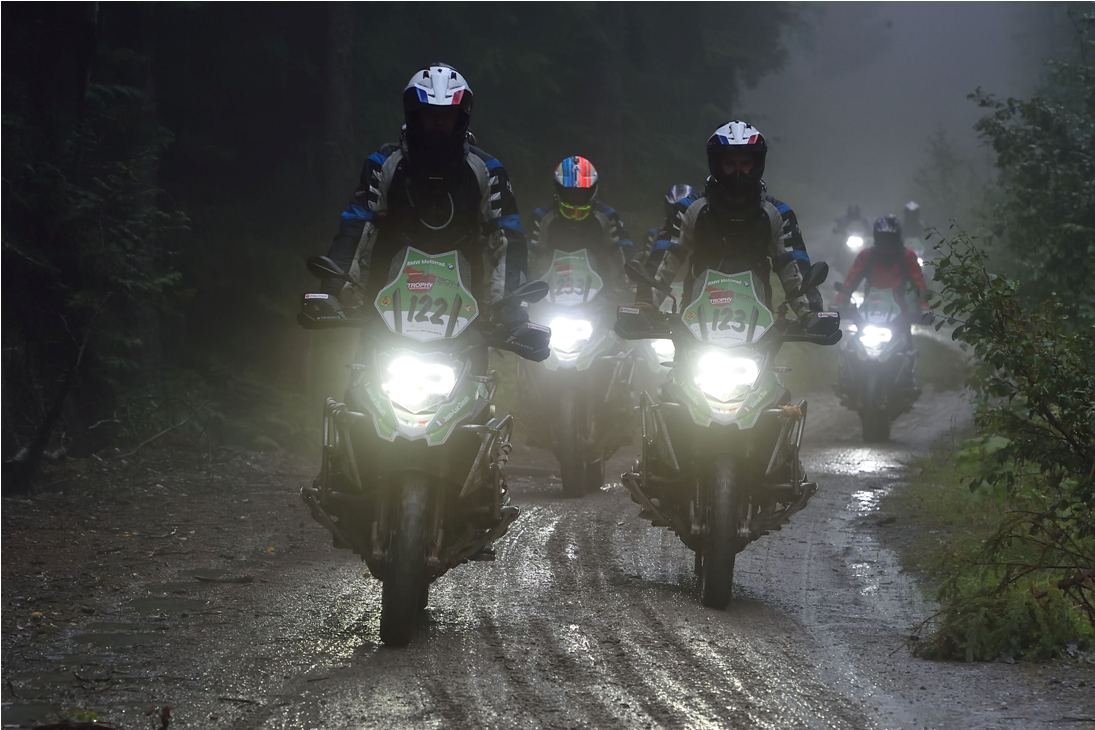 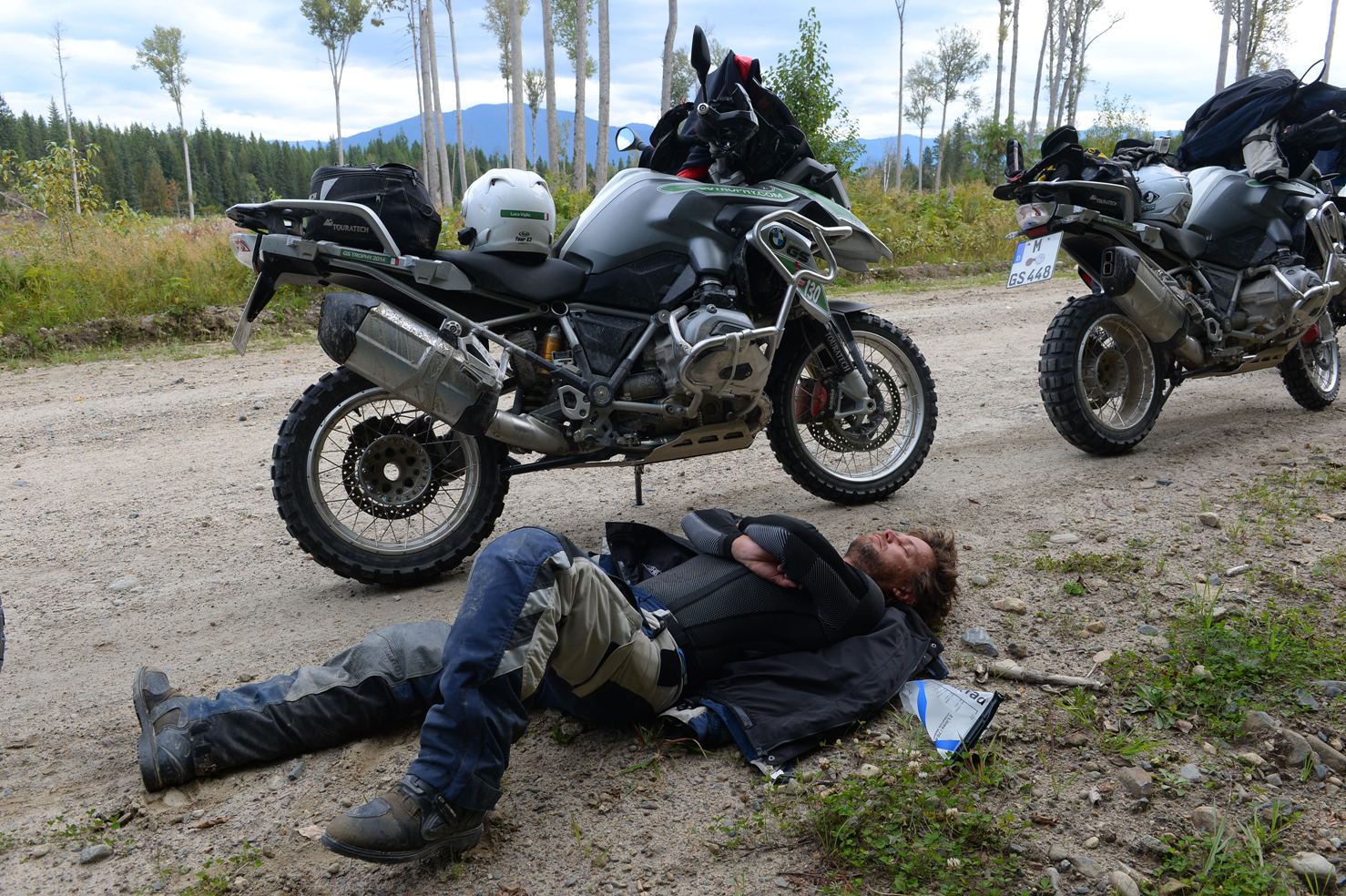 If this year’s GS Trophy participants came to Canada in search of adventure, then this was exactly what they got on day two of the competition, which started well before sunrise. Overnight storms, a 5.30am wake-up call and the promise of a muddy 50km off-road ‘warm-up’ was more than enough to see wet tents packed and stowed away early, leaving plenty of time for a hot breakfast before leaving the Golden Eco Adventure Ranch.

After an hour of slipping and sliding their way up and down the Donald logging road, the riders could relax and dry out as the clouds parted and the emerging sun warmed up a 120-kilometre paved section that took them past forests of ancient hemlock and giant cedars, over high mountain passes and alongside ski resorts waiting for their first snows.

A scenic 60-kilometre gravel section offering magnificent views of Arrow Lake and its surrounding peaks followed, and put many smiles on the faces of the riders as they made their way towards the first special stage of the day – a navigation test in a forest clearing which looked fairly straightforward, but proved to be anything but.

Teams were given GPS coordinates for a hidden red plaque and then had just 30 minutes to locate a further five of them, which could only be found in sequence by accurately reading and tracking them via their BMW Navigator V GPS systems. Sounds easy, but with fallen trees, overgrown bushes and the kind of undergrowth that trips you up at every opportunity, it was as much a test of each participant’s fitness as their orienteering skills. Team CEEU had set a time that looked unbeatable, but Korea – last into the test – tore almost two-seconds off that time. 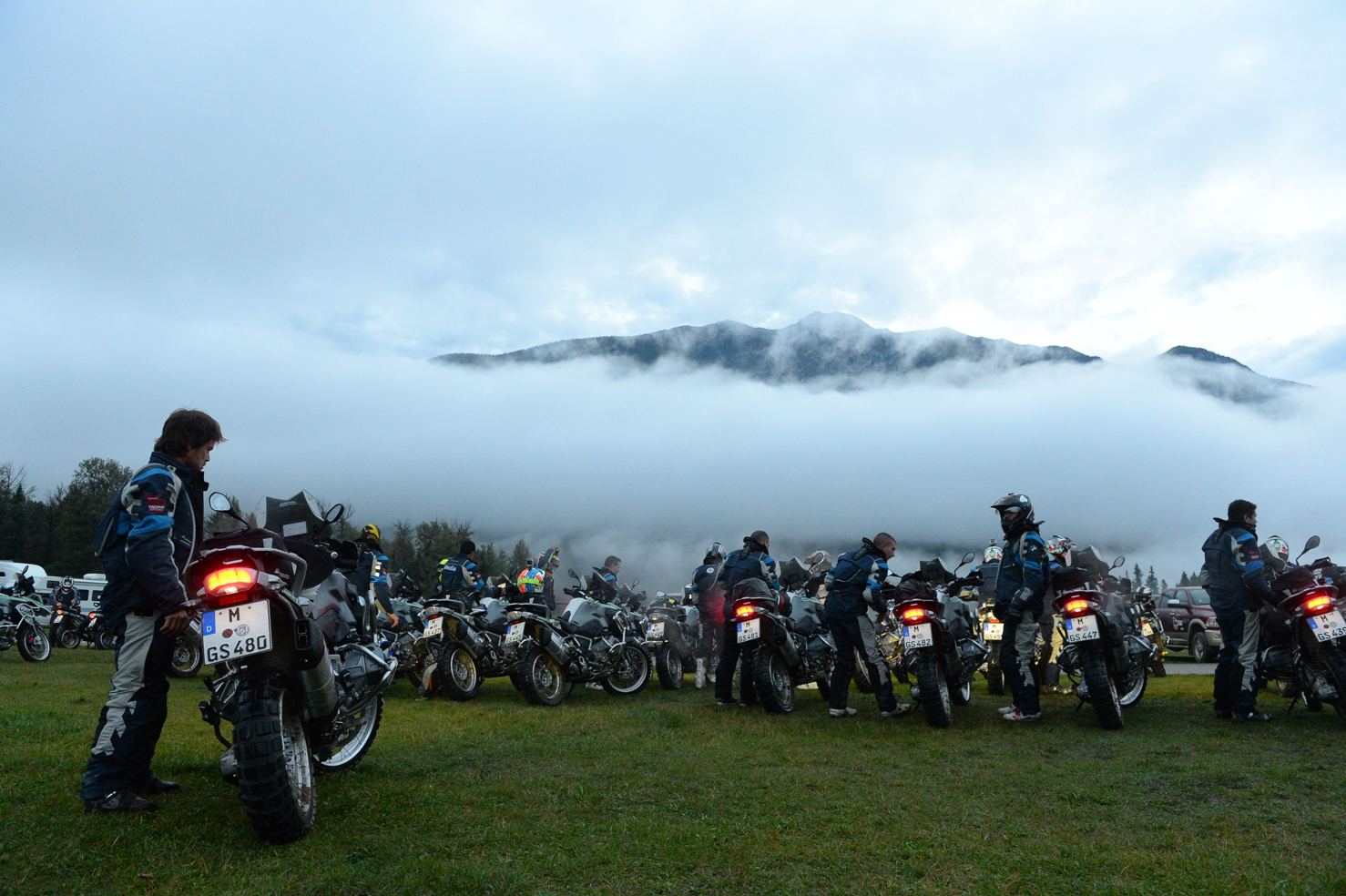 Then it was back on the gravel for a 40-kilometre dash to a ‘hop-on, hop-off’ ferry across Arrow Lake before an energetic-25 kilometre sprint along a testing single-track section brought them to the Nakusp ice hockey arena. Here, an entertaining and hard-fought knockout ‘Broomball’ competition saw Germany emerge as the victors.

Jae Sun Lee spoke of Team Korea’s delight in claiming the joint day win: “To win in the navigation test it was a matter of running, once we had gathered the coordinates we simply ran to the next, never walked – the opposite to our strategy in Broken Bridge yesterday when we knew a steady approach was the ideal. We are so happy, for us it has been a pleasure just to attend the GS Trophy, now to have won a test and to be placed seventh in the competition – it’s unbelievable.”

Meanwhile gstrophy.com’s video co-presenter Kurt Yaeger counted himself lucky to escape uninjured after a minor collision with a logging truck saw Yaeger and his BMW R 1200 GS tipped three metres down a bank. Both rider and bike were hauled back up to the road (by Team Alps and Team South Africa) and, given no significant damage, continued to enjoy the course.

With three special stages and 340 kilometres of riding ahead of them tomorrow, expect the competition – and the temperatures – to hot up, as the GS Trophy heads south towards Christina Lake…