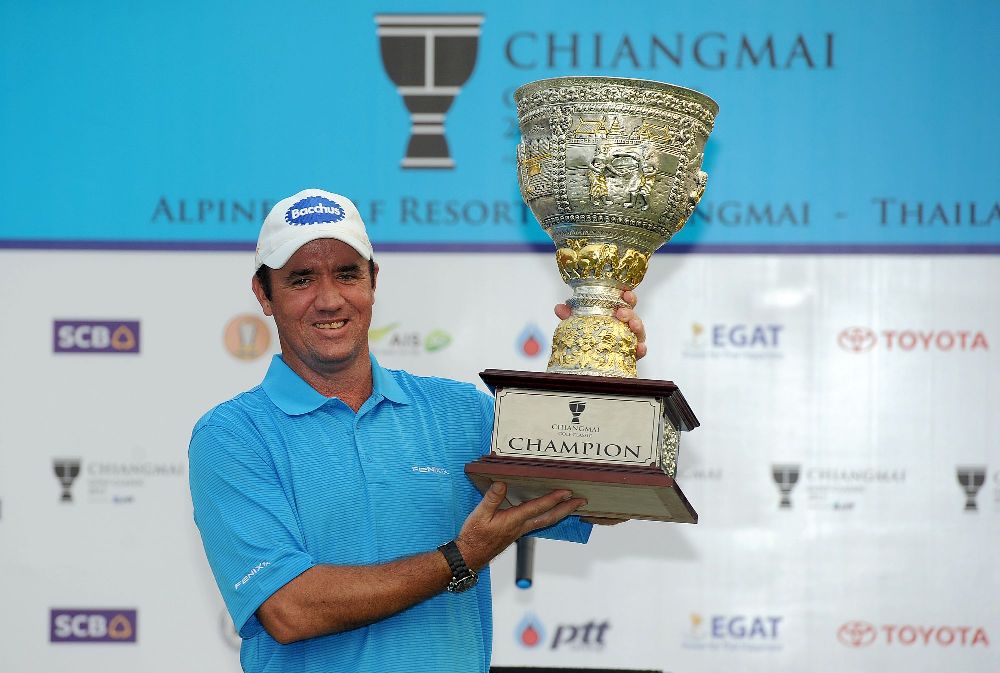 Long-hitting Scott Hend will be in fantastic form when he defends his title at the US$750,000 Chiangmai Golf Classic presented by PTT from November 13 to 16.

The powerful Australian capped a superb two-week swing when he won the Hong Kong Open a fortnight ago and contended for the Venetian Macau Open title before settling for second place last weekend.

His recent run of form mirrored his hard fought victory in Chiangmai last year where he had to overcome a six-shot deficit on the last day to win the inaugural event by three shots, thanks to a closing eight-under-par 64.

The win sparked a glorious run for Hend who went on to secure two more Asian Tour titles before finishing second on the 2013 Order of Merit.

“To hang in there for the first three days at the Chiangmai Golf Classic and then light it up on the final round to win was an awesome feeling,” said Hend, who is a six-time Asian Tour winner.

“Any win gives you confidence, but to chase people down on the leaderboard to lead and win a tournament is a confidence builder which helped me for the remainder of the 2013 season,” he recalled.

Hend will feature in Thailand with Major champions Jason Dufner of the United States and Charl Schwartzel of South Africa at the majestic Alpine Golf Resort Chiangmai, which won the Best Golf Resort Award at the 2013 Asian Tour Awards Gala.

Former Asian Tour number ones Kiradech Aphibarnrat of Thailand and Korea’s Noh Seung-yul will also be amongst the stars in Chiangmai next month.

After an amazing 2013 season, Hend is determined to take another shot at glory especially when he is enjoying a rich vein of form.

“To win three times on any tour in a season is a huge task which not many have and not many will do in Asia. I would like to think I could do it again, but it doesn’t happen that often these days. All I can say is I will be giving it a go,” said the 41-year-old Hend.

After a hand injury cut short his career on the PGA Tour, Hend earned his Asian Tour card in 2007 through Qualifying School and has since emerged as one of most successful international players in the region.

Apart from his multiple victories, he has finished twice inside the top-five of the Order of Merit and has not finished outside the top-30 in the rankings.

“It has been nice to keep sharp and I enjoy playing on the Asian Tour. It has provided a place for me to play when I had nothing and it has exposed me to the world and other golfers which have increased my skills both in golf and life. It is great to see the tour and its players growing stronger and more diverse every year,” he said.

The Chiangmai Golf Classic will promote Chiangmai as a leading golfing and tourist destination through the four days of live broadcasts on the Asian Tour’s global television platform, which reaches over 180 countries and 625 million homes.

The Alpine Golf Resort Chiangmai, designed by Ron M. Garl, is located in a valley between mountain ranges in the heart of the San Kampaeng natural forests and boasts of natural beauty.

Tickets can now be purchased at Thaiticketmajor at the following price: