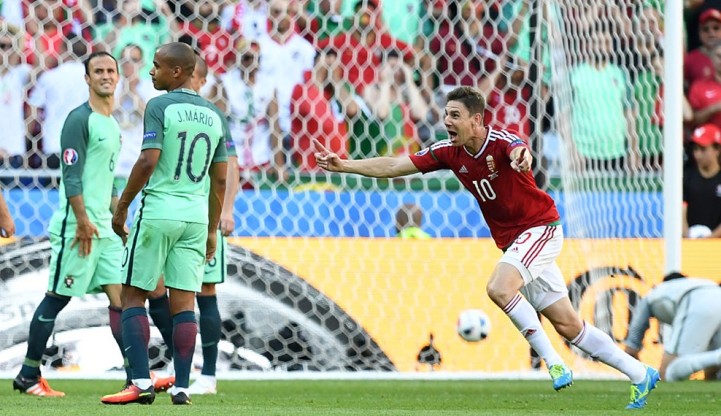 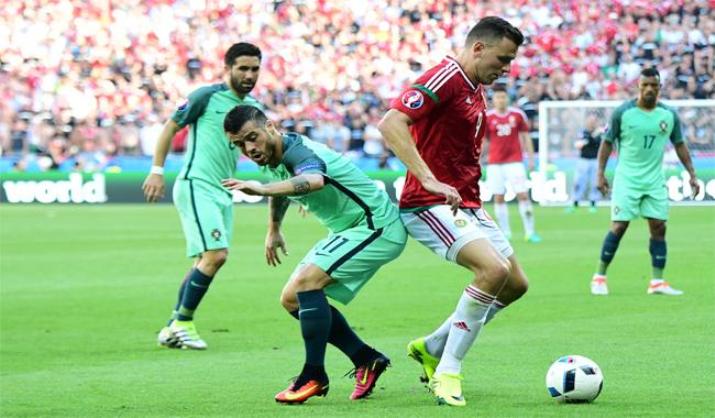 Hungary’s rollercoaster 3-3 draw with Portugal was not just the most entertaining match of Euro 2016 so far, but also the game of Balazs Dzsudzsak’s life.

The Hungary captain’s two-goal haul matched that of Portuguese superstar Cristiano Ronaldo and helped propel the unfancied Magyars into dreamland with a last-16 showdown with Belgium in Toulouse on Sunday.

“My time came at last in this game, I had to wait a long time for it but patience finally paid off,” said Dzsudzsak.

The displays of one of the pre-tournament rank outsiders have sparked wild celebrations in Budapest with thousands bringing traffic to a standstill.

After the Portugal match, with replays of Dzsudzsak’s two goals in the background, Hungary’s most famous football commentator even recited an ode in his honour on national television.

With Dzsudzsak beating his chest while singing Hungary’s national anthem together with the fans after each game, Euro 2016 has been cathartic for both the player and the success-starved country.

To put Hungary’s achievement into perspective, the 29-year-old was not even born the last time his nation took part in its last major tournament, the 1986 World Cup.

For almost a decade though the blond winger has been Hungary’s talisman, their most valuable player, and the nearest the Magyars have come since the 1980s to producing a star.

A baby-faced village boy from remote eastern Hungary, his breakthrough came in 2007.

His speed, pinpoint crossing and goalscoring threat, particularly from dead-ball situations, made him a key figure for Hungarian club Debreceni VSC in the third season of a three-in-row title-winning run.

His performances caught the attention of a scout from Dutch giants PSV Eindhoven, and Dzsudzsak made his Eredivisie debut in 2008 to the delight of Magyar fans who watched his games broadcast live on Hungarian TV.

He was top scorer for PSV in the 2010 and 2011 seasons and their fans loved the way he tormented arch-rivals Ajax, nicking five goals and three goal passes against the Amsterdam side in seven games.

After 55 goals in three and a half seasons in the Netherlands, Dzsudzsak was drawing comparisons with Dutch legend Arjen Robben, and the attention of clubs including Juventus, Liverpool and Villarreal.

Aged 24, he seemed poised for a leap into the big time, but he dismayed fans at home yearning to see a Hungarian at the very top when he opted for a move to the ambitious and cash-rich Russian Premier League side Anzhi Makhachkala.

“It’s true I didn’t go to a top club as many were expecting of me,” Dzsudzsak said at the time. “But this club has a bright future, within four years it will be doing well in the Champions League.”

It was not to be. After an injury-plagued spell and just eight appearances for Anzhi, Dzsudzsak was sold to Dynamo Moscow in 2012, but scored just 19 goals in three years.

He has spent the just-completed season at Bursaspor in Turkey, but the Hungarian’s form was patchy and he was often relegated to the bench while some fans complained about his work ethic.

In contrast to Dzsudzsak’s waning club career, his performances for the national team have only improved with age.

Accused in the past of under-performing for the national team, he was handed the captain’s armband in 2014, and rescued the Magyars’ faltering Euro 2016 qualification campaign with a free-kick equaliser to win a point against bitter foes Romania in Bucharest.

And while he scored just three goals all season for Bursaspor, his two goals in Lyon against Ronaldo’s men have earned him a place in Hungary’s rich football history. – Agence France-Presse