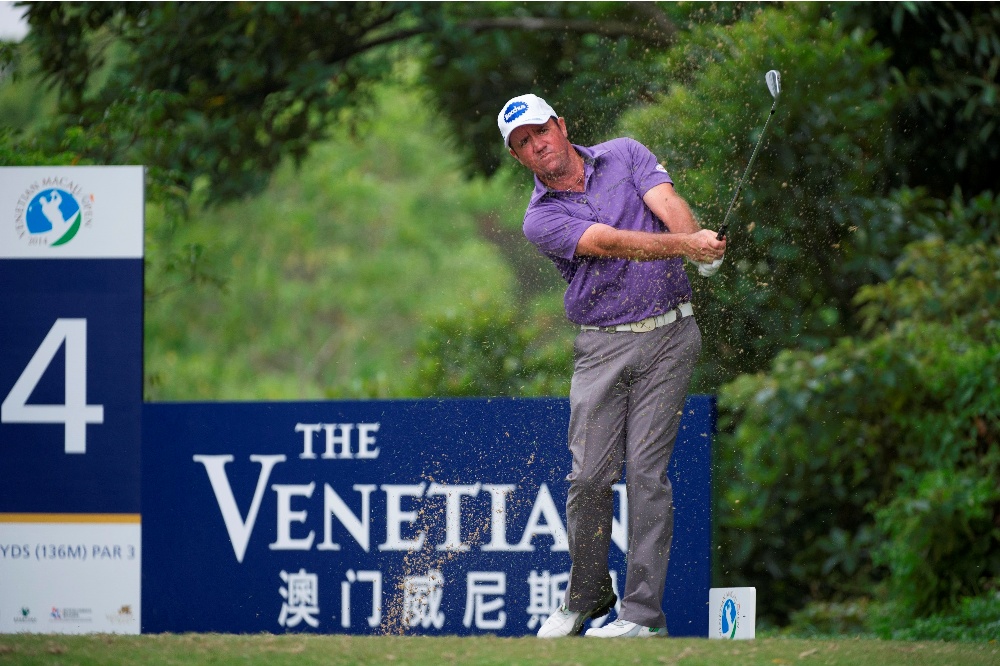 Title holder Scott Hend of Australia fought his way into a share of the halfway lead with countryman Adam Groom as he kept up his chase for a second successive victory at the US$900,000 Venetian Macau Open on Friday.

Winner in Hong Kong last weekend, the long-hitting Hend survived blustery conditions at the Macau Golf and Country Club to post a one-under-par 70 and a 10-under-par 132 aggregate which was matched by Groom, who carded a 67.

Switzerland’s Martin Rominger, with wife Simona on the bag, overcame a double bogey to card a 68 and lie one back while Chinese Taipei’s prospect Chan Shih-chang produced the day’s best with a 64 for joint fourth place on 134 with overnight leader Anirban Lahiri of India, who struggled to a 73.

After opening with a 70 on Thursday, Ernie Els of South Africa, the  tournament’s top draw, could only manage a 72 and will enter the weekend rounds a massive 10 shots behind the leaders. Spaniard Miguel Angel Jimenez missed the halfway cut set at 142 by two after adding a second straight 72.

Hend, 41, birdied his last hole, the ninth, from close range to put himself in the hunt for a seventh Asian Tour victory. He dropped two shots over his first seven holes before clawing his way back with four birdies against another bogey.

“Today, we’ve seen what can happen out here. If the wind blows like this, you just try to hold on to your score. We were struggling. You have to play conservatively and hopefully roll in some putts. Everyone will make a bogey,” said Hend.

“Sometimes it’s two and a half club difference. Even on the par fives on the back nine, with the exception of 18, it’s
ridiculously difficult. If I had made 18 pars, I would have been ecstatic. To come in with one under I’m quite happy.”

Despite being in top form, Hend is not thinking too far ahead in his hope of joining Zhang Lian-wei of China as the only men to win two Venetian Macau Open titles. “It’s Friday, it’s 36 holes to go. I’m just plodding along. Today was just the trotting day. No galloping, just trotting,” he smiled.

Groom, rookie of the year in 2004 but still seeking a breakthrough victory, ripped a monster drive on his last hole, the ninth, to set up a four-foot birdie to tie Hend. “I’ve not been in the final group for a while and Scott is in form. He’s a great player and I’m looking forward to the challenge,” said the 35-year-old Groom.

“Obviously it’s a goal this year (to win). I’ve finished second a couple of times I think and it’ll be nice to hold a trophy. I think I’ve got the game, it’s just putting it together and managing your emotions. I’ll try to relax and get stuck to the process and hopefully it’s a good outcome.”

Lahiri, second on the Order of Merit, was disappointed to take 12 shots more than Thursday’s superlative effort of 61 as he posted three birdies against five bogeys. “It was windy but still it was not that hard,” lamented the Indian star.

“The greens were quicker and I couldn’t get my speed right with the putts. I couldn’t adjust to them. I’m playing well but I need to tighten up some loose ends. I’m still in with a great chance.”

Chan, who was given a Board exemption for the remainder of the year after winning three Asian Development Tour titles, produced eight birdies, including four in a row, to charge into contention.

“My home course is also very windy, so this is no problem for me,” said the 27-year-old. “I’ll be happy if the wind blows. I like it. I hit it low and I’m not a long hitter. This course is short and you just want to hit it straight, straight, straight.  Strong wind, I’m not scared.”

South African star Ernie Els, who is an honorary member and international ambassador of the Asian Tour, hopes to fire on all cylinders over the weekend to close the gap on the leaders.

“I was battling the whole back nine. Hopefully I can play some better golf. I’m not pleased. Last week, I struggled with some putts and hit the ball well but this week, the swing is not quite there. If I can get it on the greens in regulation, I can make some birdies,” said Els.

Round 3 and 4 (Saturday and Sunday) of The Venetian Macau Open will be broadcasted live on TDM at 12-5pm.