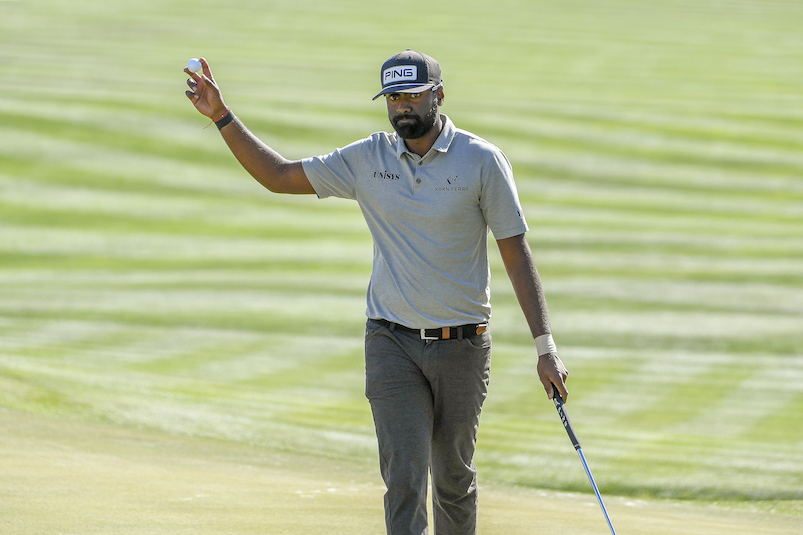 Two weeks after receiving a surprise sponsor’s exemption, Indian-American rookie Sahith Theegala finds himself in pole position for a maiden PGA TOUR title at the WM Phoenix Open. But first, he’s got to deal with some heavyweights in the game snapping at his heels.

The 24-year-old Theegala has eclipsed the stars so far through 36 hole at TPC Scottsdale in Arizona, with a second round of 7-under 64 propelling him into a two-shot lead on 12-under over defending champion Brooks Koepka (66) and Olympic Games gold medallist Xander Schauffele (65). Reigning FedExCup champion Patrick Cantlay is a further shot back after a 66.

First round leader K.H. Lee of Korea had to overcome an early double bogey to card a 70 as he slipped to equal eighth place on 7-under while Masters champion Hideki Matsuyama, who is a two-time WM Phoenix Open champion, enters the weekend in T13 following a second straight 68.

After dropping two bogeys early Friday when he returned in the morning to complete two remaining holes for a first round 66, Theegala, a former amateur star at Pepperdine University, began his second round in style with four birdies in his opening five holes and then finished with an aplomb with four more birdies in his closing six holes to extend his dream week.

“Pretty great. I haven’t had time to let it set in and hopefully I don’t think too much about it because obviously what I’ve been doing has been working, but, yeah, again, just thankful I’m here and trying to make the most out of the opportunity. No expectations at all, honestly,” said Theegala, who will play the third round with Koepka and Schauffele.

He showed a cool head despite a disappointing start to his day, and his ball-striking prowess has helped yield 15 birdies so far, which is the best haul amongst the elite field. “I wasn’t too upset about the way it started. Like I had a 15-footer to start the day, I put a good roll, just missed. And the next tee shot I put it under the lip of the fairway bunker and I’m like, okay, I can’t do much about that, right? And I knew if I kept putting the ball in the fairway I’m going to have scoring opportunities.”

Theegala, whose father emigrated from India to California, had initially planned to enjoy a week off after four straight tournaments but altered his plans after receiving the invitation to this week’s US$8.2 million showpiece. With the WM Phoenix Open known for its exuberant fans and party-like stadium atmosphere, Theegala’s parents and six other uncles and cousins joined in the trip to Phoenix and has since formed his cheering squad.

“Oh, for sure my family,” Theegala responded when asked who was having more fun.

“They’re such a great bunch, they’re so positive and the fact they drove out here just to support me and walk six hours and probably dehydrated out there and feet hurting and still cheering me on, it’s really cool to know that they’re there.”

Last October, Theegala, who was ranked No. 3 in the world amateur golf ranking, held the lead/co-lead through three rounds at the Sanderson Farms Championship before finishing tied eighth, his lone top-10 to date on TOUR, and he hopes the experience will push him towards a win. “That was a huge week for me. It was probably the best, golf stretch of golf I played. Some of the best ball striking I’ve ever had. So it was really great for me, knowing that when I’m playing near the top of my game that I’m able to compete. That was the biggest takeaway I had from that week, because the fact that I was able to put myself in contention,” said Theegala, who earned his PGA TOUR card through the Korn Ferry Tour Finals last year.

Korea’s Lee, winner of the AT&T Byron Nelson last season, made a mess of his third hole, a par-5, as he ran up a double bogey but birdies on Hole Nos. 9, 11 and 15 kept him in contention for a second PGA TOUR title.

“It was tough day. Making double bogey on a par 5 made it harder. I was having a meltdown and was upset with myself. I tried to think positively knowing the fact I get to play out here. I tried my best to bring myself up and did not give up. That helped me and brought some great chances. I’m quite satisfied with my play,” said Lee, who finished joint runner-up to Koepka here last season.

“The leader is five ahead but if I focus on playing my own game, something could happen. It’s my favourite course so I’m going to give it my best shot.”