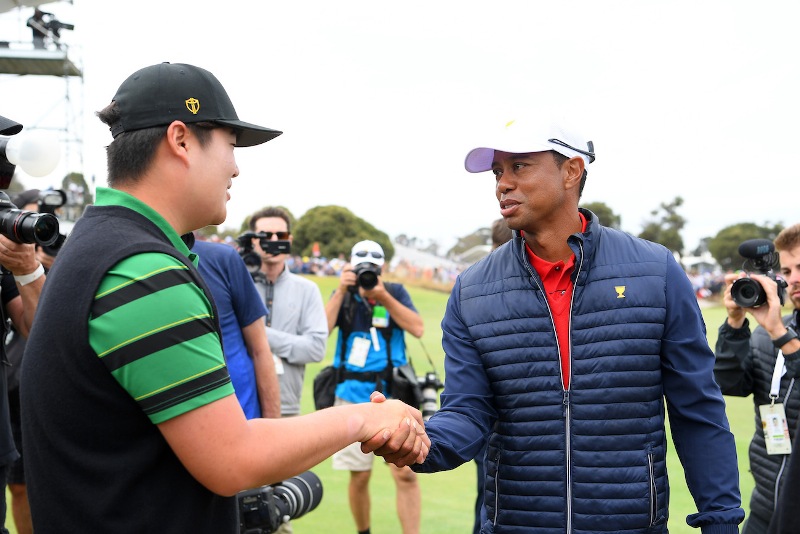 The International Team suffered a gut-wrenching 14-16 loss in the Presidents Cup on Sunday after the United States Team staged a an historic fightback in the Singles session, led by playing captain Tiger Woods.

Woods, who put himself in the top match at The Royal Melbourne Golf Club, defeated the previously undefeated Abraham Ancer 3 and 2 whichrallied his men to come from two points back to win the session 8-4. It was the first time a team has won the Presidents Cup when trailing into Sunday’s Singles.

Already a holder of 82 PGA TOUR victories, the 43-year Woods surpassed Phil Mickelson for the most wins in Presidents Cup history with 27 and was undefeated for the second time in the event, going 3-0 this week. He was 5-0 in 2009.

Leading 10-8 into the final day after some inspired performances in the Four-Ball and Foursomes sessions, the International Team, captained by Ernie Els, could not prevent the U.S. juggernaut from claiming its eighth straight Presidents Cup victory, with Matt Kuchar clinching the winning half point with a tie with Louis Oosthuizen in the penultimate match.

Korea’s Sungjae Im enjoyed a successful Presidents Cup debut by contributing 3.5 points which included an impressive 4 and 3 victory over reigning U.S. Open champion Gary Woodland in the Singles which for a while provided the International Team with a glimmer of hope.

Japanese star Hideki Matsuyama let slip a 4-up lead through 10 holes in the second match of the day against Tony Finau to settle for a tie while China’s Haotong Li went down 4 and 3 to World No. 2 Dustin Johnson. Chinese Taipei’s C.T. Pan fell 4 and 2 to Patrick Reed as his debut ended with a 2-1-0 record.

Els was proud with how his International Team, which featured seven rookies, battled against the powerful American side. “It’s been an incredible week. The players were just incredible. They were open for a new formula, so to speak, and embraced what I said to them, and you know, here we are. You know, we lost 16-14, and you know, we’ve got to swallow that,” said the South African legend.

“But great strides were made, especially in our team play. I really felt that our team play was really the core of our team, and that never was previously. We never felt like we could play Foursomes or Four-Ball together as a team. We did that well.

“I think the U.S. Team, and I think you guys (media), and the people around the world will look at these (International) guys in a different way. If you compare our team on paper with other teams in other sport, you would have laughed us out of the building. But we gave it a hell of a go and we came mightily close to winning and upsetting one of the greatest golf teams of all time.“

If you look at their record and where these guys are at the moment, they are going places; I can tell you that. We do have Major champion winners up here. We do have No. 1s, former No. 1s, but we also have had guys playing for the first time, and I can only see their future going in a very – in a great manner.”

Im, the 2019 PGA TOUR Rookie of the Year and a captain’s picks, was disappointed to walk away with a defeat for the team despite his impressive debut which had the American players commending his good play.

“I really tried my best to score a point for the Internationals, and I’m happy to have done that and I really wanted to beat Gary. It was a good match. I was hitting the ball so well, especially when I was warming up on the range. I felt like my ball-striking was so well and I knew that if I putted well, the match would end well. So I’m incredibly happy with the way things turned out.”

Being the first golfer from Mainland China to feature in the Presidents Cup, Li couldn’t get his putter to get hot as he went down to Johnson. “I actually felt good, especially on the back nine. I made a lot of mistakes on the front side and gave him a few holes. Although I played only two matches this week, I feel I’m really good now. I hope I can play some good golf on such occasions next time,” said Li.

“I think it was good experience and it was great being in this team. I’m looking forward to the next Presidents Cup. I am young, and I have a long, long time. I don’t know how many more President Cups I will play in the future. This is just the beginning,” he said.

Pan won his two fourball matches playing alongside Matsuyama but couldn’t prevent Reed from running away with a point for the U.S. “The result is not what we wanted,” said a dejected Pan, who won his first PGA TOUR title in April.

“The team bonding was good. Just the whole team experience, being part of the team activities, it’s something I’ve never experienced. Hope to be on the next team again.”