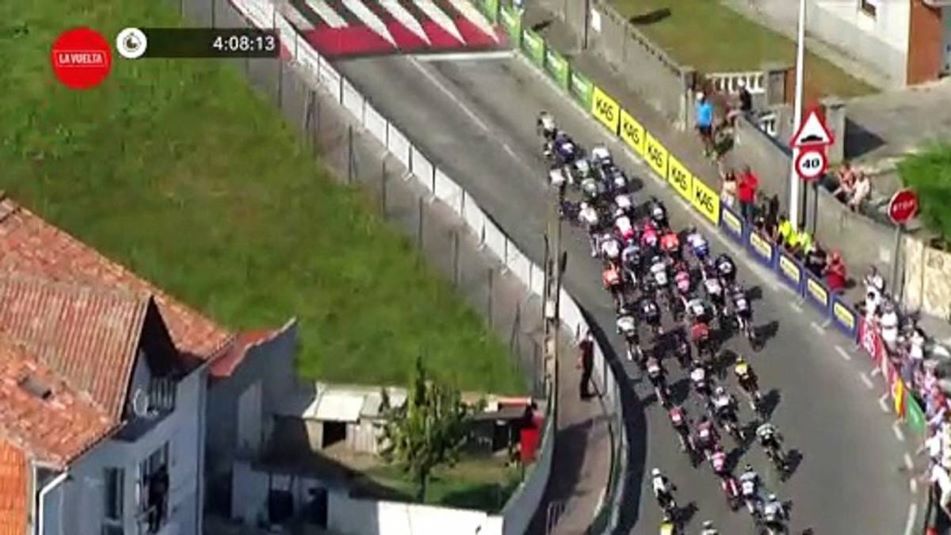 Fabio Jakobsen celebrated his 25th birthday in style as he powered to his third stage win in La Vuelta 21, on Tuesday, in the streets of Santa Cruz de Bezana.

The Dutch sprinter was momentarily dropped when UAE Team Emirates put the hammer down inside the last 60km, but his Deceuninck-Quick Step companions made sure he could claim glory and make this edition of the Spanish Grand Tour his most successful stage race, after he took two wins in 2019.

Odd Christian Eiking (Intermarché-Wanty-Gobert Matériaux) perfectly handled the traps of the day. A whole different challenge awaits him on Wednesday with the summit finish at Lagos de Covadonga.

After the second rest day, 161 riders return to action for the last week of La Vuelta 21, with a flat but tricky stage from Laredo to Santa Cruz de Bezana (180km). It’s a fast start and many riders hit the deck after 4km of racing.

Among them, Guillaume Martin (Cofidis) and Enric Mas (Movistar Team) quickly return to the bunch. Giulio Ciccone (Trek-Segafredo) requires medical assistance with a knee injury but he resumes racing, and so does everyone else involved in the crash.

Team DSM, Groupama-FDJ and Deceuninck-Quick Step work at the front of the bunch and the gap never gets higher than 2’30’’. Meanwhile, it takes some 30km of chasing for Ciccone to return to the bunch.

The Italian climber, who was 12th overall ahead of the stage, eventually throws the towel after 100km of effort. Sep Vanmarcke (Israel Start-Up Nation) and Rudy Molard (Groupama-FDJ) also abandon.

The intensity increases on the only categorised climb of the day, the cat-3 ascent of Alto de Hijas (4.2km at 6.5%). With a gap down to under 1’, several riders attack from the bunch. Harm Vanhoucke (Lotto Soudal) is the only one who manages to bridge the gap to the early attackers with 65km to go.

UAE Team Emirates put the hammer down inside the last 60km. The peloton splits and Fabio Jakobsen is among the riders off the back. But, on his 25th birthday, his Deceuninck-Quick Step teammates bring the Dutch sprinter back in the front group with 48km to go.

The Wolfpack strike back

The breakaway give their all on the ups and downs inside the last 20km. Vanhoucke is dropped with 14km to go, and the peloton only trail by 20’’. Dewulf eventually goes solo inside the last 10km. He is eventually caught 4.5km away from the line.

The battle for positioning is an intense one inside the twisty final kilometres. And in the end, the Wolfpack prevail with Fabio Jakobsen sprinting to victory, ahead of Jordi Meeus (Bora-Hansgrohe) and Matteo Trentin (UAE Team Emirates). – www.lavuelta.es