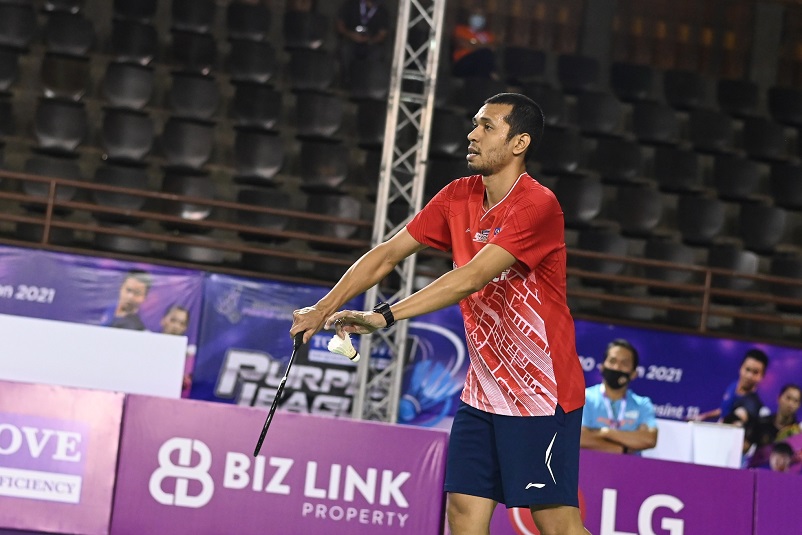 In the midst of the New Year 2021 celebrations, the Top Glove Purple League Pro-Am 2020 continues to be a lively event as it reached its peak with the finals set for this Sunday.

As expected, the men’s singles action will see Soong Joo Ven and Iskandar Zulkarnain do battle in the final to decide the title.

Joo Ven, who was placed as the top seed filled the top two slots after beating Lim Chi Wing in the semi-finals today.

“I was lucky in the deciding match, I changed my strategy and the opponent could not counter-attack. We have been playing against each other since the age of 13.

“Our level of play is almost the same. So matches between us were always going to be close and the winner determined only on the performance of the day, “said Joo Ven.

For the year 2021, Joo Ven has also set a personal target.

“I hope this year, I hope to achieve the target to be in the top 30 in the world which means I will be able to participate in the BWF 750 and 1000 competitions,” added Joo Ven again.

The other finalist in the men’s singles event was Iskandar Zulkarnain who fended off the challenge from Muhd ​​Izzuddin Shamsul Muzli to win 3-2.

Iskandar explained that patience was the key to his success today because it was quite difficult to win points when the opponents play aggressively.

“The experience I have allowed me to lure my opponents to exert more energy and physical play. That made it difficult for them to change the way they play.

“With age comes wisdom and to change the way I play when I am faced with difficulties,” added Iskandar.

For 2021, Iskandar also hopes that the targets he has set for himself can be achieved.

He is currently gaining management knowledge and is in the process of transitioning from player to management to form clubs in the future.

Commenting on the upcoming final of the men’s singles, Iskandar admitted that while he can comprehend Joo Ven’s playing style, the final match will be quite intense nonetheless.