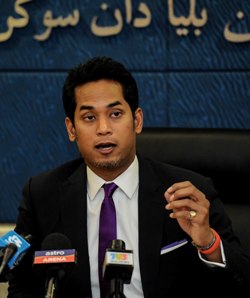 FOLLOW THE RULES: Khairy Jamaluddin hopes FAM and the Police can work to make matches safer.

THE Football Association of Malaysia (FAM) and the police must meet and find ways to improve security at stadiums when the national team is involved in a match, especially against foreign teams.

Sports Minister Khairy Jamaluddin said beefing up security at stadiums was important to ensure prohibited items like flare, smoke bombs or firecrackers are not brought into the stadium and thrown onto the pitch by fans.

“We must always remember the security aspects because all this while we have been lenient with fans who set off flares, smoke bombs and firecrackers, but what happened last night was serious and stern action must be taken” he told Bernama when asked to comment on flares let off by Malaysian fans calling themselves ‘Ultras Malaya’ during a friendly match between Malaysia and the Philippines at the Selayang Stadium, yesterday.

Due to the flares, thick smoke engulfed the pitch, forcing the match to be stopped for 31 minutes, thus affecting the rhythm of the match which ended 0-0.

Khairy also urged the police to submit a report to the FAM over the incident since the match was affected.

“If letting off flares or fireworks can affect the match, it cannot be accepted or condoned. This is a serious breach of security,” he said.