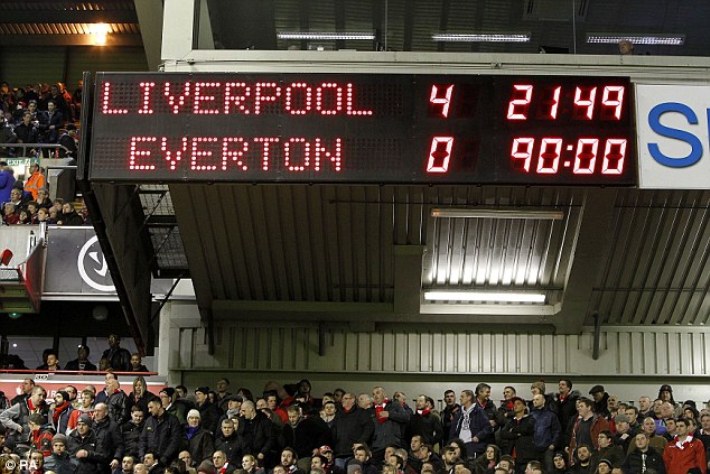 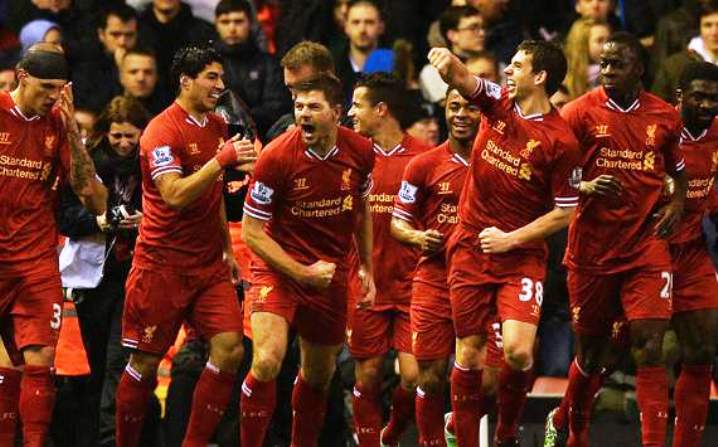 Liverpool manager Jurgen Klopp refused to get carried away after his rampant side crushed neighbours Everton 4-0 in a one-sided 226th Merseyside derby at Anfield.

Wednesday’s Premier League encounter was little short of a humiliation for the visitors, who finished the match with 10 men after Ramiro Funes Mori’s second-half red card.

In truth, the match was already over by then as first-half headers from Divock Origi and Mamadou Sakho set the Reds on the path to victory.

Straight after the break, Funes Mori clattered Origi in a shocking tackle, for which he received his marching orders, and Liverpool then twisted the knife even further with a second-half showing of complete dominance.

Substitute Daniel Sturridge –- on for Origi, who was stretchered off — slotted past Joel Robles to add a third after an hour before a wonderful strike from Philippe Coutinho capped off a memorable night for the home side with 14 minutes remaining.

But while Klopp admitted that his team are enjoying their football, Origi’s injury took some of the gloss off the win and the German said that the margin of victory could be partly explained by Funes Mori’s exit.

“We did well. Usually after a 4-0 win I don’t know how to keep the smile of my face, but tonight it’s pretty easy,” Klopp said.

“In the first half it was a derby, so it was more wild than a normal football game, but it’s a derby so you accept this.

“We could have done better, but lost some patience in the wrong moments. We forced some things too early and we didn’t have the movements, especially not behind the line.

“But of course the two goals were at the perfect moment and what can I say about the second half?

“It changed completely with the second half and when (Everton’s John) Stones also had to come off. It was not easy for Everton.

“We are in a good moment –- that’s how it is. We made good chances and we could have scored more.”

“I didn’t see the pictures, but it was a big shadow on the game,” Klopp said.

“It’s not broken. I went into the medical room and saw him smiling. The ankle is twisted and we have to wait to see what happens to the ligaments now.”

Everton manager Roberto Martinez is now under fire like never before.

After a series of insipid displays this season, particularly at Goodison Park, the Spaniard is rapidly running out of support on the terraces.

He hit back at his critics in the week and claimed he has moved the club on since replacing David Moyes in 2013.

But he had no excuses following this destructive defeat and admitted that it was the worst possible preparation for Saturday’s FA Cup semi-final clash with Manchester United at Wembley.

“It was disastrous,” he said. “It was a horrible showing that started with the best intentions, but ended with an inability to do the basics right.

“It was shocking, it was a horrible experience for everyone connected to the football club and it was a game that turned on us not defending well enough before half-time.

“We lost concentration. We give them a soft cushion with two goals before half-time and that was a massive blow.

“Nobody representing Everton deserved to be in that chain of events, but that is football. We have to reward our fans with a proper performance in the FA Cup semi-final now.” – Agence France-Presse