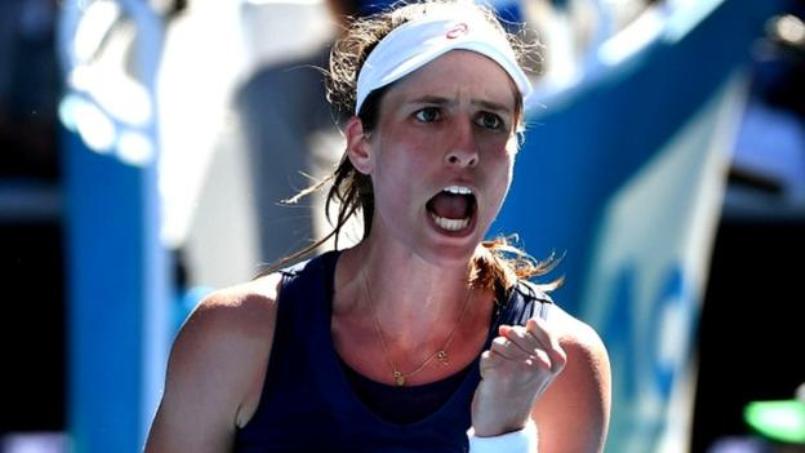 The British ninth seed, who made the semi-finals last year to kickstart a breakthrough season, banished the Danish former world number one 6-3, 6-1 on Margaret Court Arena.

It sets up a showdown with Makarova, also a former Melbourne semi-finalist, who upset sixth seed Dominika Cibulkova in three hard-fought sets.

Is she comes through that test, the mighty Serena Williams is a potential quarter-final opponent.

“I really asserted myself from the get-go. I definitely played a high level today,” she said. “Caroline really makes you work for it. I’m definitely happy with my level.”

Konta, who is yet to drop a set, had never played Wozniacki before, making for an interesting battle.

The Briton, 25, kept the Dane on the move, pushing her around the baseline as she looked for an opening, which came in the seventh game when she worked Wozniacki wide and came to the net to smash a volley winner.

The confident, Australian-born Brit wasted no time in holding serve then breaking again to secure the set in 42 minutes, hitting an incredible 20 winners to Wozniacki’s one.

Konta, who won the lead-up Sydney International, likes to play high on the baseline, taking the ball early and dictating the point, a tactic that left Wozniacki struggling.

She broke the 20th-seeded Wozniacki to go 2-0 in front with the Dane, who prides herself on being one of the fittest on tour, having no answers to a player on a hot run of form.

It was one-way traffic as Konta raced to the finish line, leaving a dazed Wozniacki, who has put injury struggles aside and enjoyed a resurgence over the past year, left to wonder what hit her. – Agence France-Presse