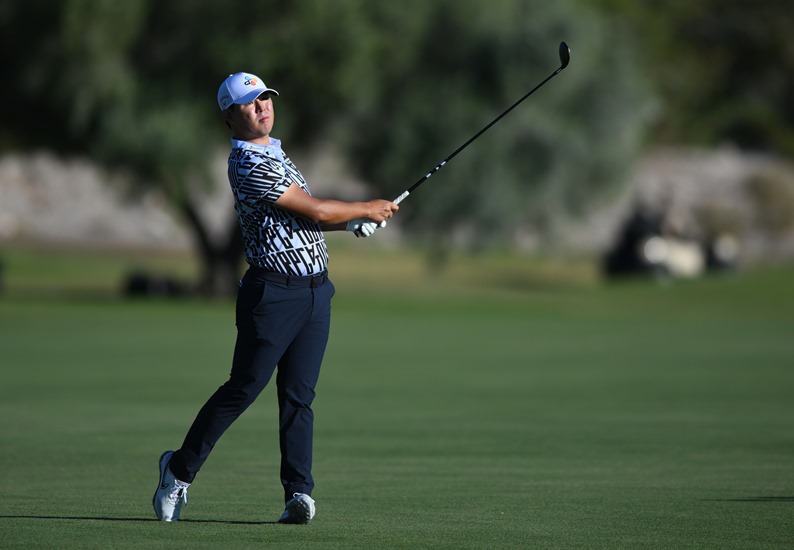 Si Woo Kim brilliantly led the Korean charge as he and Presidents Cup teammates Sungjae Im and Tom Kim got off to rousing starts at the Shriners Children’s Open on Thursday. Korean rookie S.H. Kim also decided to join the party.

Si Woo, who emerged as the leading points earner for the International Team with three points at Quail Hollow a fortnight ago, fired a stellar 7-under 64 to lie one back of first round leader Tom Hoge at TPC Summerlin in Las Vegas.

Seeking a fourth PGA TOUR victory, the 27-year-old Si Woo notched eight birdies to offset a lone bogey as his new partnership with caddie Manuel Villegas, who is the younger brother of Colombia’s Camilo, continued to flourish.

Defending champion Im, who won by four strokes last season after a final round 62, rising star Tom Kim and rookie S.H. Kim made it a glorious day for the Koreans by registering matching 65s to tie for the fourth place.

Smooth-swinging Im traded seven birdies, including three closing birdies, against a bogey while 20-year-old Tom, who thrilled fans at the Presidents Cup with his energetic and exuberant displays, kept the bogeys off his card and collected six birdies to put himself in contention for a second PGA TOUR win following his breakthrough triumph at the Wyndham Championship in August.

Having not missed a cut in his first two starts after graduating from the Korn Ferry Tour, S.H Kim continued to impress as well when he responded to an early bogey with seven birdies.

Another Korn Ferry Tour graduate, Carl Yuan of China opened his week with a 68 for T38, one ahead of Korea’s Byeong Hun An and Kevin Yu of Chinese Taipei in T55.

Si Woo was delighted with his start after hitting 11 fairways and 15 greens in regulation. He also did not miss a single putt from inside of 10 feet. Playing alongside Tom and Max Homa, he said: “Everything was feeling great this morning, the green conditions were great which helped me with the putting. I like to play early always.

“This whole day we started great and rode on each other’s momentum. It was just a couple of weeks ago we were playing together. It was really comfortable. I always like to play with Max. He’s such a nice guy and a great player. I always learn something from him. Tom Kim as well, and we’re good friends. We always hang out together. We still have good memories there. We still talk about the Presidents Cup, like some holes. Then I finished the hole, and Tom came over on 18 and I said, if you make that one, I got to ask you to go throw the hat like the last hole on Saturday (at Quail Hollow).

“There was so much tension and so much pressure on the Presidents Cup week. So now like too much calm and less pressure.”

Tom echoed Si Woo’s sentiments as he maintained his fine form from Quail Hollow where he contributed two points in the International Team’s 17.5 – 12.5 loss to the U.S. Team. “It was fun because obviously I had my partner (Si Woo) with me, my Saturday afternoon partner, and obviously playing with Max. We had so much fun,” said Tom.

“When your group kind of plays well, it’s just kind of like it helps you play. It gives you momentum when you don’t really have some.”

Im said he was glad to have overcome a tough start before getting his day going. “I had tee shot misses and as in second shots, the iron contact was not very good which gave me some hard time,” he said.

“But as I proceed to back nine, I had some good shots and putting was getting into the right spot. I think I had a decent round overall. This course, players are able to make many birdies if we have good shots. So I will be focusing on driver shots and short shots. I will give my best tomorrow,” he said.

Weather: Sunny. High of 92. Wind E 4-8 mph. The first round was suspended due to darkness at 6:29 p.m. PT and will resume Friday at 8:15 a.m. with three players (Eric Cole, Scott Harrington, and Philip Knowles) left to complete their round. The second round will begin as scheduled at 6:40 a.m.