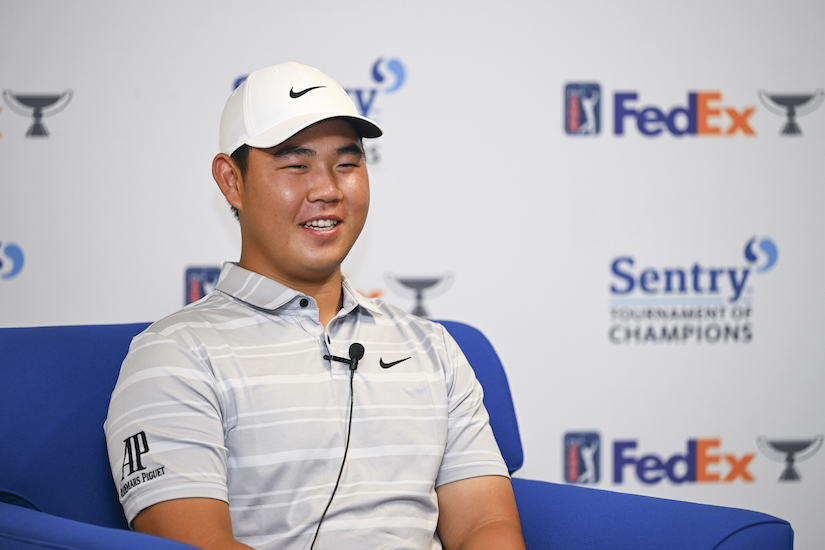 Asia’s newest golf star, Tom Kim, is ready to jump on another whirlwind ride on the PGA TOUR as he launches his 2023 campaign with a debut appearance at this week’s US$15 million Sentry Tournament of Champions in Hawaii.

The 20-year-old phenom is amongst a star-studded line-up at the Plantation Course at Kapalua in Maui which includes compatriots Sungjae Im and K.H. Lee, and 20 of the top-25 players in  the Official World Golf Ranking highlighted by World No. 2 Scottie Scheffler, Patrick Cantlay (4), Jon Rahm (5), Xander Schauffele (6), Will Zalatoris (7), Justin Thomas (8), Matt Fitzpatrick (9), Collin Morikawa (11), Jordan Spieth (14) and Hideki Matsuyama (21).

The Sentry Tournament of Champions is the first of 17 designated events this year with elevated purses and commitments from the TOUR’s top players, and is limited to TOUR winners from last year and the top-30 players on the final 2022 FedExCup standings,

“It’s a great place to start, obviously, in Maui. It’s my first time in Hawaii. The course looks in great shape. You’ve got amazing sights here. So to be in a field where not many people can get in, it’s awesome to be here and I can’t wait to have this week started,” said Kim.

The past 12 months have been a bit of a blur for the young Korean, who started 2022 without any PGA TOUR status but wrapped up the year with two impressive victories at the Wyndham Championship and Shriners Children’s Open. He was also a standout performer in the Presidents Cup and rose to 15th in the world where he is now the highest-ranked Asian golfer.

“It’s been a crazy 2022, and things happened so fast where I think this past off-season I was able to kind of reflect on what it was like, and it’s amazing,” said Kim. “I’ve had two wins and it’s really got me to feel a little bit more like I got to work harder and hopefully 2023 will be a better year than 2022.

“I think now, I feel a little bit more comfortable than I did before on the PGA TOUR. Obviously, winning big events is great, but like I just got to keep that same mindset as I’ve had my whole life and just kind of keep getting better every day. All those big events you win, it’s just kind of ticking off the boxes, but the biggest thing for me is just to be mentally better and be physically stronger and just get better at every aspect of the game every day, I feel like the goals just kind of happen.”

Such was his desire to start the year off on a strong note that he flew into the famous holiday isle on his own, without his parents in tow. “I kind of feel bad that I’m seeing this alone. So I’m going to wait until my next trip and I can bring some family and friends. I told myself my first trip, I want to kind of focus on my golf and maybe next time kind of enjoy a little bit more with family and friends … just been trying to stay focused on my golf,” said Kim.

He also reiterated his ambition to make a name for himself on the PGA TOUR. When he won at Shriners, Kim became second youngest golfer in history to win twice, even younger than Tiger Woods.

“My goal has never been fazed and I have never thought about anything else. It’s still going to be that way because I wanted to play on the PGA TOUR and nowhere else. I want to play where all the best players want to be. If you see Tiger’s career, Jack Nicklaus’s career, all these guys, they have come from the PGA TOUR and it has a legacy. So hoping to do the same and kind of stay here for as long as I can,” said Kim.

While it is still some three months away, Kim already has his sights firmly on his first appearance at the Masters Tournament in April, which is the year’s first major. “I’m excited for that one,” he said. “Hopefully I’ll be able to go there before the Masters. I’m trying to fit in some time (to practice there). I feel like I need to go there and let it out of my system before I go to the tournament.”

K.H. Lee, back at the Sentry Tournament of Champions for a second time, is eyeing a top-10 finish this week following the winter break as he outlined his goals for the New Year. “I’m really loving this tournament and wish to come back every year. Since it’s the first event of the year, I wish to be in top-10,” he said.

“I wish to win another event this year, and also want to perform well in the majors and be in contention. Also, I would like to qualify for the TOUR Championship again and win my third Byron Nelson trophy.”