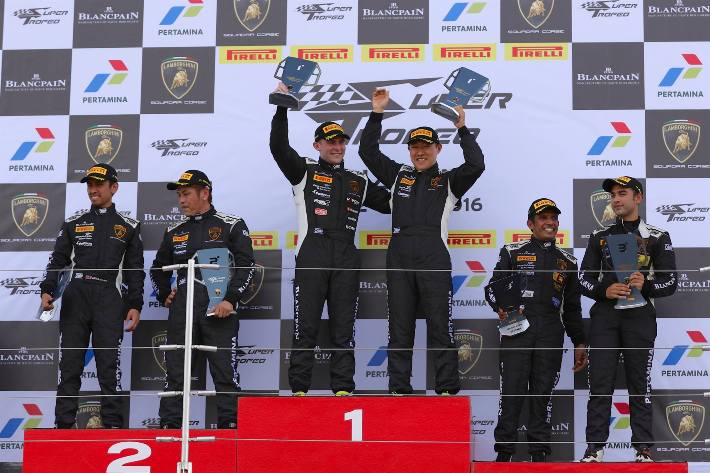 Kiwi Jono Lester took his maiden victory in the Lamborghini Super Trofeo Asia series over the weekend at Japan’s Suzuka circuit, triumphing by a 16 second margin with Japanese partner Yasuyuki Uchida in the Air-J Huracan.

As a past winner at Suzuka in the 2012 Super Taikyu series, Lester used his experience to score pole position ahead of race finishes in first and second place, elevating he and Uchida into second overall in the points standings after two of six rounds.

While the race one victory was relatively straightforward, damp conditions for Sunday’s second 50 minute encounter led to a three-way battle for victory with Italian Max Wiser and Malaysian Afiq Yazid, fitted with slick tyres on a slippery track; Uchida bringing the #23 car home in a strong runner up position.

Suzuka was the first of second rounds in the 2016 Lamborghini Super Trofeo Asia Series with further events, Thailand, Malaysia and a return to Japan at Fuji, before December’s World Final in Valencia, Spain.

The next round of the series is at the new Buriram circuit in Thailand on July 22-24.

This win is a fantastic breakthrough and for it to come so early in the season is really encouraging for our title chances. We need to keep this momentum up, but it’s consistency that will win us the Championship and as such the second race in wet conditions was a zero risk scenario where we had to be smart, not a hero. Uchida’s driving was brilliant at Suzuka and we are working really well together on and off the track. Buriram will be a new challenge and I hope to acclimatize quickly much like in Shanghai.