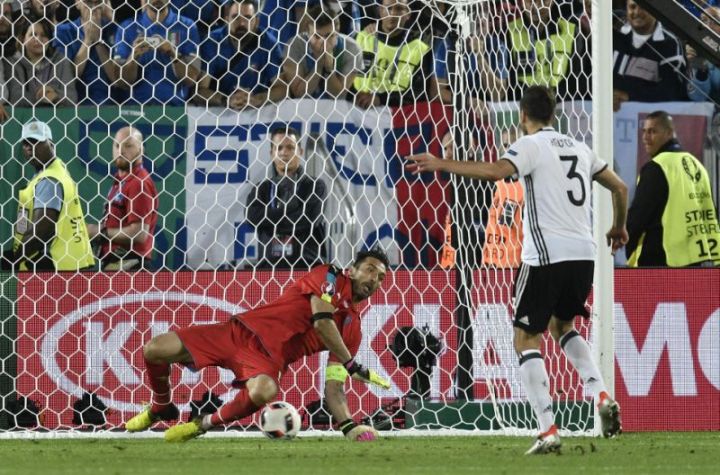 Joachim Loew hailed his team of “fighters” as Germany finally broke their Italy hoodoo by seeing off the Azzurri in a penalty shootout in Saturday’s Euro 2016 quarter-final.

Jonas Hector hit the crucial German penalty to seal the world champions’ 6-5 victory in Bordeaux to claim an historic win over Italy.

It was the first time Germany have beaten the Azzurri in nine attempts at a World Cup or European Championships finals.

“From a fighter’s point of view, it was amazing what the side did,” said Loew as Germany reached the semis at a Euro finals for the third time in a row.

The match finished 1-1 after extra-time as Mesut Ozil’s superbly-worked second-half goal was cancelled out by Leonardo Bonucci’s 78th-minute penalty.

Man-of-the-match Manuel Neuer was Germany’s hero in the shoot-out, saving shots by Bonucci and Matteo Darmian in the marathon 18-penalty battle.

But the world champion’s efficiency deserted them at crucial times at the Stade de Bordeaux.

Thomas Mueller, Mesut Ozil and Bastian Schweinsteiger failed to convert their shoot-out spot-kicks as nerves got to die Mannschaft’s stars.

But Loew was full of praise for Hector and 21-year-old Joshua Kimmich who nailed their penalties under intense pressure.

“The experienced players missed and the younger guys came through, so that’s quite positive,” Loew said.

“If you want to criticise anything, sometimes we lost the ball too easily.

“We had a chance for a second goal, but Buffon produced a save and then an Italian player stopped Mueller.”

Germany will face either France or Iceland in the Marseille semi-final next Wednesday as they chase a fourth European crown.

They will be without centre-back Mats Hummels, who is suspended after picking up his second yellow card of the tournament.

There is also a question mark over midfielder Sami Khedira, who was forced off early, while striker Mario Gomez picked up a leg injury.

“It wasn’t great to see Sami come off after just 15 minutes,” admitted Loew.

“He had problems with his hamstring, I don’t know if it is serious.

“Gomez had muscle problems, but I can’t say too much about it.

“We have to recover and look after some players because a game like this affects the body.”

Loew pulled a surprise before kick-off by naming a three-man defence in a deviation from the 4-2-3-1 formation, which beat Slovakia 3-0 in the last 16.

Loew said he decided to switch after watching Italy beat Spain in the previous round and after Germany beat Italy 4-1 in a friendly in March with the formation he used on Saturday.

“It was necessary. You have to change the side after a game like Slovakia which was very different,” explained Loew.

“We tried to close down the centre for Italy.

“After I saw the Spain game, that was my first thought.

“After the World Cup, I realised we had to change a little bit. We played a 3-5-2 against Italy in March and it worked.”

Loew said he expected France to squeeze past Iceland in Sunday’s quarter-final.

“We’ll have to see, France is going to be the favourite, they’re a great side with individual quality,” said Loew.

“Iceland are a battling team, who are organised in defence. It’s not going to be easy for France.

“I think if France manage to put quality on the pitch, then they will do enough to get to the semi-final.”

Loew dismissed any suggestion his players would be drained by the marathon against Italy.

“When you’re in the semi, of course, the goal is to reach the final. The players have to recover, but of course we want more,” he said. – Agence France-Presse