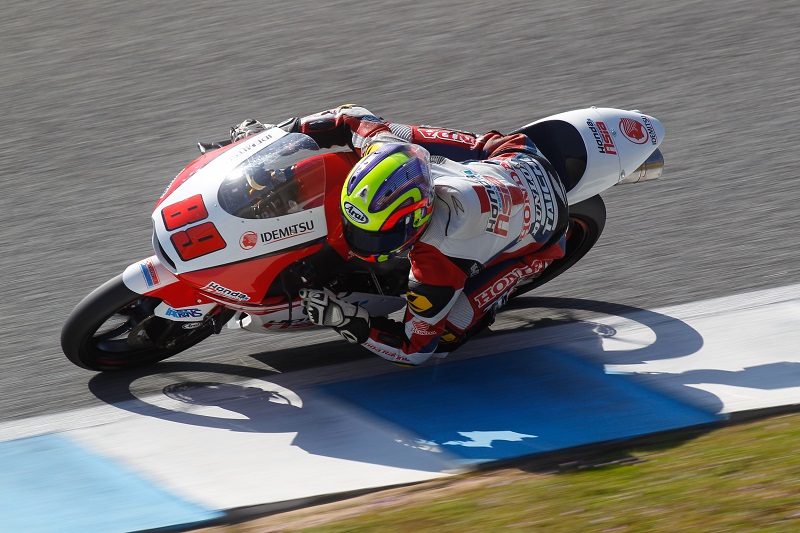 2016 Honda Team Asia launched out their journey into the Moto3 World Championship at three days ITRA official test in Jerez de la Frontera. With the team, 1992 born Japanese rider Hiroki Ono and the Malaysian 17 years youngster Khairul Idham Pawi are on board to fight for the championship with their Hondas; 2016 NSF250RW.

Last year, having made the fierce battle within the leading group, Ono has already shown his high potential. His objective for this year is to climb the podium and go beyond. Pawi, who took 6 th in CEV last year, has just started his new adventure in the world premier Moto3 championship.

During this three days test, Ono concentrated on finding a good base set-up and completed 90laps. His best lap time in this test was 1m48sec245, whilst Pawi is adapting his new environment in a decent way, and did 127laps in total. 1m47sec903 was his best lap time.

Now the team and riders are headed to Qatar for the next and final three days test at Losail international circuit from March 11 to 13.

Khairul Idham Pawi (22th, 1’47.903, 127laps : 3days total) “My target for this test was improving step by step with my lap time, finding a good setup, and adapting myself to the bike. We have made a good step forward and we can say it was a productive three days. For sure, I am in a learning process and still have many things to try. For the next test in Qatar, we will focus to improve more on everything, in order to prepare my first race in the World championship Moto3 class.”

Hiroki Ono (27th, 1’48.245, 90laps : 3days total) “In the second session of Day-3, we modified the setting of the bike to the similar one that I had a good feeling last year. I rode comfortable with it and improved my lap time. But at the end of the session, I touched with another rider and both of us crashed, which made me to miss the final session. It’s a pity because I had a good feeling with my bike. Anyway, we found a direction to follow and we can say it was a productive test for us.”

Tadayuki Okada – Team Manager “Having modified the setting of the bike, Ono improved his feeling of the bike. In the final session he could not join, we went to the trackside together and watched the behavior of fast riders. I hope he learned something from it and I would like him to think what he has to do to ride better and to find a good setting. Pawi is very young and in this test he concentrated on learning the racing lines and braking points. He learned what we taught quickly. I hope him to keep on trying in this way.”