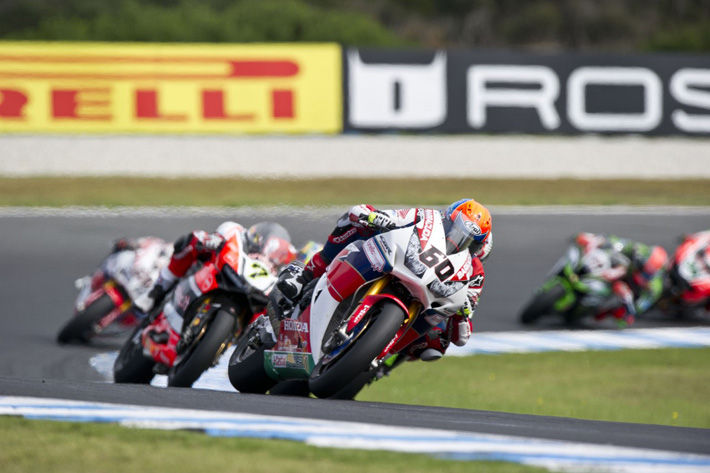 The Honda WorldSBK Team leaves Phillip Island on a high note as Michael van der Mark delighted the Australian crowd today with a second place finish at Phillip Island in race two – his career best result so far in the series. Nicky Hayden missed out on a podium finish on the last lap after a solid race at the front, making good progress aboard his Honda CBR1000RR Fireblade SP in what was his debut World Superbike round.

Both riders had another great start to the race and placed themselves near the front of the field in the opening laps. Van der Mark showed once again a great pace as he comfortably followed both factory Kawasaki riders around the 4.455km fast and flowing Australian venue. After moving up to second place, the 23-year-old Dutchman made a successful overtake for the lead on lap 12, which he kept for another six laps. In the final stages of the race, van der Mark did not lose touch with the leading duo and, as Davies crashed out at Honda corner while trying to take the lead, he moved up one place and retained the position at the checkered flag.

With one race under his belt and some adjustments made to his Fireblade machine settings after the warm up, Nicky Hayden was able to ride a more consistent race and, unlike yesterday, he stayed with the front pack for almost the whole length of the encounter. He entered the final lap in third place and did all he could to defend his position, but eventually he was overtaken by Davide Giugliano at Lukey Heights and had to settle for fourth.

As the first round draws to a close, Michael van der Mark lies second in the championship standings with 36 points, while Nicky Hayden is seventh – 16 points behind his team mate. The second round of the FIM Superbike World Championship will take place in a fortnight’s time at the Chang International Circuit in Thailand.

Michael van der Mark (Honda World Superbike Team)
Race result: 3rd / 2nd
“I got a great start and found myself behind Tom and Johnny. All I wanted in the first part was to save the tires, so I let them stay ahead. When Tom made a mistake I got up to second place and the pace improved a lot straight away. I didn’t want to lead but I got a good slipstream out of the last corner and passed Rea on the straight. I just tried to do my race at the front but then I saw on the big screen at turn 10 that the group was really big, so I tried to break it a little bit by pushing harder. It did work out, but I knew the last two laps would have been difficult for me. When Johnny and Chaz passed me I could hold on quite OK, I wasn’t really scared of them pulling away. Chaz tried a couple of moves for the lead and the last one didn’t work well; I tried to stay as close as possible to Jonathan but I made a small mistake, he didn’t so that was it. To finish second today is an amazing result, it’s been a great weekend and the team did an incredible job to improve the bike. We couldn’t have had a better start to the season.”

Nicky Hayden (Honda World Superbike Team)
Race result: 9th/ 4th
“I have to say thanks to the team because the bike today was so much better. Yesterday was very useful for us because we learned a lot about the bike set up, in order to make our pace last a bit longer. We were even faster than yesterday and that was a great sign. I enjoyed the race, although I was not quite quick enough to get to the front. On the last lap I knew Giugliano was there and I tried to protect my position a little bit going into Lukey Heights, then I kind of missed the line between turn 10 and 11. He squared it up and drove past me; I was trying to open the gas but all I was getting was traction control cutting in. I should have taken off more traction control in the last two laps. I’m definitely a bit disappointed for not getting onto the podium this time, it would have been great to celebrate my first round with a top 3 finish. Nonetheless, I’m happy to see the bike how competitive the bike is. We have learned a lot here at Phillip Island and now I’m looking forward to going to Thailand.”

Pieter Breddels
“What a good finish to the weekend! Michael rode a great race. We tried something in the warm up, but in the end we went back to yesterday’s settings. We made some adjustments to the electronics to find even more tire durability and he was able to get another fantastic start. He stayed with the front group for the whole race and even led for a good number of laps. In the end, he was second and that was an amazing result, definitely the icing on the cake of a great opening weekend. Well done to him and his crew. With Nicky we tried some different front settings this morning and they worked quite well. He also managed to stay with the front group and in the end, he had a chance to go for third place but lost a little bit of drive out of the last corner and narrowly missed on it. It was a good result for him anyway, it showed how much we were able to improve from yesterday. Let’s not forget it was his first race weekend with the bike and on Pirelli tires.”