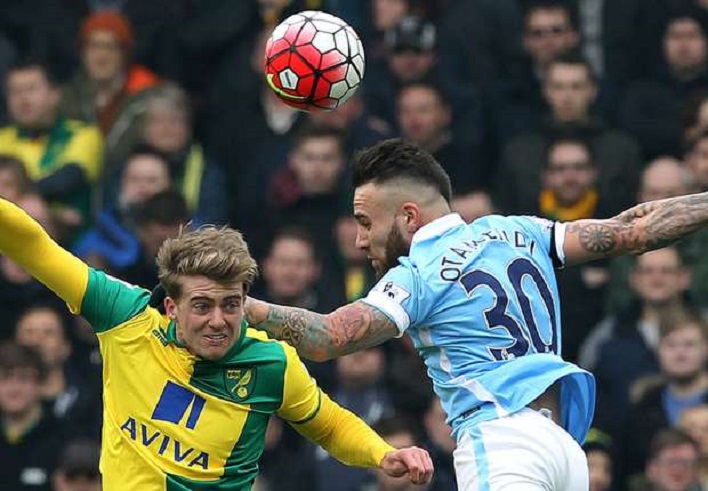 Victory would have taken City above Arsenal into third place, but instead they remain fourth, only two points above fifth-placed West Ham United, with Manchester United two points further back.

Pellegrini paired Sergio Aguero with Wilfried Bony in attack, but it was Norwich who came closest to scoring when on-loan Chelsea striker Patrick Bamford rattled the crossbar from 25 yards shortly before half-time.

“We are disappointed,” said Pellegrini, whose side take a 3-1 lead into the home leg of their Champions League last 16 tie with Dynamo Kiev on Tuesday before visiting Manchester United in the derby next weekend.

“We tried to be aggressive with and without the ball. We had a good attitude, but we could not create space. Of course we should create more in the last third. We were static up front.

“Every time that you drop points it is harder, but you must continue thinking in a positive way. We must always try to win the title while we mathematically can.”

Norwich have taken just two points from a possible 30, but although the result kept them in the relegation zone, manager Alex Neil took heart from his team’s battling display.

“We will see at the end of the season how significant that point was,” said the Scot. “I couldn’t ask any more from our players in terms of effort and endeavour.

“Last time Norwich got relegated (in 2014) they were five points above the relegation zone with seven games to play, so there’s no reason why we can’t catch some of those above us.”

Italian striker Graziano Pelle ended a 13-game scoring drought with a double as Southampton stole a march on Stoke City in the race for European qualification with a 2-1 win at the Britannia Stadium.

Pelle headed home from a Steven Davis corner and then saw a tame shot beat Stoke goalkeeper Jack Butland, before Marko Arnautovic reduced the arrears early in the second half.

Bournemouth twice went ahead, through Max Gradel and Josh King, only for Swansea to hit back on each occasion courtesy of Modou Barrow, who became the Premier League’s first Gambian goal-scorer, and Gylfi Sigurdsson.