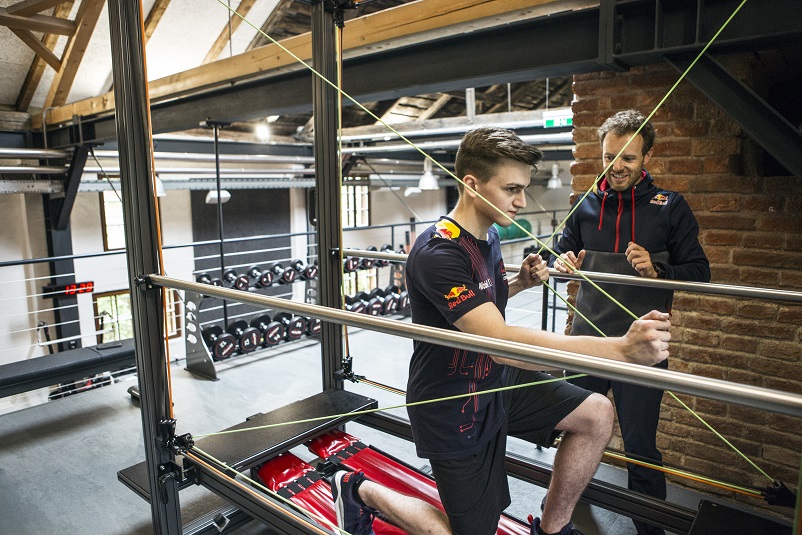 Red Bull Racing Esports drivers Frede Rasmussen and Marcel Kiefer were put through their paces at the Red Bull Athlete Performance Centre (APC) to improve their physical and mental performance ahead of the F1 Esports Pro 2020 season.
The pair were flown to the APC in Austria for three days of training and testing. The APC was set up by Red Bull to help elite athletes better understand their body and mind, enabling them to reach peak performance.
During their time at the APC, Frede and Marcel were given access to nutritionists, physiotherapists, psychologists and personal trainers.
The Red Bull Racing Esports team are now fully prepared for the start of season and Marcel benefitted from his visit to the APC, “The APC covers every single aspect that you need as an athlete – more than you would expect,” he said. “I learnt that my daily routine and schedule is everything, I kind of knew that already, but it’s different when you have people analysing you. Having a clear structure to my day affects every aspect of my life, not just racing. I really enjoyed my time at the APC, it was really cool, I was sad to leave. They helped us so much and I feel it will give us a big step up in our performance this season.”
Frede played a key role in securing the 2019 F1 Esports Series Team Championship for Red Bull and also enjoyed his time at the APC, “All the people there were really welcoming, and you could tell that they really wanted to help us become better athletes. I definitely learnt a lot about sleeping, and that I need to change my sleep schedule! I’m also trying to eat better. I’m feeling good going into the season. I’m just going to do my best and hopefully my best is enough to win again.”
The season kicks off today where over the two day event the drivers will race at Bahrain, Vietnam and China. Marcel adds, “I’m not here to finish second, I’m aiming for both titles. The competition is really strong, so we will have to fight hard to win both championships!”
Although Timo did not attend the APC, he is still fully committed. Commenting ahead of the season “I’ve been working with the Red Bull Esports Team for two months now, we’ve been practicing a lot and finding good set up tweaks. My role is a bit different this year than I’m normally used to, but I’m working hard and trying to contribute as much as I can to defend the constructor’s title. My favourite track is Baku but sadly we aren’t racing there this year, my second favourite is Canada which I’m looking forward to!”