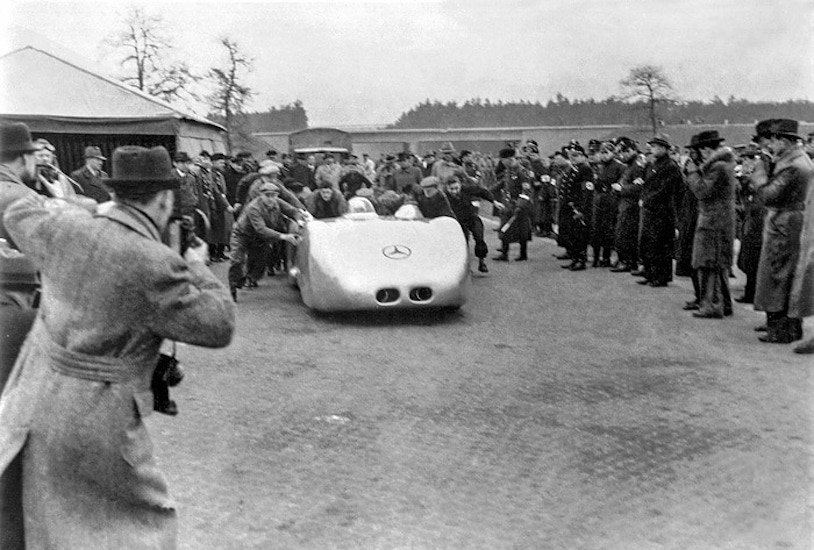 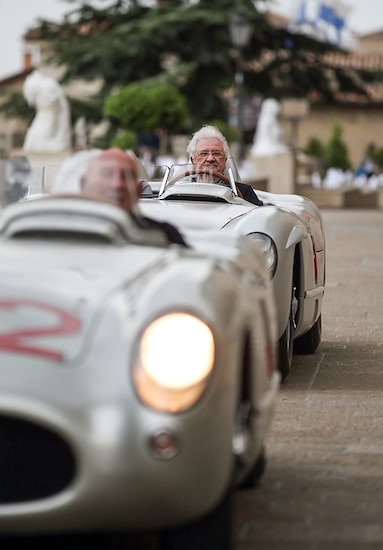 1998: Double victory in the Australian Grand Prix for McLaren-Mercedes (25 years)

Mercedes-Benz, the oldest automobile manufacturer in the world, has been involved in motorsport for almost 130 years. From Formula One to rallying, drivers are on the road under the sign of the star. This chapter in the company’s history is correspondingly diverse. Here briefly noted: important anniversaries and milestones from the motorsport chronicle.

In the gruelling 32nd Monte Carlo Rally from 20 to 24 January 1963, Mercedes-Benz wins the women’s classification that is usual at that time. The winners Ewy Rosqvist and Ursula Wirth receive the so-called “Ladies’ Cup”. In addition, there is a triple victory in Class 7 for vehicles from 2 to 3 litres of displacement.

The team starts in Stockholm in 1963. Ewy Rosqvist and Ursula Wirth finish 16th overall in their Mercedes-Benz 220 SE “fintail” rally car after a close decision in the final race in Monte Carlo and win the “Coupe des Dames”, which is awarded since 1927. Princess Gracia Patricia of Monaco presents the prize to the two Swedish rally drivers on 28 January 1963.

After the overall victory of the Rosqvist/Wirth team in the Argentine Touring Car Grand Prix in October and November 1962, attention is focused on the “Argentina winners” at the Monte Carlo Rally the following January.

Out of a total of 296 starters, only 27 teams finish. In this field, Mercedes-Benz dominates Class 7 with a one-two-three victory (Eugen Böhringer/Peter Lang, Onni Vilkas/Esko Vainola and Ewy Rosqvist/Ursula Wirth) and fifth place (Rolf Knoll/Rolf Kreder) – all in a Mercedes-Benz 220 SE.

In the 1930s, world record runs are as important as Grand Prix races. Mercedes-Benz and other leading manufacturers are chasing after new records. On 28 January 1938, there is a climax: the record-breaking cars from Mercedes-Benz and Auto Union compete against each other on a section of the Frankfurt–Darmstadt motorway.

Rudolf Caracciola, the most successful driver of an entire era, starts for the brand with the three-pointed star. He becomes European champion three times in the 1930s. The title can be compared to that of today’s Formula One world champion.

For the world speed record on public roads over the flying kilometre, the average value of the outward and return journey is determined. Caracciola reaches 432.7 km/h. This record holds for 79 years: it isn’t until 2017 that another vehicle is faster. The record-breaking Mercedes-Benz car based on the W 125 Grand Prix racing car has a drag coefficient of only cW = 0.157. It is powered by a 5.6-litre twelve-cylinder engine.

Two Roots superchargers increase the output to 541 kW (736 hp). Today, the record-breaking car is part of the permanent exhibition of the Mercedes-Benz Museum. During the record attempts, a tragic accident occurs: Bernd Rosemeyer is at the starting line for the competing Auto Union – and has a fatal accident during his record attempt.

More than 50 years after the end of his active career, Hans Herrmann is a very welcome guest at motorsport events. In his heart, the great racing driver is still connected to his sport to this day. The brand ambassador of Mercedes-Benz Classic is always friendly, approachable, and eloquent.

The Stuttgart-based driver first comes into contact with the Mercedes-Benz racing team in July 1953. The legendary race director Alfred Neubauer asks him: “Would you like to drive one of our cars?” Herrmann certainly would – even though he’s only been on racetracks for a year.

The scouting of young talents leads him directly to the Silver Arrows team. On 4 July 1954, Germany becomes football world champion – and Mercedes-Benz wins the French Grand Prix in Reims thanks to Juan Manuel Fangio ahead of Karl Kling.

Hans Herrmann retires but first sets the fastest lap with an average speed of 195.463 km/h with the W 196 Formula One racing car. In 1954, he achieves two podium finishes in Formula One. In 1955, he is the only one to follow his brand colleague Stirling Moss at the Mille Miglia with the 300 SLR, until an insufficiently closed fuel filler cap leads to failure.

He ends his career in 1970 after an overall victory with Porsche at the 24 Hours of Le Mans. He then begins a second successful career with his sales company for car accessories.

Double victory for the Silver Arrows at the Australian Grand Prix

On 8 March 1998, Mika Häkkinen and David Coulthard celebrate a double victory at the Australian Grand Prix. This marks the beginning of a very successful year in Formula One for McLaren-Mercedes. The German-British team competes for the first time in silver in 1997, the colour of the legendary Silver Arrows of the 1930s and 1950s.

The team comes together for the 1995 season. The roles are clearly assigned: McLaren takes care of the race car; Mercedes-Benz contributes the engine. It is developed and manufactured by Ilmor in Brixworth.

A small team of engineers in Untertürkheim under the direction of Mario Illien conducts basic research and tests on a high-tech engine test bench that is unique at the time. 25 years ago, the McLaren-Mercedes MP4/13 is used, the first racing car designed by star designer Adrian Newey for McLaren. 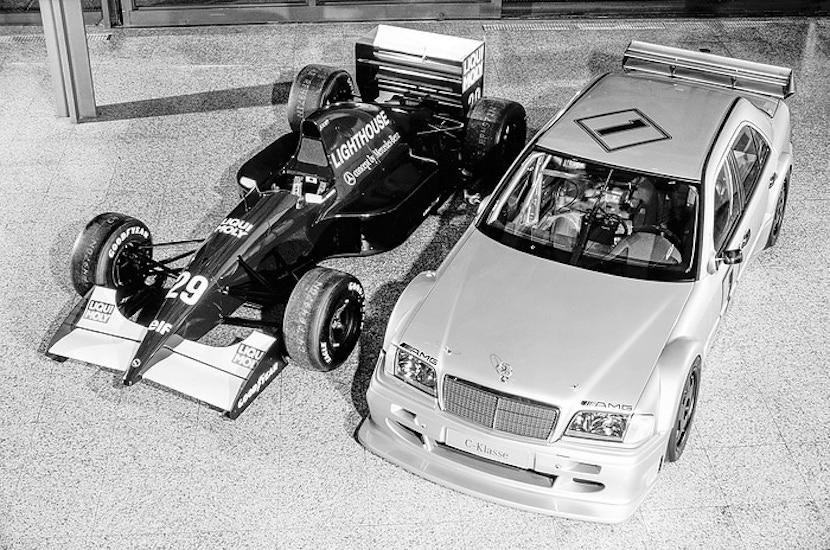 Outstanding entry of the Sauber team into Formula One

At the 1993 South African Grand Prix in Kyalami, the team of Peter Sauber from Switzerland takes the Grand Prix stage and is immediately successful: JJ Lehto finishes fifth with the Sauber C12. Peter Sauber remembers: “And this despite a pit stop because the electronic transmission control had to be changed.” At the end of the season, long-standing Mercedes-Benz Junior Karl Wendlinger finishes twelfth in the World Championship standings ahead of Lehto.

An official partnership between Mercedes-Benz and Sauber exists since 1988. Team Sauber-Mercedes wins the Group C World Sportscar Championship in 1989 and 1990 and the 24 Hours of Le Mans in 1989. On 28 November 1991, Mercedes-Benz announces that the company will withdraw from international motorsport.

Nevertheless, Peter Sauber dares to make the leap to Formula One with Ilmor engines bearing the lettering “Concept by Mercedes-Benz” – just like the sides of the racing car during the season. In 1994, Peter Sauber is officially supported with engines from Mercedes-Benz.

At the end of the year, they part ways when the McLaren-Mercedes team is born. Today, the team, which is introduced into Formula One thirty years ago with Mercedes-Benz support, is the fourth oldest in the premier class of motorsport after Ferrari, McLaren and Williams.