Home International Mikkelsen and Ogier in a league of their own 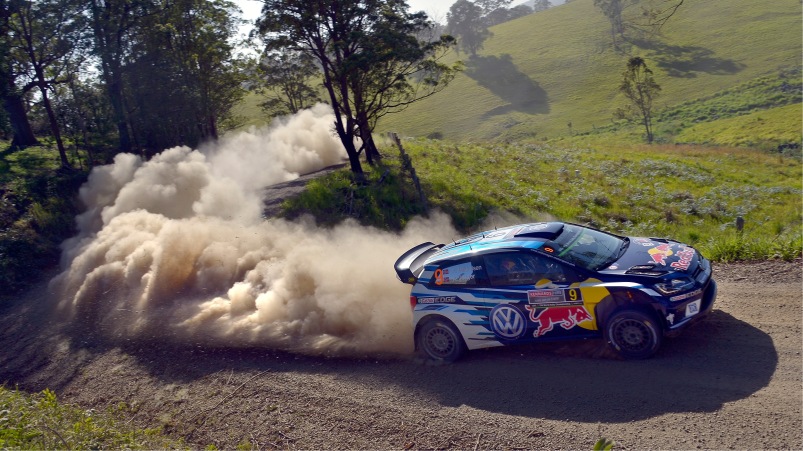 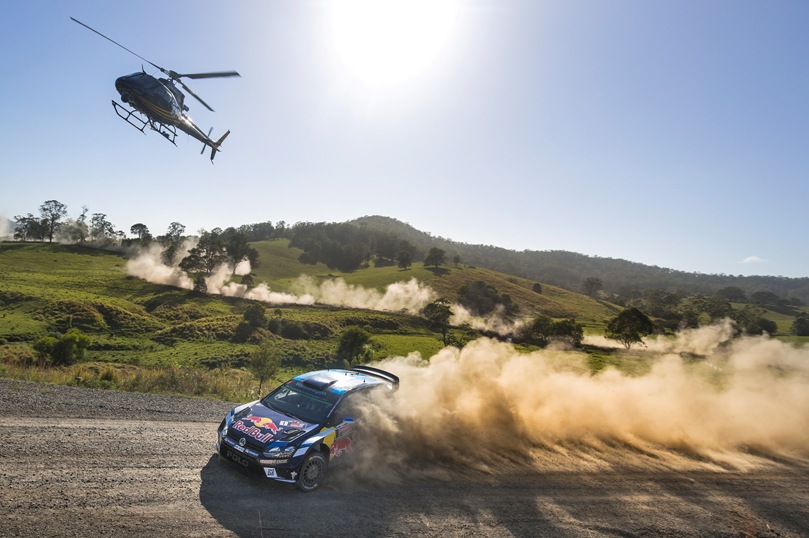 Magnificent effort at the Polo R WRC’s last hurrah: Andreas Mikkelsen/Anders Jæger (N/N) and Sébastien Ogier/Julien Ingrassia (F/F) are leading the way at the Rally Australia. Despite their roles as “road sweepers”, the Volkswagen duo dominated the opening day down under.

Mikkelsen/Jæger won five of the day’s eleven special stages and finished in the top three on every stage to open a lead of 15.4 seconds. Their Volkswagen team-mates and champions elect* Ogier/Ingrassia had the dubious honour of opening the route, but produced a performance worthy of world champions to win four special stages and end the day in a well-earned second place overall.

In contrast, Jari-Matti Latvala/Miikka Anttila (FIN/FIN) are to be denied a final highlight on their last works outing with Volkswagen in the FIA World Rally Championship (WRC). The duo drifted into the side of a bridge on the opening stage of the day and damaged the rear suspension on their Polo R WRC in the process. Trailing the leaders by over seven minutes after day one, the Finnish duo can no longer hope to play a role in the battle for victory and the podium.

* subject to confirmation from the FIA.

Quotes after day one of the Rally Australia

Sébastien Ogier, Volkswagen Polo R WRC #1
“A good start for us here in Australia. I am very happy with second place for Julien and me. The afternoon conditions were better than expected. I was flat out all day. After all, we have nothing to lose here. The heat is definitely a factor. If it is as hot as this tomorrow, it will be a very tiring 50 kilometres against the clock on ‘Nambucca’. The temperature will also play a role with the tyres. Whatever happens, I will try to stay ahead of Thierry Neuville, in order to help Andreas and Anders in the battle for second place in the Drivers’ and Co-Drivers’ Championship.”

Jari-Matti Latvala, Volkswagen Polo R WRC #2
“I don’t know how often I’ve been in this situation this year. No sooner had the rally got underway, than it was over for me again. I lost a bit of grip in a long right-hander just before a bridge on the opening stage, and caught the bridge with the rear-right tyre. It was not a big impact, but we suffered a damaged suspension as a result and had lost a lot of time by the midday service. This is obviously not how we wanted to say goodbye to the team on our final appearance for Volkswagen. We must now end the rally with dignity.”

Andreas Mikkelsen, Volkswagen Polo R WRC #9
“An absolutely perfect day for us – it doesn’t get much better than that. The Polo R WRC was better than ever in the morning. The set-up was ideal and fantastic to drive. The conditions out on the route changed in the afternoon, and we struggled a bit with oversteering and understeering at times. We expected to lose a lot of time on those behind us. To lead the rally and have won five stages on the way is absolutely perfect. If we want to clinch second place in the world championship, we are almost compelled to win – and that is exactly what we are trying to achieve here. Our goal has to be to have a good lead by Saturday evening, then we will have a good chance of crossing the finish line in front on Sunday. To achieve this, however, we still have a lot of hard work ahead of us.”

Sven Smeets, Volkswagen Motorsport Director
“Respect to Andreas Mikkelsen and Sébastien Ogier. Given their starting positions, they both produced absolutely outstanding performances today. The one-two is more than we expected. I am particularly pleased for Andreas, who is setting about his goal of finishing second in the championship with intelligence and consistency. Today we have put ourselves in a good position to end our WRC project with another success. The task now is to continue to work as meticulously and hard as ever to convert this position into a good result over the next two days of rallying. Unfortunately, there will be no happy ending for Jari-Matti Latvala, who hit a bridge and damaged his suspension. He was just really unlucky that this happened right at the start of the day.”

… thinking in three time zones. While Volkswagen has its sights set on a successful conclusion to its WRC programme in Australia, there are also titles up for grabs for the Wolfsburg-based car maker in Macau. The races in Macau are being followed closely by the team in Coffs Harbour on the east coast of Australia and those back at the Motorsport headquarters in Hannover. In the International TCR Series, Stefano Comini of Volkswagen customer team Leopard Racing could yet win the championship in the Golf GTI TCR at the infamous Macau street circuit. Comini is currently second in the championship. Volkswagen is also in with a chance of claiming its ninth victory as engine supplier in the FIA Formula 3 World Cup at the same venue. Australia is three hours ahead of Macau and ten ahead of Germany.

Provisional result after day one of the Rally Australia