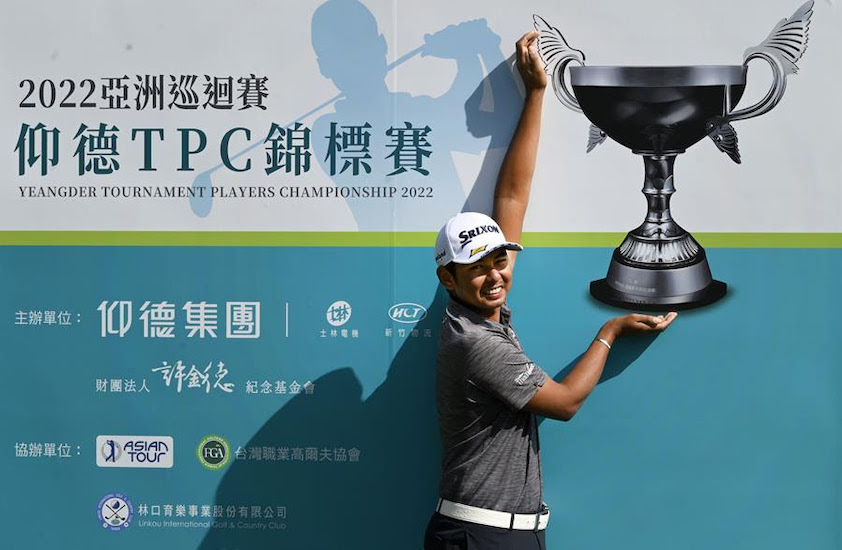 Thailand’s Nitithorn Thippong, one of the players of the year so far on the Asian Tour, will attempt to join an elite group of golfers who have won three Asian Tour titles in a single season this week when he competes in the US$700,000 Yeangder TPC, at Linkou International Golf and Country Club, in Taipei.

Having banked The DGC Open presented Mastercard in New Delhi in March for a much-celebrated first victory on Tour and the International Series Singapore in August the 25 year old has been a revelation and his growing fan base is excited to see what will happen next.

His breakthrough season has also seen him move into third place on the Asian Tour Order of Merit, and fourth on the International Series Order of Merit, and with a wealth of tournaments remaining there is no doubt that finishing 2022 number one is a real possibility.

However, any realisation of that is being tempered by a cautious approach.

“So, this week, I just try to focus on my game as much as I can.  I never thought about it until I’m in this position right now.”

American Sihwan Kim is the only other player to have enjoyed victory twice this year, having won the International Series Thailand, and Trust Golf Asian Mixed Stableford Challenge, also in Thailand.

This week is a landmark moment for the Asian Tour as it is returning to Chinese-Taipei for the first time in three years following the global pandemic.

Competitors from overseas had to quarantine for three days upon arrival, while this week’s event will adhere to bubble protocols with players required to stay within the limits of the hotel and golf club.

“Did nothing, just watching Netflix and play games and practice a little bit. But I don’t know, right now it’s still like a quarantine because we cannot go out anywhere right, just golf course and hotel. I saw the 7-Eleven in front of the hotel, it’s like you can go, but you cannot go you know what I mean? It’s boring a little bit but it’s okay. Just come out, play golf and then go back.”

Nitithorn, nicknamed ‘Fever’, first rose to prominence in 2018, when he claimed the PGM Penang Championship on the Asian Development Tour – where he has mainly played since turning professional in 2015, until a never to be forgotten 2022.

His compatriot Tirawat Kaewsiribandit is also competing this week. He narrowly missed out on a surprise victory in the Shinhan Donghae Open in Japan two weeks ago: he led at the halfway mark and after round three but despite recording an Albatross on the third hole during the final round he eventually finished in a tie for second place.

“I think the week in Japan is passed already, now I’m focused on this tournament to improve my ranking this year,” said Tirawat.

“Now my ranking is better and I’m more relaxed and more confident because I played well in Japan.

“Before coming here, I just relaxed and go to physio, because from Japan to Thailand it’s a long fight. I practised with my coach a little bit to check up on my swing again.”

Both Nitithorn and Tirawat will attempt to emulate Prom Meesawat and Thaworn by joining them as the only players from The Kingdom to win the Yeangder TPC.

Prom, who is also competing this week, lifted the trophy in 2014, while Thaworn was victorious in 2010 and 2013 – the two wins contributing to his record haul of 18 Asian Tour titles.