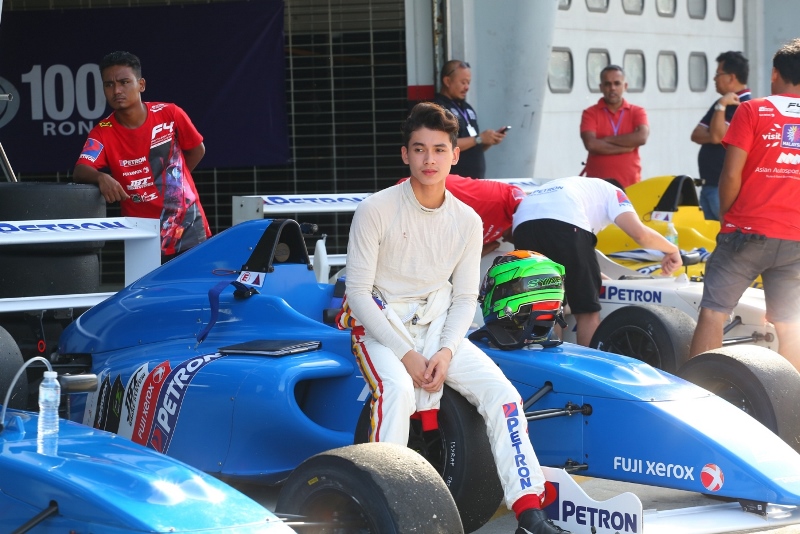 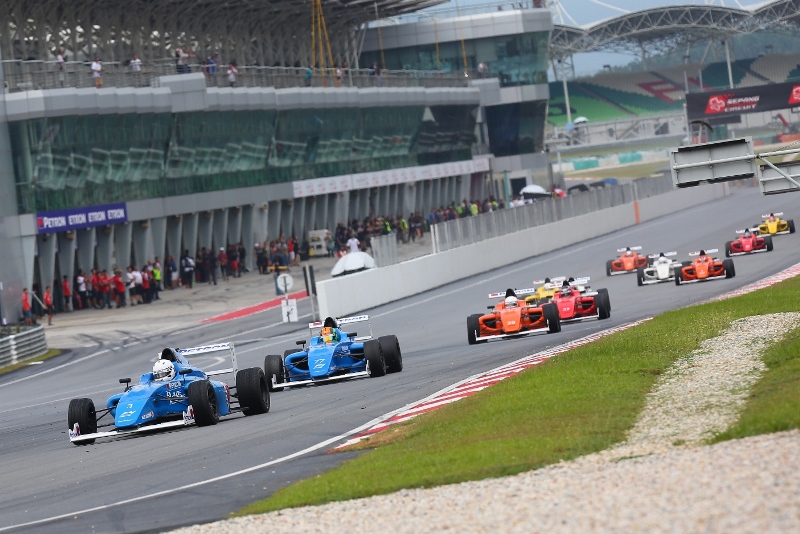 Malaysia’s Muizz Musyaffa stand a great chance to conclude the season on a high note as he starts tomorrow’s Race 4 on pole in Event 5 of the FIA Formula 4 Southeast Asia Championship fuelled by Petron at Sepang International Circuit here.

The 16 year-old Muizz qualified at the top of the grid based on his time of 2:13.534s, deemed as the second fastest lap in Friday’s Official Qualifying.

Muizz, regarded as one of the consistent drivers in the Malaysian camp, will need to be at his best if he harbours hope of making onto the podium which so far has been dominated by foreign drivers.

The Kuala Lumpur lad turned out to be Malaysia’s best finisher in Race 1, finishing 4th in yesterday’s 9-lap race.  In today’s Race 3 which ran under wet condition, Muizz finished 11th after a mistake in choosing the right tyre.

Despite being on pole, Muizz is wary of his chances, saying: “Yes, being on pole does give you an advantage but it’s no guarantee you’ll end up on podium. Many factors have to be taken into consideration including weather, track condition as well as tactics and choice of tyres.”

Muizz said that despite the immense pressure to perform well in front of the home fans, he is all ready to give his all to bring cheers to the Malaysian camp.

After two days of racing, Malaysia have yet to have any representative on the podium and the final three races, which starts off at 9.25am tomorrow, provide drivers with a great chance to make amends in season finale.

Apart from Muizz, all eyes will also be on other promising youngsters including Isyraff Danish as well as Nazim Ahmad, Timothy Yeo and Armand Johany to deliver the goods.

Isyraff will be Malaysia’s other best bet for podium finish as he has been quite consistent over the last two days after finishing 7th in Race 1, 4th in Race 2 and 6th in today’s Race 3. Isyraff missed the podium in Race 2, losing out the third place battle to France’s Alessandro Ghiretti with a time of 20:15.295s.

A mistake in choosing the right tyre cost Isyraff a favourable ending in Race 3 despite starting third on the grid. “The track was a bit wet due to rain earlier and we had chosen the dry tyre. As a result, I struggled with traction and that cost me a better position despite starting third,” said Isyraff.

Isyraff however is bent on making amends tomorrow and has set a target of finishing on the podium in tomorrow’s finale. “Hopefully, with the right strategy and luck…I’m hoping to end the season on a high note,” said Isyraff.

In today’s race, former Thailand’s Kane Shepherd put up another commanding drive to notch his second victory in Race 3 of Event 5. The former Thai karting champion stamped his authority on the track with a commanding drive from start to finish, ahead the other 11 contenders in the 9-lap race in a time of 22:05.610s.

Earlier in Race 2, Shephered, who also won yesterday’s opening race, could only placed himself fifth despite starting from second position, behind China’s Danial Cao who maintained his grip for the season’s overall title with a consistent performance in the first two days of racing. Cao, who started today’s Race 2 in pole position, now leads the Event 5 overall.

The event concludes tomorrow with another three exciting races (Race 4, Race 5, Race 6) which determine the overall winner of the season. The F4 SEA is a 5-event Championship held in Malaysia, Thailand and Philippines, with a 6-race weekend format. Just as in European and worldwide FIA F4 Championships, the Formula 4 SEA Champion wins 12 FIA Super Licence points.