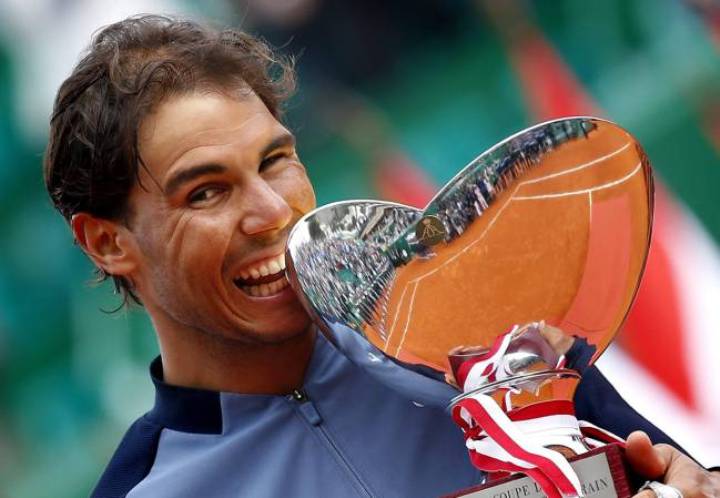 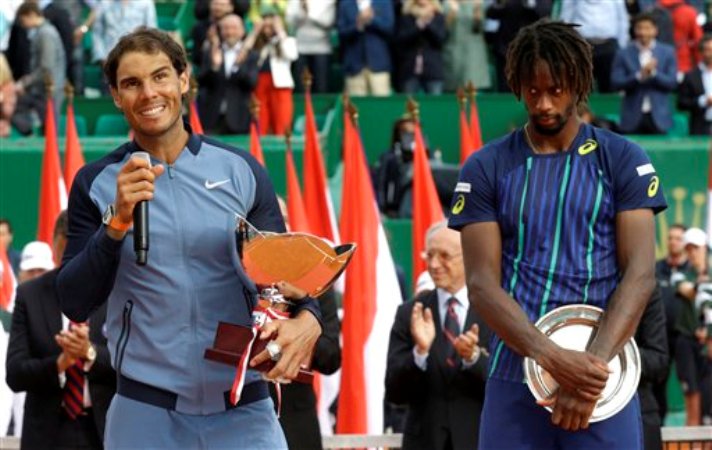 The Spaniard claimed his first trophy in the Principality since 2012 as he played in his 100th final and tenth in Monte Carlo.

The win pulled Nadal level with ATP leader Novak Djokovic on 28 trophies at the Masters 1000 level.

Winning a first Masters honour since Madrid in May, 2014, Nadal improved to 12-2 over Monfils

The pair were plagued by unforced errors in the tight contest, with the winner striking 36 while Monfils made more than 50.

The match was also riddled with 34 break points, with Nadal converting on eight of 21 while Monfils managed five of 13.

“I had a tough season last years. but I’ve had better preparation this year, even with a tough start to the season.

“I hope this week will help me a lot,” the Spaniard said as he prepared to move onto his home clay of Barcelona next week. “I’m very happy to win a tough match.

“The defence in the first two sets was just unbelievable. In the third I told myself I had had to hit my forehand harder. I went for winners, but at times it was tough to find the right feeling.

“This is a great victory for me and a very emotional one.

“It’s just amazing to win here again. This is an event I love so much, I’ve been struggling in the past and I came here and am able to play well.

“This victory means a lot to me. I hope it helps my season with confidence for the next few tournaments. I’ve been able to play well for two events in a row –

Indian Wells and here – and I’m very happy about that.”

Nadal now owns 68 titles and will carry on in the  run-up to the French Open with renewed confidence; Monfils can take small consolation after winning his first-ever set against Nadal on clay.

The opening set took almost an hour and a quarter and set the stage for the second, which at one point featured three consecutive breaks of serve out to 4-4.

Monfils moved into winning position with a break for 6-5 and kept the struggle alive as he won the set for one apiece.

“:I?’m feeling good. I’m not trying to assess the tournaments here and there. I just want to continue the work I’m doing, which is good work. I’m trying to improve my intensity in the tournaments match after match,” Monfils said.

“I try to play better and develop better tennis. I even try also to feel better. Today,it was a beautiful final. It was a high level of tennis,” said Monfils.

“In two weeks I’m hoping to be better. In three weeks, too, and be better for the French Open.”

But the third was all Nadal as the Spanish fifth seed swept to a love finish to win his eighth clay match against the Frenchman without a defeat.

Nadal improved his superlative tournament record to 58-4 after winning eight straight titles from 2005-2012. His last finals appearance here was in 2013 when he lost to Novak Djokovic.

Nadal’s specialist record on his favoured clay is all but untouchable, with the 14-time Grand Slam winner standing 48-8 in clay finals. – Agence France-Presse