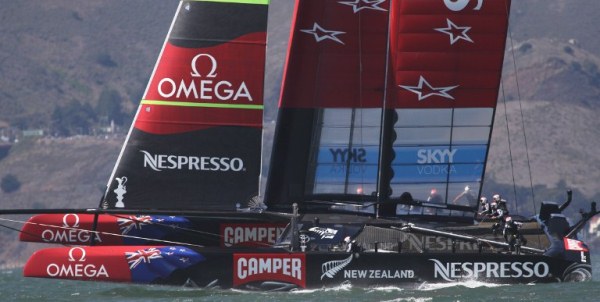 THREE of the most famous sports stars in the world – Rafael Nadal, Ronaldinho and Tiger Woods – are competing with America’s Cup yacht Oracle in what promises to be one of the most unusual contests ever for the Laureus World Comeback of the Year Award.

Oracle Team USA won the America’s Cup in September in one of the most amazing fightbacks in the history of sport. The US yacht, owned by technology billionaire Larry Ellison, was 8-1 down in the series in San Francisco Bay, just one point from defeat, but driven on by skipper Jimmy Spithill and guided by tactician Ben Ainslie, the four-time British Olympic gold medallist, they rallied to produce a phenomenal run of eight straight wins for a remarkable 9-8 victory over Emirates Team New Zealand.

The Laureus World Sports Awards, now celebrating its 15th year, is recognised as the premier honours event in the international sporting calendar. The names of the six Nominees for the Laureus World Comeback of the Year Award, as voted by the Laureus Media Selection Panel, will be announced this month and the winner unveiled at the Awards Ceremony in Kuala Lumpur on March 26.

To win this prestigious Award, Oracle will need to fight off the challenge of three of sports greatest legends, as well as many other strong contenders.

Spain’s Rafael Nadal returned after a seven month absence with a knee injury to produce one of his finest ever years. He won the French Open for a record eighth time, confirming his position as probably the greatest clay court player in history. He also won the US Open to take him to a career total of 13 Grand Slams, just four behind Roger Federer. He regained his No 1 world ranking and also won five ATP Masters 1000 tournaments.

Flamboyant Brazilian playmaker Ronaldinho, at 33, lead Atletico Mineiro to victory in the Copa Libertadores – the South American club championship – beating Paraguay’s Olimpia on penalties in the final. It was a remarkable performance by the two-time FIFA World Player of the Year, who had moved to relatively unfashionable Atletico Mineiro in June 2012.

Tiger Woods, after several years of underperformance as a result of injury and personal issues, came back to golf in style in 2013, regaining his world No 1 ranking and winning five events on the US PGA Tour. His second round 61 at the WGC-Bridgestone Invitational in August matched his record score on the PGA Tour and he was named PGA Player of the Year for the 11th time.

Other teams and individuals in the running for the Laureus World Comeback of the Year Award include Boston Red Sox, who beat the St Louis Cardinals 4-2 to win the World Series after a remarkable turnaround from 2012 when they lost 93 matches and finished last in the American League East.

San Antonio Spurs guard Tony Parker returned to basketball after a serious eye injury to enjoy a highly successful 2012-13 in which his team reached the NBA Finals, only losing in the final match of the best of seven to Miami Heat. He was also named Most Valuable Player of the tournament after France’s victory in the European Championships, where he averaged 19 points per game.

China’s Lin Dan, who was given a wild card entry to the World Championships as his ranking did not allow him to qualify, remarkably won a record fifth badminton world title beating arch rival Lee Chong Wei in the final.

Yelena Isinbayeva, the greatest female pole-vaulter of all time, won the gold medal at the World Championships in front of her native Russian crowd in Moscow, coming back from a disappointing performance in the Olympic Games in London when she only won a bronze medal.

American LaShawn Merritt, who also had a disappointing Olympic Games in London when he was not fully fit, He came back to win the World Championship gold medal in the men’s 400 metres by more than half a second, beating much vaunted Olympic champion Kirani James into seventh place.

And Brazil’s Robert Scheidt returned to sailing at the age of 40, nine years after winning the Olympic gold medal in Athens. He made an immediate impact, winning the 2013 Laser World Championship in Oman for the ninth time in his career.

The Laureus World Sports Awards recognise sporting achievement during the calendar year 2013. The names of the six Nominees for the Laureus World Comeback of the Year Award, as voted by the Laureus Media Selection Panel, comprising leading sports editors, sports writers, broadcasters and online journalists from around the world, will be announced on Feb 26, along with the names of Nominees from six other categories.