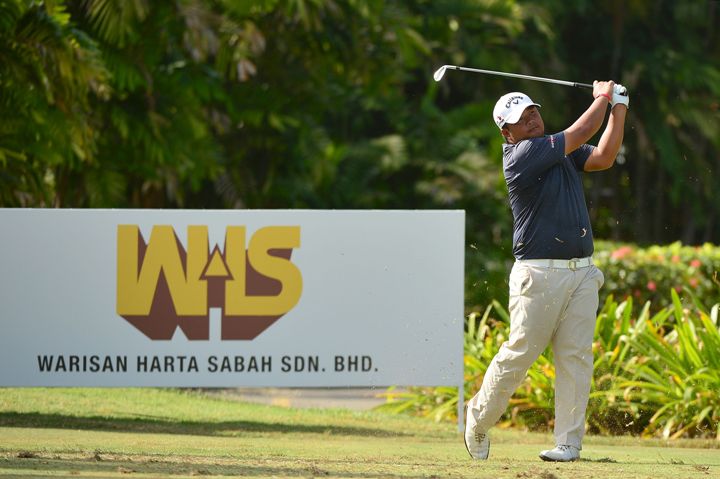 Namchok Tantipokhakul kept his lead at the US$100,000 Warisan Harta Sabah Masters on Friday as he continued his stride towards a first victory in over two years.

As temperatures soared at the Sutera Harbour Golf & Country, the Thai powerhouse dug deep into his reserves to return with an even-par 71 during the third round of the US$100,000 tournament, jointly sanctioned by the ASEAN PGA Tour and the Asian Development Tour (ADT).

Trading three birdies with a bogey and double bogey, the 28-year-old totalled seven-under 206 to maintain a two-shot cushion over countryman Nirun Sae-ueng (70).

Reigning Asian Development Tour Order of Merit champion Casey O’Toole from the United States notched a 70 of his own to stay five off the lead alongside local hope Kemarol Baharin and Thailand’s Piya Swangarunporn, who returned with matching even-par efforts.

Armed with a three-shot cushion at the start of the round, Namchok fired two birdies in three holes to push himself clear of the chasing pack. But a lapse of concentration saw him pull his drive into the water hazard on the fifth to concede a costly double bogey six.

He regained a birdie on the eighth and was on cruise control until he dropped another shot when he found the greenside bunker on the par-three 17th.

“Not the best of rounds but in these challenging conditions, I will take it. I felt very confident and got off to a great start. But I made a costly mistake on the fifth, which was the only low point of the round. I took a more conservative approach after that to steady my round. I gave myself an opportunity to birdie the last but I mis-read the line,” said the 2009 ASEAN PGA Order of Merit winner.

He added that he was under no pressure as he seeks to win for the first time since April 2013.

“Like I said on the first day, I’m putting zero pressure on myself. I feel comfortable in the lead and enjoy being in this position. Tomorrowthe goal is to avoid big errors and just make my chances count,” he noted.

Nirun, 20, who claimed his professional breakthrough in Sabah last year, mixed two birdies with a bogey to stay in contention.

“I hit some good irons shots today but the pins were a bit hard. I’m happy to be in contention again and hopefully, I can find some birdiestomorrow and put the pressure on Namchok,” he added.