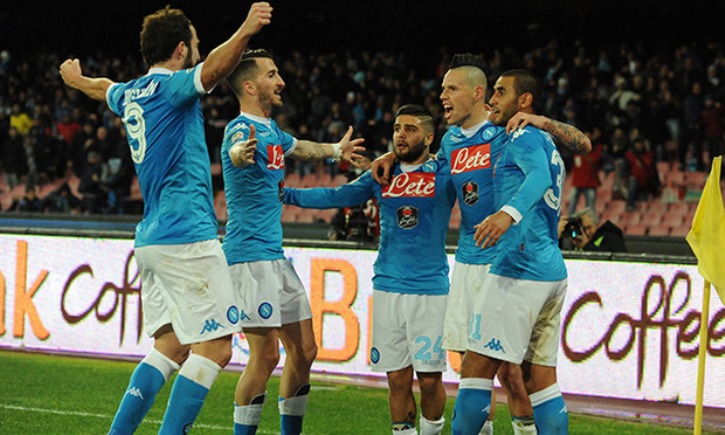 ‘Winter champion’ pizzas are on the menu and Naples’ favourite son, Diego Maradona, has promised to arrive by helicopter if Napoli fulfil their promise of winning the league title.

But for coach Maurizio Sarri, who has steered Napoli to top spot at the halfway point for the first time in 26 years, all talk of a first league crown since Maradona’s heyday at the San Paolo is premature.

“The importance I give to the title of ‘winter champions’ is the following: nothing. It’s a statistic, that’s all,” Sarri told media after his side’s 5-1 thrashing of Frosinone on Sunday.

Combined with the defeats of fellow title-chasers Fiorentina and Inter, who lost 3-1 and 1-0 to Lazio and Sassuolo respectively at the weekend, Napoli’s 12th win of the campaign left them top with a two-point lead on Inter and Juventus.

But with 19 games remaining and Juventus back in contention thanks to a ninth consecutive league win, away to Sampdoria on Sunday, the season is far from over.

In spite of Napoli’s progress, the shadow of Juventus looms large in a season in which Inter and Fiorentina are also in the title mix.

“There are teams who have a bigger track record than us. Who won the last four championships?” added Sarri, referring to Juventus.

“I’ve always said that Juventus were the big favourites, even when they had slumped to 12th place. I was the only one who was consistent in saying this.”

Yet that hasn’t stopped practically the entire city of Naples, former players and pundits predicting this could finally be Napoli’s chance to end their wait for a first league crown since 1990.

Pizza was invented in Naples, and local businesses are already cashing in.

‘Winter champion’ pizzas are on sale in some of the many pizzerias around the city, where reminders of Argentine football legend Maradona are omnipresent.

Murals, graffiti, t-shirts and flags are emblazoned with the former No 10’s effigy, meaning ‘Il Pibe d’Oro’ (the golden boy), like nearby Mount Vesuvius, is a constant reminder to the city.

When Maradona arrived in Naples in 1984, 75,000 people turned up at the club’s now decrepit San Paolo stadium to welcome the World Cup winner to the club.

If Maradona returns at the end of May, it will be for one reason: to celebrate the club winning their first title without his help, having steered Napoli to success in 1986 and 1990.

Maradona said Sunday: “Knowing that the city of Naples and my Neapolitan fans can enjoy such emotion makes me even more happy for them. Now I want us to win the league title.”

Later, he pledged: “If Napoli win the scudetto, I’ll fly to the city by helicopter to party with the fans.”

Maradona’s comments four months ago were not quite so complimentary.

He publicly embarrassed Sarri following an inauspicious start to the campaign as the tracksuit-wearing Italian coach initially struggled after replacing Rafael Benitez.

When Sarri inherited the team from Benitez, Napoli were spluttering along having finished fifth at 24 points behind Juventus last season when they missed out on the Champion League to Lazio.

With only two defeats all season, both away from home, Sarri has Napoli cruising along.

Frosinone coach Roberto Stellone said Sunday: “Napoli were just too strong for us. They will be right in the mix when it comes to fighting for the title.”

Recruited after impressing during a two-year spell with top flight side Empoli, the 57-year-old Sarri’s man-management skills and tactical nous has transformed Napoli into a tight and potent scoring machine.

Argentinian striker Gonzalo Higuain hit a brace on Sunday to take his tally to 18 from 19 games and Lorenzo Insigne, not even a regular starter, has scored eight, only three less than Higuain’s closest challenger Eder (Sampdoria).

“He helped me a lot early on and made me feel like I’m indispensible to the club,” Higuain told La Gazzetta dello Sport.

“At times for a player, dialogue can be the most important thing.”

Napoli have finished runner-up in Serie A a total of five times, the last time in 2013 when Walter Mazzarri’s side finished nine points behind Juve and Uruguayan Edinson Cavani finished the league’s top scorer on 29 goals. – Agence France-Presse