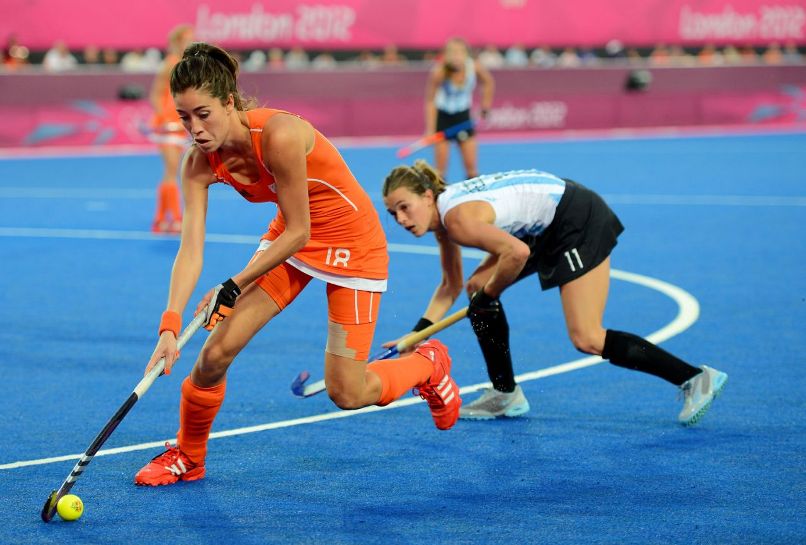 Following the completion of the pool phase, the Quarter-Final line-up for the women’s hockey competition at the Rio 2016 Olympic Games is now known.

As in the men’s Olympic hockey competition, the two highest ranked teams in the women’s game will meet in the Quarter-Final stage as Pool A winners the Netherlands face Argentina, who finished fourth in Pool B. The contest is a re-match of the London 2012 Olympic final, where the Netherlands took home the gold medal.
More recently, Las Leonas defeated Oranje in the final of the Hockey Champions Trophy 2016, ensuring that the outcome will be difficult to predict.
Pool B winners Great Britain will take on Pool A’s fourth-place finisher Spain in the last eight, while USA, who finished second in Pool B, face a meeting with a Germany team that finished third in the Pool A standings.
The Quarter-Finals will also feature an Oceania derby match, with Pool A runners-up New Zealand going head to head with Pool B’s third placed team Australia.
The Quarter-Final matches will all take place on Monday 15th August, with New Zealand playing Australia at 10:00 Brasilia Time (GMT / UTC -3) before USA and Germany take to the field at 12:30. The Great Britain versus Spain match will start at 18:00, with Netherlands taking on Argentina at 20:30.
All twelve teams were in action on the final day of pool play at the Deodoro Hockey Centre. In Pool A, reigning Olympic and World champions the Netherlands (FIH Hero World Ranking: 1) claimed their fourth win in five matches by defeating Germany (WR: 9) 2-0. Open play efforts from Xan de Waard and Kitty van Male did the damage as Oranje ended Pool A at the top of the standings having claimed 13 of the 15 points available.
The result left Die Danas third in the standings, but they would not know their final placement until the end of the day.
Spain (WR: 14) started their match against Korea (WR: 8) knowing that a victory would move them temporarily into the fourth Quarter-Final qualification position and would increase the pressure on China (WR: 6), who would then need to get at least a draw against in-form New Zealand (WR: 4) in the final Pool A match.
A goal from Cheon Eunbi gave Korea a 1-0 lead against Spain at half time, but the Red Sticks hit back with three unanswered goals from Begoña Garcia, Lola Riera and Gloria Comerma to establish what proved to be an unassailable lead. Despite Kim Bomi’s late penalty corner goal, the Spanish held on for a crucial 3-2 win to keep themselves in the hunt for a place in the last eight.
The pressure proved to be too much for China, who fell to a 3-0 defeat against New Zealand and ended up outside the crucial top four positions in the pool. Olivia Merry, Gemma Flynn and Anita McLaren were on target for the Black Sticks, who finished second in the Pool A standings.
In Pool B, Argentina knew that they needed a result against India in order to keep alive their Olympic dream, and did just that with a top class performance to win 5-0. All five goals came in the second quarter, with Martina Cavallero scoring twice alongside strikes from Maria Granatto, Carla Rebecchi and Agustina Albertarrio.
While defeat for India ended their hopes of Olympic glory, it was a welcome return to form for the 2016 Champions Trophy winners after losing three of their previous four matches.
Although the win sealed qualification, Argentina’s final position in Pool B would not be confirmed until the very last match of the day when Australia (WR: 3) took on Japan (WR: 10). Ahead of that encounter was the crucial contest between Great Britain (WR: 7) and USA (WR: 5) to decide who would take that all important first place finish and set up a match against the fourth-placed finisher from Pool A.
A third quarter strike from Michelle Vitesse put the Pan American champions into the driving seat, but Great Britain turned the result in their favour thanks to goals from Sophie Bray and Alex Danson to earn a 2-1 win and force USA into a second place finish in Pool B.
The result of the final match in Pool B was significant, with Australia needing at least point against Japan in order to secure a third place finish in the pool and force Argentina into fourth place. Goals from Mariah Williams and Emily Smith gave the Hockeyroos a 2-0 victory over the Cherry Blossoms, meaning that they had avoided a meeting with Pool A winners the Netherlands, with Argentina now having to face the team that beat them to the gold medal at the London 2012 Olympic Games.
Complete information about the hockey competitions at the Rio 2016 Olympic Games can be found on the official website: rio2016.com/en/hockey
The Olympic hockey events take place from 6-19 August at Rio’s purpose-built Deodoro Olympic Park, and will feature the 12 men’s and 12 women’s international teams that qualified through the Hockey World League and Continental Championships.
Tickets for both events are still available and can be purchased here
Rio 2016 Olympic Games Hockey (women) – Day 8