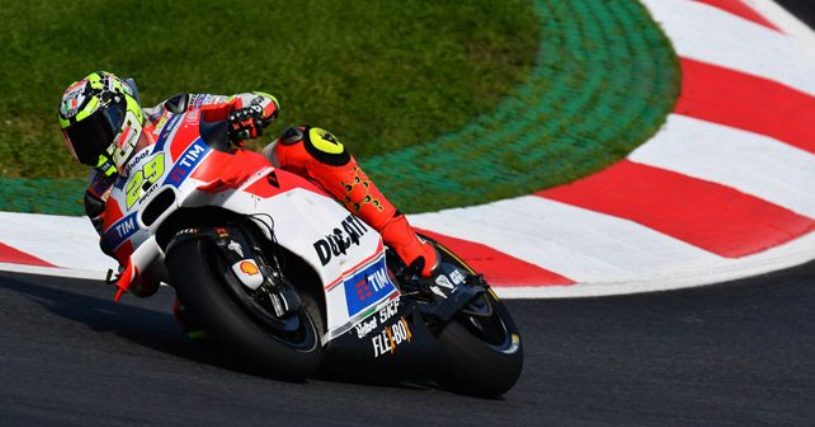 Italian Iannone came out on top in a thrilling duel with compatriot Valentino Rossi to claim pole for only the second time in his MotoGP career.

He posted a fastest lap of one minute and 23.142 seconds on the Red Bull Ring circuit, with nine-time world champion Rossi just over a tenth of a second down.

Honda’s Marquez leads the riders’ standings by 48 points after winning last time out in Germany, but there were concerns surrounding the 23-year-old when he crashed heavily at turn three during third practice while trying to avoid team-mate Dani Pedrosa.

The four-time world champion was given the all-clear to race after a quick trip to hospital despite dislocating his shoulder, and took advantage by securing a place on the second row.

“I braked too late and went wide at turn 3, risking a clash with Dani who was in front on the outside line,” Marquez said of the crash.

“I decided, along with the doctor, to go to the hospital to check that everything was okay.

“Luckily it was just a scare, and I was able to ride in the afternoon despite being bruised up. In the end, I think fifth place is good.”

Rossi, 37, is currently third in the standings behind the Spanish pair of Marquez and Jorge Lorenzo, but will have an excellent chance to claim his third victory of the season from second on the grid on Sunday.

Defending champion Lorenzo was 0.219 seconds slower than Iannone and had to settle for fourth.

“I thought I could be on the first row or even in first position, but finally in the last moment they overtook me,” said Lorenzo.

“Still, second row is a good place, better than we expected before starting the Grand Prix.” – Agence France-Presse