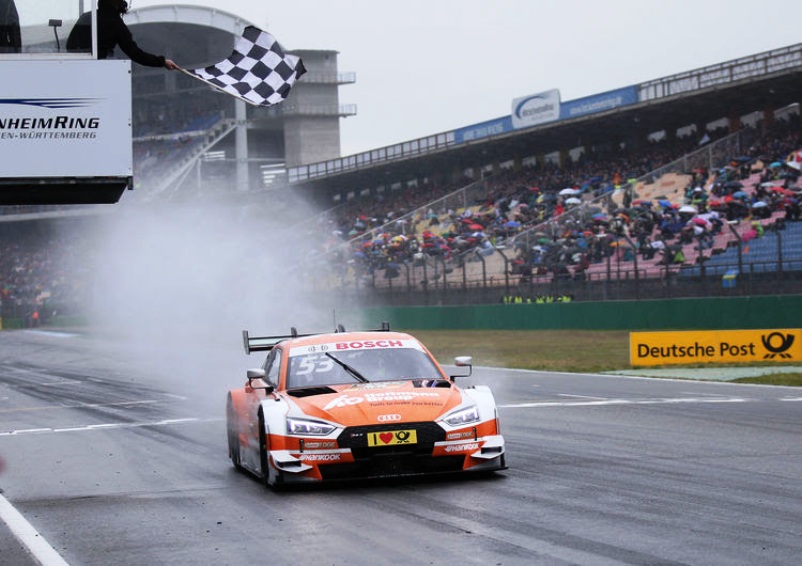 After just two races, the new Audi RS 5 DTM is already a winning car: in the turbulent round two of the 2017 DTM at the Hockenheimring, Jamie Green was in a class of his own on Sunday.

Following an early safety car period, the Briton from Audi Sport Team Rosberg took the lead on lap three and went on to extend it to more than ten seconds. When rain set in halfway through the race and kept getting heavier, Green switched from slicks to rain tires at the right moment.

His advantage was so great that he was even able to cope with a 5-second pit stop penalty. Subsequently, on a wet track, Green managed his clear lead well, crossing the finish line as the winner with a near-five-second advantage over his compatriot Gary Paffett in a Mercedes-Benz.

“The conditions today were really anything but easy,” Green said after his 14th triumph in the DTM. “Achieving a victory on the first weekend of a new racing season is always good. My thanks go to Team Rosberg and to everyone at Audi Sport: this success is an initial reward for the hard work in winter.” Head of Audi Motorsport Dieter Gass was impressed by the Briton’s performance as well: “Today, it was difficult to judge when to change to rain tires. The driver is now completely on his own in the DTM. Jamie (Green) handled this superbly and truly deserves this victory. It was a fantastic result for us.”

Like the day before, drivers of all three Audi Sport teams scored points on Sunday. Nico Müller from Audi Sport Team Abt Sportsline was the second-best Audi campaigner even though the Swiss was pushed into his brand colleague Loïc Duval by Mercedes-Benz driver Robert Wickens at the start and suffered a puncture in the incident. From the last position, Müller recovered to fifth place in his damaged car.

Mike Rockenfeller from Audi Sport Team Phoenix secured position seven even though the German, following an early first pit stop, had to pit a second time for a tire change due to the rain.

For Mattias Ekström, Sunday’s race was disappointing. Following his victory in the FIA World Rallycross Championship in the morning, the Swede advanced from position ten on the grid to third place. However, after switching to rain tires, the Swede dropped to eleventh place and, as a result, scored no points.

After delivering a solid qualifying performance, newcomer Loïc Duval had to park his Audi RS 5 DTM after only seven laps due to a starting collision in which he was not at fault. For René Rast, the race was even more unfortunate. The German started from the front row for the first time, but following the restart on lap three was hit so hard by a rival that he was forced to retire in the pits. Because Rast complained about neck pain he was taken to a hospital for a precautionary medical check.