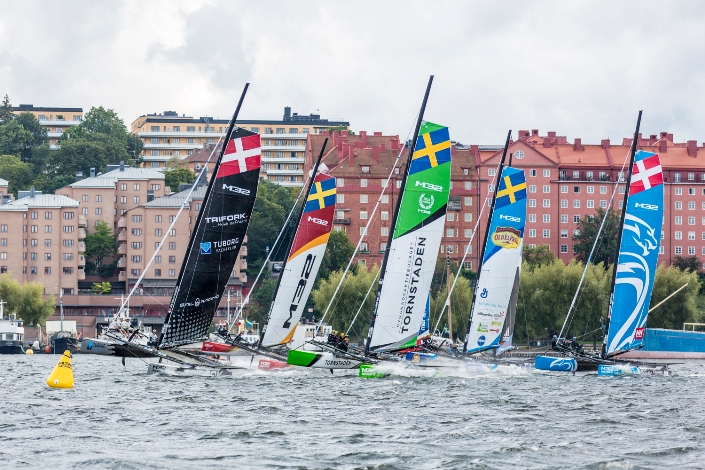 The World Match Racing Tour have announced a series of qualifying events for the 2016 world championship Tour, providing a new pathway for young aspiring sailors to compete against the best match racing teams in the world.

The series of qualifying regattas, called ‘World Tour’ events, will provide the opportunity for ambitious teams to earn invitations to the World Championship level events with USD 200,000 prize money per event. The first World Championship event takes place this March in Fremantle, Australia, and the short Tour season culminates with Marstrand, Sweden in July, when the winner of the World Championship will take home a bonus of US$1 million.

For each of the four Championship events leading up to the finals in Marstrand, there are two World Tour qualifying events where the first three teams will go through to compete in its related Championship event. If a new team puts together a committed campaign, practices hard in the new M32 catamaran and does well, those sailors could make it through to the final 20 teams who will be fighting it out in the World Finals in Marstrand. It is an unprecedented opportunity for young and ambitious sailors to make their mark on the professional racing world. Their entry into the Tour could be the launchpad to a long and successful career in sailing.

Up to eight teams will be able to compete at each World Tour event, competing in four brand new supplied M32 catamarans. First, however, the new teams need to go complete a three-day licensing course to familiarise themselves with how to handle the M32.

With the racing taking place on short close-to-shore courses at speeds of up to 30 knots, it is vital that all competing teams have attained a minimum level of competence and boat handling skills. The match racing license costs US$1,000 per crew member, but once you have acquired the licence, then you are ready to go M32 racing, taking part on a grand prix circuit at a very affordable price in fast and easy to handle boats.

Reigning World Champion Ian Williams welcomed the opportunity for young sailors to compete with the best in the world. It took Williams several years after his first match racing event before he managed to secure an invite to a Tour event. Now there is an opportunity of a much quicker apprenticeship for budding teams.

“If they’re good enough to be there, they deserve the opportunity. If we’d have turned up to the World Championship when we started match racing in 1996, or even in 2005 when we got our first Tour invite, we’d have got smashed. But I think the opportunity of this new format is the opportunity to learn from the best. Until we started sailing against people like Russell Coutts, Ed Baird and Peter Gilmour, we didn’t understand the level that we needed to achieve. Getting the opportunity to sail against the top guys will improve your game a lot quicker” said Williams.

The season is coming up quickly, with the first World Tour event taking place in the first week of February, the Warren Jones Youth Regatta in Perth, Australia. While this regatta, and the Ficker Cup in California, takes place in keelboats, all other World Tour events will be contested on M32s.

Below is the calendar of events. To register your interest and apply for an entry to a World Tour event, please contact World Match Racing Tour Racing Director Craig Mitchell at invites@wmrt.com