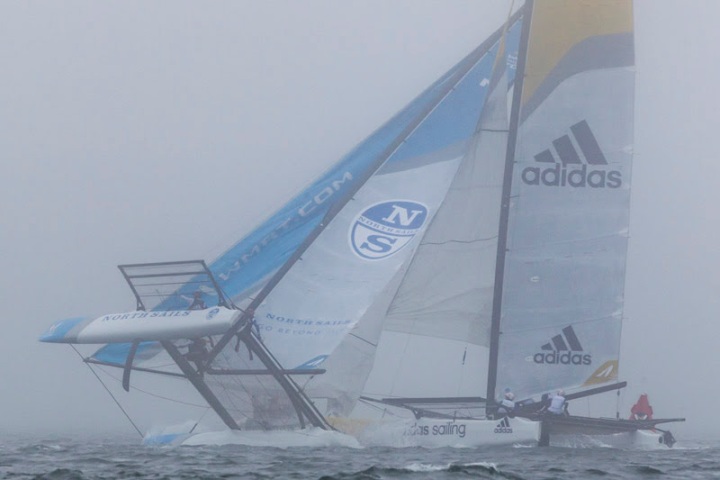 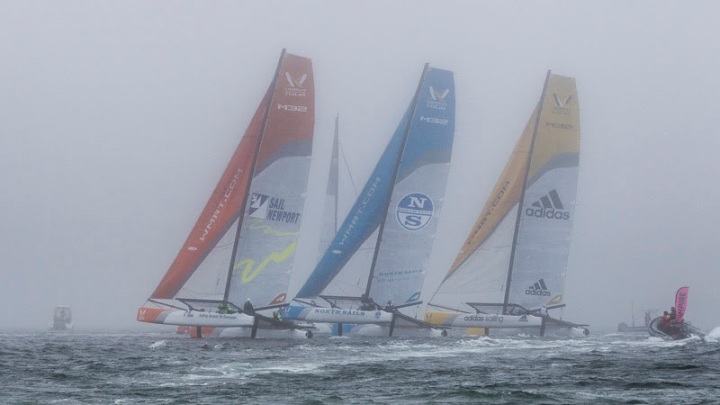 In yacht racing, sailors are often at the mercy of the wind and occasionally too much of it or too little. However on the opening day of the World Match Racing Tour’s Newport stage, crews faced a fog so thick that at times it was hard to see the bows of their M32 catamarans, let alone marks of the course.

As the banks of fog rolled through Newport Harbour and the wind fluctuating from six to 16 knots, the race officials on the course off Fort Adams, had to shoehorn in racing as and when they could.

As usual with the modern-day WMRT race format, the first two days of this event are Qualifying fleet races to determine day three’s ‘Super 16’. Five high performance M32 catamarans are being used, so the 20-strong line-up has been divided into four groups and through patience the race committee was able complete all but two races of today’s full schedule.

Stand-out performers of the day were New Zealand’s Chris Steele and his 36 Below Racing crew in Group1, Sally Barkow’s Team Magenta 32 in Group 2 and the Yann Guichard-skippered Spindrift racing crew from France in Group 4, none of whom finished a race lower than second.

This was particularly good for M32 newcomer New Zealand’s Chris Steele: “I am really happy with the way the guys are sailing with the boat. It was pretty tricky out there and we didn’t come close to flipping it over. We just kept it clean.”

Steele attributed their result today to having come into this regatta fresh from last week’s qualification event. “That was massive in our preparation for this event. While we aren’t anywhere near some of the other top teams, coming off three days of racing is what helped this morning,” concluded Steele.

While fog is normally associated with light or no wind, in New England you can get fog AND wind.
Executive Director of Sail Newport, Brad Read explained today’s pea soup conditions: “Generally this is the worst time of the year for fog because the ocean is so cold. But today’s fog was also caused by all the moisture from the tropical system that went into the Carolinas and is why it is so humid at the moment.”

The lack of visibility created some unique problems on the race course. “Today you couldn’t even see the reach mark,” said Swede Stefan Rahm, who’s boat capsized during the third race of Group 1. “You can get a bit disorientated when you don’t see the marks, but it is not a big problem. The worst part was that you couldn’t see the boundaries. It was really hard to see where you had to tack.”

During the first group’s racing, the M32s were sailing under full mainsails in wind gusting to 16 knots. In this even the normally immaculate Taylor Canfield and his US One team got caught out and flipped their M32.

Coming out on top in Group 3 was GAC Pindar skipper Ian Williams, but he ended the day only a point ahead of American Michael Menninger’s 13Fifty Racing after taking not one, but two, course marks for a trawl during his group’s final race.

Proving that the World Match Racing Tour Newport could be the occasion that the girl-power of Team Magenta prevails, American skipper Sally Barkow is ahead in Group 2. “We are just trying to keep improving and these conditions are favourable for us.”

Barkow is perhaps more used to racing in Newport and New England than many other crews here and noted that it was difficult to sail their M32 as they would normally, with the water and gust patterns obscured in the fog. “It is tricky because we normally change modes on the boat with every knot change of pressure.”

Sadly while on the water almost a full day of racing was completed, the Memorial Day holiday in Newport suffered both from occasional rain as well as the fog. However according to Brad Read, conditions are set to perk up tomorrow. “This morning the forecasters were saying that it is going to be sunny for the next three or four days.”