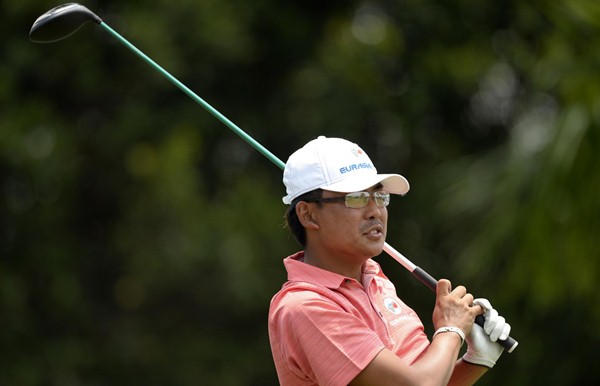 NICHOLAS FUNG and Kim Hyung Sung plan to take the bull by the horns after being drawn with two of Team Europe’s strongest players, Graeme McDowell and Jamie Donaldson, for the opening day’s fourball at the EurAsia Cup presented by DRB-HICOM starting tomorrow.

Malaysian ace Nicholas, a captain’s pick, is relishing the challenge of taking on Major champion McDowell and Donaldson, who are ranked 14th and 28th in the world respectively, in the final fourball match of the day at the Glenmarie Golf and Country Club’s Garden course.

“I’m so happy that I’m playing against Graeme McDowell. I was hoping to play with him during one of the days and now I’ve achieved that dream, I hope I can do better and win the match for my team,” said the 23-year-old Nicholas.

Nicholas, winner of the 2013 Asian Development Tour Order of Merit, intends to repay captain Thongchai Jaidee’s faith in him.

“Thongchai believes in us and he wants us to play our own games. He is very confident we can beat Team Europe. He has asked us to go out to have fun. He does not want us to be stressed out, but maintain a more relaxed mood by playing pool and ping pong in the team room!” said Nicholas.

“We know each other very well. The team’s mood is good. The atmosphere is great and the Japanese guys are really funny! Actually all of us have been joking around and having fun. This relax mood will definitely help us,” he added.

Nicholas hopes to draw on the home fans’ support.

“I have home advantage and the crowd will be following my group. I know Graeme and Jamie are good players but hopefully we can give them a good fight. I’m ready to go on the attack tomorrow.

“In this format, you need to get as many birdies as you can. I average about five or six birdies on this golf course so hopefully I can get more than that to win the match.”.