Home News No Curry, no problem as Warriors rout Rockets 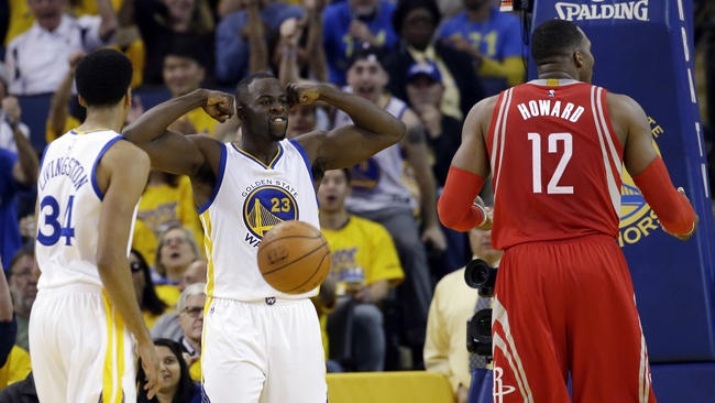 The Golden State Warriors brushed off the unsettling absence of injured star Stephen Curry on Wednesday to demolish the Houston Rockets and advance to the next round of the NBA playoffs.

The Warriors’ hopes of successfully defending their NBA crown received a blow on Sunday after Curry was sidelined for at least two weeks with a sprained knee ligament.

But the Warriors did enough in a 114-81 rout of the Rockets to remind the pretenders to their crown that they remain a formidable outfit even without their talisman.

The 4-1 series victory means the Warriors will now face either the Portland Trail Blazers or the injury-ravaged Los Angeles Clippers in the next round of the Western Conference playoffs.

Portland appear to be in pole position to face Golden State after defeating the Clippers 108-98 on Wednesday to take a 3-2 lead in the best-of-seven series.

Whether the Blazers will have enough to trouble the Warriors, even without Curry, remains to be seen.

Golden State coach Steve Kerr, who received his NBA Coach of the Year award just before tip off at the Oracle Arena, hailed his team’s strength in depth after the win.

“Literally every single guy on our roster contributed during this series,” Kerr said.

That point was emphasized by the performance of Curry’s replacement, veteran Shaun Livingston, who finished with 16 points on Wednesday.

James Harden scored a game-high 35 points for the Rockets, but the result was never in doubt after the Warriors sprinted into a 37-20 lead in the first quarter that they never looked like losing.

While the Warriors overcame the absence of Curry smoothly, the Clippers were unable to paper over the gaping hole in their ranks left by the absence of injured stars Chris Paul and Blake Griffin.

The Clippers fought bravely to stay in touch heading into the fourth quarter at the Staples Center.

But as the game reached its critical phase, Portland stretched away to seal a deserved win which leaves them needing just one more victory to advance. Game Six takes place on Friday in Portland.

CJ McCollum finished with 27 points while Damian Lillard scored 16 of his 22 points in the fourth quarter.

Clippers coach Doc Rivers said his team had been running on empty when it mattered.

“Like they turned their energy up in the beginning of the third (quarter), and we were exhausted,” Rivers said.

“I had to call two timeouts. You could just see it. That’s not conditioning, that was emotion.”

Redick meanwhile insisted the Clippers would be ready to rise to the challenge when they hit the road to face Portland.

“I don’t want to equate a basketball game to death, but it is do or die,” Redick said afterwards.

Elsewhere Wednesday, the Charlotte Hornets stunned the Miami Heat 90-88 to take a 3-2 lead in the best-of-seven series.

Courtney Lee was the hero for Charlotte, sinking a game-winning three-pointer with just under 30 seconds left to leave the Hornets within one win of a place in the next round.

Charlotte will be at home for Friday’s Game Six, where victory would see them advance.

Lee set up his game-winning play after grabbing a crucial long rebound. He also conjured a key block on Dwyane Wade with 2.6 seconds left as the Hornets held on.