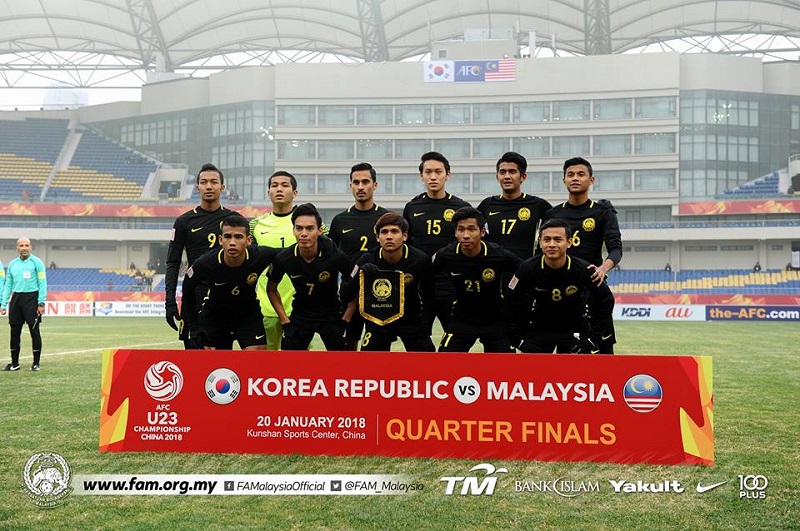 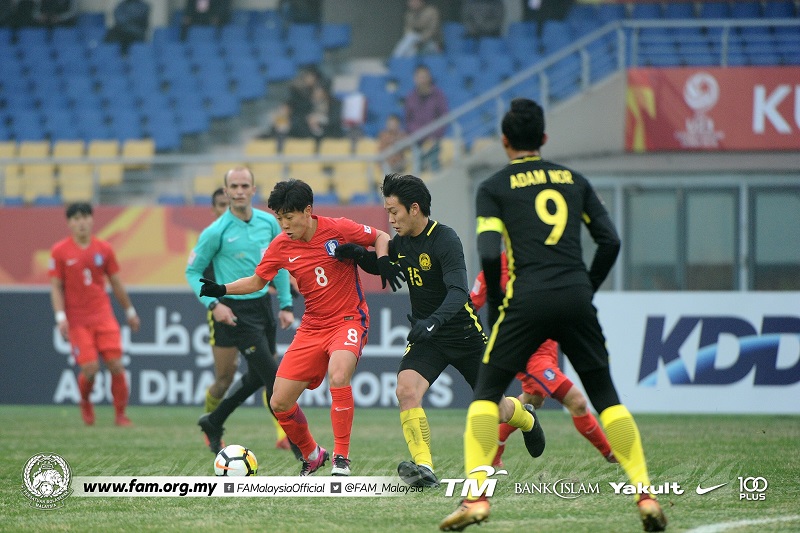 # Malaysia make Korea slog for their 2-1 win
Malaysia gave a committed and disciplined performance despite their 2-1 defeat to Asian giants South Korea in the AFC Under-23 Championships in the quarter-finals in Kunshan, China on Saturday.
Despite conceding a goal in less than 15 seconds the Malaysians were never going to give up against the 2016 runners-up to Japan. Instead, the Koreans, riding on their vast experience of playing at the higher level, scored a a lucky winner in the 85th minute through Han Seung-gyu from an assist by Lee Gun.
Malaysia refused to buckle against the mighty Koreans who were touted as the favourites. When Malaysia were one down in less than a minute from the whistle many thought Harimau Malaya were in for a beating.
Cho Jae-wan is credited with the fastest goal in the tournament when his left footed shot hit the left upright and spun into the goal past a stunned Malaysian keeper Haziq Nadzli. Korea 1-0 up.
Instead the Malaysians tightened up their game and matched the Koreans with tremendous fighting spirit. Often the Koreans were back peddling against the Malaysian onslaught.
The much awaited equaliser finally came through N. Thanabalan’s diving header on 67 minutes from a cross by Safawi Rasid. The goal left the Korean custodian Kang Hyeon-mu rooted and he could only through himself on the ground in frustration.
The came the killer blow five minutes before the end of normal time. The vastly experienced Koreans of having played at high level tournaments more than their opponents made it count with a little help from the hesitant Malaysian backline.
“There is no doubt the players played to their ability but it was still not good enough against an experienced a good side like Korea. This simply means we have to work harder to catch up with the big guns,” said coach Datuk Ong Kim Swee.
“It has been an achievement in many ways but we cannot afford to be too happy nor celebrate with what we achieved here. Let’s us learn from the mistakes we made and look to the brighter side of better things to come.”
Kim Swee highlighted that it was a “player’s mistake” which allowed Korea to score the quick goal for their opening goal.  BY RIZAL ABDULLAH