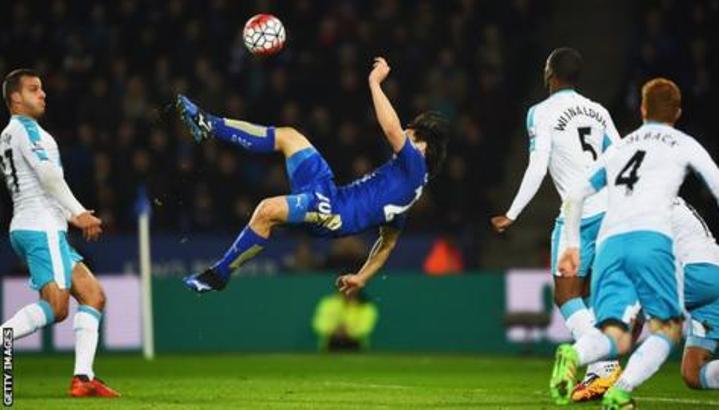 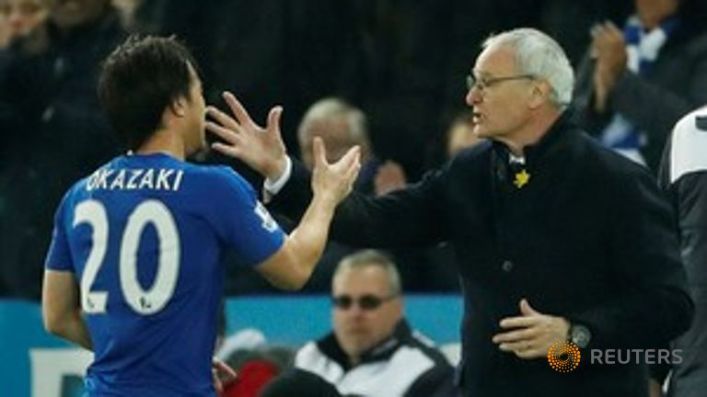 Benitez was taking charge of Newcastle for the first time since being appointed as the successor to the sacked Steve McClaren on a three-year contract, but it was Japan international Okazaki, 29, who stole the headlines with an acrobatic 25th-minute overhead kick.

Okazaki’s sixth goal of the season took Leicester five points clear of Tottenham Hotspur, who had trimmed their lead to two points with victory at Aston Villa on Sunday, and nudged Claudio Ranieri’s men a step closer to an extraordinary title triumph.

“It was not our best performance, but we showed great spirit,” said Ranieri, whose side require 20 points from their final eight matches to win the title.

“I feel now that I am just concentrating on the next game against Crystal Palace. We are so strong, we think only one game at a time. Step by step, that is our philosophy.”

It was Newcastle’s fourth consecutive defeat — a first this season — and saw Leicester complete a league double over the north-east giants for the first time since the 1974-75 campaign.

The visitors showed more fight than in recent weeks at the King Power Stadium, but they remain in the relegation zone ahead of Benitez’s St James’ Park baptism of fire on Sunday against local rivals and fellow strugglers Sunderland.

“I will take the positives,” said Benitez. “We did well. You could see the commitment and the passion.

“There were a lot of positives and the team showed that they are convinced they can win.”

Benitez made two changes to the team beaten 3-1 by Bournemouth in McClaren’s final game, with Vurnon Anita and Aleksandar Mitrovic coming in, while Jack Colback moved from central midfield to left-back.

Another novelty saw Moussa Sissoko line up on the left flank and the France international gave the hosts an early scare when he chased down Wes Morgan’s back-pass and forced Kasper Schmeichel into a hurried clearance.

It set the tone for an assured start by Newcastle, for whom lone striker Mitrovic proved an effective battering ram.

Ayoze Perez and Colback each shot wide from decent positions, Sissoko headed the wrong side of the post from Daryl Janmaat’s right-wing cross and Mitrovic played a cross-shot right across the face of goal.

But Leicester stirred, Riyad Mahrez seeing a shot blocked by Steven Taylor and Robert Huth nodding the resulting corner over the bar, and midway through the first half they made the breakthrough.

Mahrez’s free-kick from deep on the right was only cleared as far as Marc Albrighton, loitering on the left-hand edge of the box, and his cross was nodded back by Jamie Vardy for Okazaki to score with a picture-book overhead bicycle kick.

Moments later Albrighton almost made it two, jinking this way and then the other before bending a shot a foot wide of the right-hand upright.

Perez warmed Schmeichel’s gloves from range at the other end, but with Leicester keeping Newcastle at arm’s length, Benitez made a change early in the second half by sending on Andros Townsend for Anita.

The change saw Georginio Wijnaldum drop into central midfield and Newcastle were immediately enlivened, Janmaat forcing Albrighton into an alert block and Perez sending a shot into the side-netting.

Ranieri responded by introducing Jeff Schlupp for Okazaki, giving Leicester extra cover on the left against the tricky Townsend, while Albrighton switched flanks to the right and Mahrez moved inside.

Newcastle goalkeeper Rob Elliot almost gifted Vardy a goal when he dropped a long throw from Christian Fuchs, only to gather it at the second attempt.

But the butterflies were all in the stomachs of the home fans in the latter stages, Huth blocking from Sissoko and Newcastle substitute Siem de Jong miscuing from 15 yards, before the whistle drew a roar of relief. – Agence France-Presse