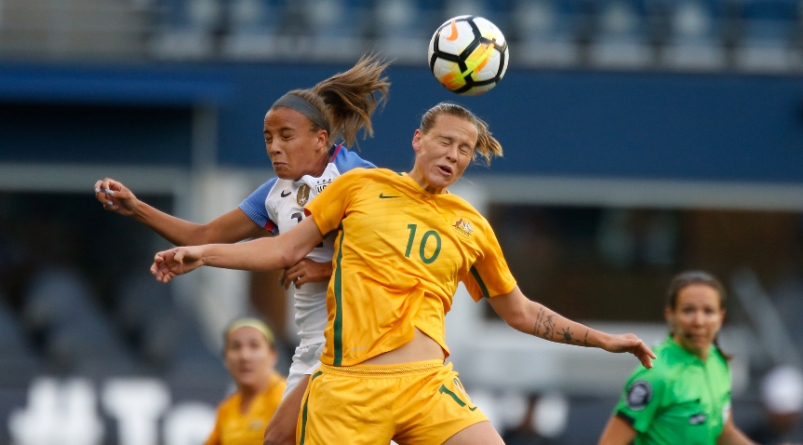 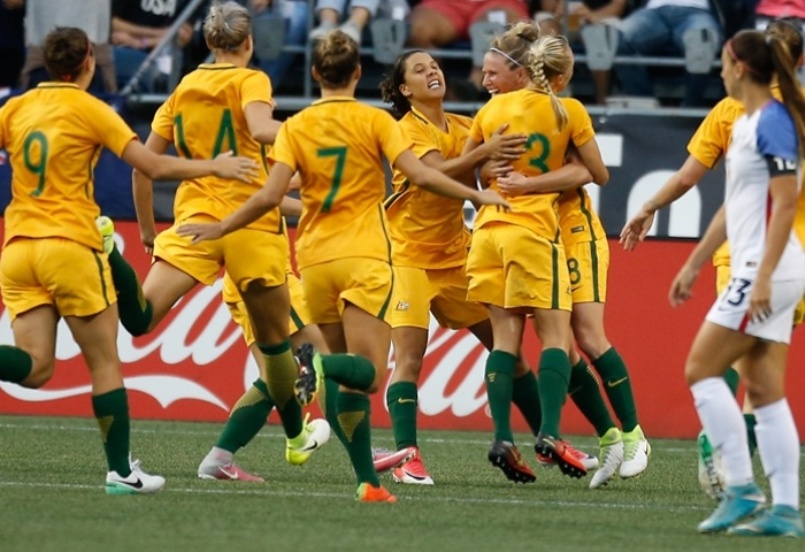 Australia produced a superb performance to secure a first ever victory against three-time World Champions the United States, while Japan were forced to settle for a 1-1 draw against Brazil on the opening day of the Tournament of Nations.

The Matildas produced an outstanding performance to end a 30-year hoodoo, and inflict a shock defeat on the FIFA Women’s World Cup holders and World No. 1 United States in the opening match of the Tournament of Nations in Seattle.

The 1-0 victory – courtesy of a 67th minute goal by Norway-based attacking midfielder Tameka Butt – is the first by Australia in 27 attempts against the Americans, dating back to their first meeting in 1987.

The US started as hot favourites on home soil, but it was a richly experienced Australian side who took the field, with 17-year-old defender Ellie Carpenter the only member of Alen Stajcic’s starting 11 to have less than fifty caps to her name.

Despite their familiarity with the world stage, the Matildas started somewhat nervously, allowing the Americans to control early possession, and it took a smart Lydia Williams save to deny Megan Rapinoe after 11 minutes.

But Alen Stajcic’s side settled into the contest, and, with 2014 AFC Women’s Player of the Year Katrina Gorry dictating terms in the centre of midfield, they finished the stronger of the two teams in what was an opening half of few clear cut chances.

US coach Jill Ellis introduced stars Carli Lloyd and Alex Morgan shortly after the hour mark, but just four minutes later, Australia’s Butt pounced on confusion in the American defence to sweep the Matildas into a deserved lead.

The goal – Butt’s eighth at international level but first in two years – put Australia in the driver’s seat, but elicited a sharp response from the hosts, and the ever-reliable Williams was forced to react quickly to deny a sweet strike from two-time FIFA World Player of the Year Carli Llloyd.

The US created more chances as the match neared its conclusion, but the Matidas defence held firm to secure a history-making win, and open Australia’s Tournament of Nations campaign in the brightest way possible.

Japan were minutes away from securing an impressive first-up victory, but were denied by a stunning late equaliser from Brazil’s Camila.

The second-half substitute’s superbly taken, 25-yard strike put the South Americans back on level terms with just four minutes remaining, after another substitute – Japan’s Yuka Momiki – had earlier given the Asian champions the lead.

Asako Takakura’s starting 11 featured a mix of youth and experience – with three of her selected back four combining for a total of six previous international appearances – but it was Brazil who looked more dangerous in the first half, spurning a number of scoring chances.

Nadeshiko forward Mina Tanaka (pictured above) had a gilt-edged chance of her own just before half-time, only to be denied by Brazilian goalkeeper Barbara, but her NTV Beleza teammate Yuka Momiki gave Japan the lead in the 63rd minute.

Latching onto a pinpoint cross from Emi Nakajima, the 21-year-old substitute powered home a header from eight yards to put Japan on the verge of victory.

But Orlando Pride’s Camila would have the final say, hammering home a memorable long-range effort in the game’s final moments to notch her first international goal, and salvage a point for Emily Lima’s side.