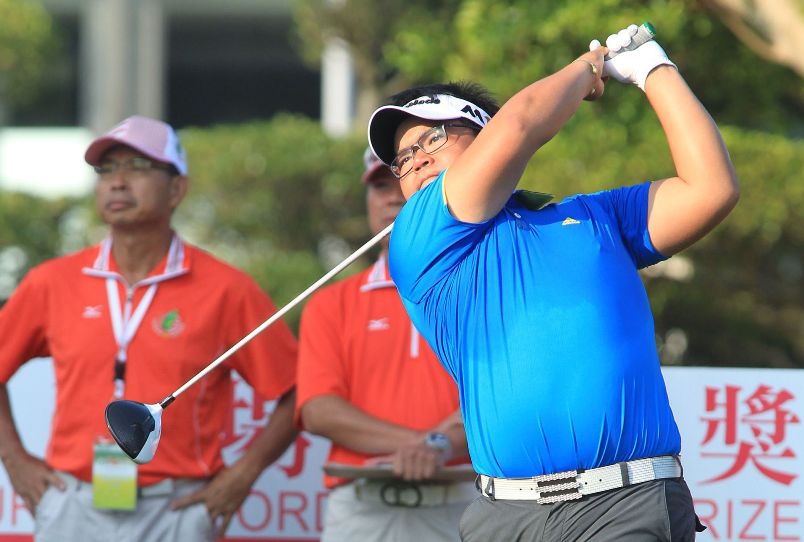 Thailand’s Panuphol Pittayarat was rewarded for his patience when he fired a two-under-par 70 to lead by two shots at the halfway stage of the Mercuries Taiwan Masters on Friday.

The 23-year-old traded four birdies against two bogeys to take charge on six-under-par 138 and put himself in prime position to challenge for a first Asian Tour title at the Taiwan Golf and Country Club.

Local star Lin Wen-tang, who won the event in 2009, Filipino Miguel Tabuena and Danthai Boonma of Thailand posted 68, 70 and 67 respectively to share second place on 140 at the US$800,000 Asian Tour event which is celebrating its 30th edition.

The tricky conditions at Taiwan GCC made life difficult for most players but Panuphol kept a cool head and was rewarded with four birdies against two bogeys to stay ahead of the chasing pack.

“A couple of under on this golf course is very acceptable. The key today was staying patient. A lot of things didn’t go my way and my ball kept bouncing away from the hole. It always turned away from the hole but I stayed patient and kept grinding,” said Panuphol.

“You come out to this golf course with a tough layout and tree line, you have to be patient. You won’t hole most of the putts you expect to hole. Eventually the putts will drop!” added the Thai, who is nicknamed Coconut.

Lin, a five-time Asian Tour winner, kept up his chase for a second victory at the Mercuries Taiwan Masters after shooting five birdies against one bogey.

“It was a good day but it could be better. I missed a few putts out there but overall it was okay. Golf is a funny game, I missed the short putts and holed the long putts! It is only the second round so I won’t think about winning yet,” said Lin.

After fighting back from an opening bogey with seven birdies, Tabuena was disappointed to finish with a double bogey on 15 followed by two closing bogeys.

“I’m not happy with the way I finished. It was unlike me to finish like that. Making a double on a par five really hurts. I had a perfect drive and had 250 yards to the green. Unfortunately my second shot was way off from where I thought it should be. I chipped out and it got stuck in a tree root and I doubled from there.

“That got my head hot going into the next hole which shouldn’t happen because I’ve been a professional for six years. It was an amateur mistake by me,” said the 22-year-old Tabuena, who represented his country in the Olympics last month.

Danthai, who won his first Asian Tour title last year, was delighted to be in position heading into the weekend after struggling with poor form this year.

“In the beginning of the year, I was low on confidence. I wanted to be a better player (after winning) and I put too much pressure on myself. Now I change my mind set and I’m taking it easy,” said the 20-year-old.

The halfway cut was set on seven-over-par 151 with a total of 51 players qualifying for the weekend rounds.

Scores after round 2 of the Mercuries Taiwan Masters 2016 being played at the par 72, 6923 Yards Tamsui Course course (am – denotes amateur):