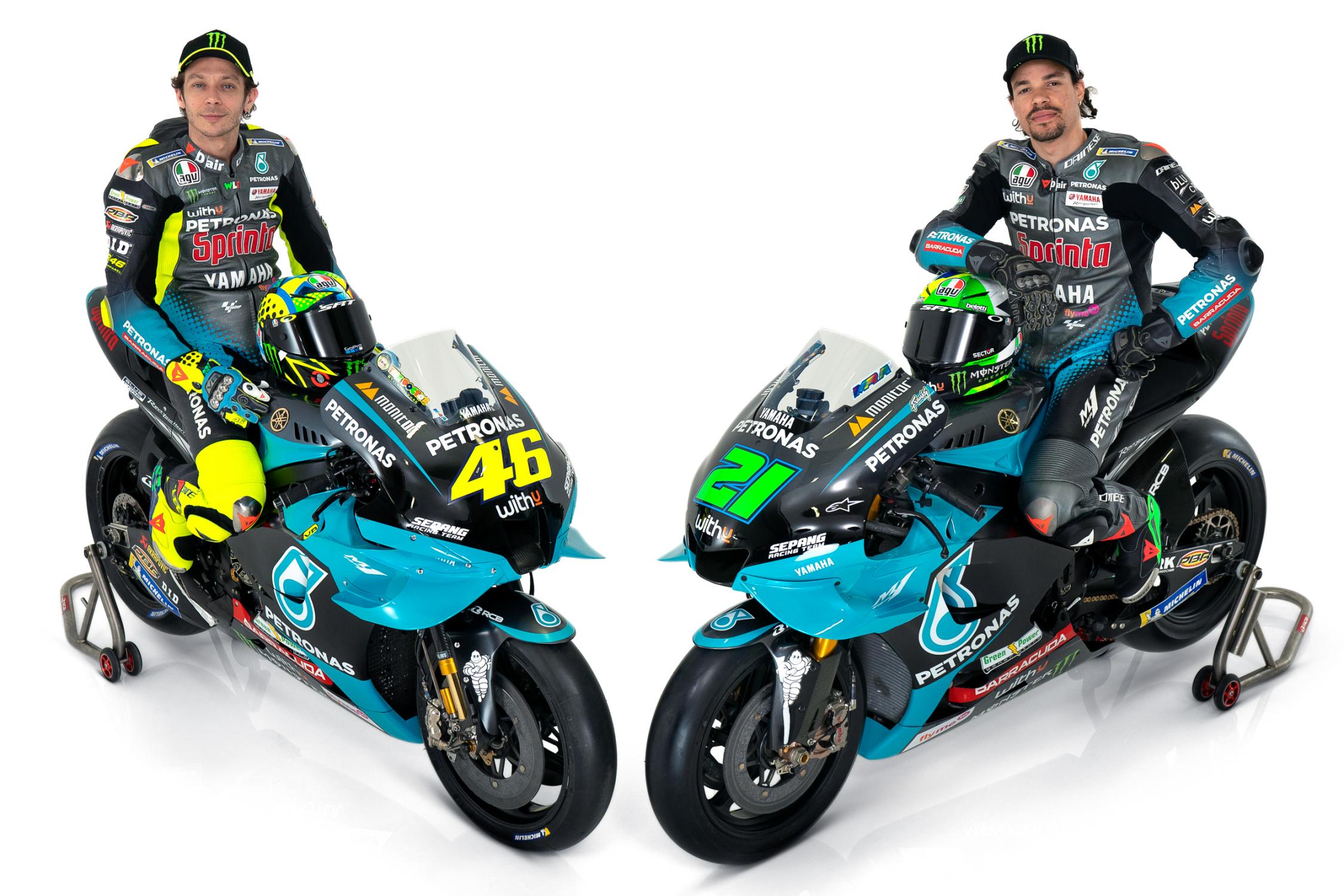 Franco Morbidelli and Valentino Rossi unveil the Petronas Yamaha SRT 2021 YZR-M1, plus their Moto2™ and Moto3™ riders launch their bikes

After a stellar second season in 2020, where the team and rider Franco Morbidelli finished the year as runner-up in their respective championships, PETRONAS Yamaha Sepang Racing Team is eager to continue its extraordinary story of success as the first-ever Malaysian team in MotoGP™.

In 2021, Franco is joined by Valentino Rossi who will add an extra dimension of championship-winning knowledge and potential to the squad. Featuring an updated look with the latest PETRONAS branding, the team’s Yamaha YZR-M1 will be in Factory-spec for Valentino and A-spec Plus for Franco. 2021 also marks the third year of PETRONAS as the team’s title partner. The season unveil also included focus on PETRONAS Sprinta Racing with words from Moto2™ riders Xavi Vierge and Jake Dixon as well as John McPhee and Darryn Binder for Moto3™.

Razlan Razali, Team Principal: “We are proud to represent Malaysia and PETRONAS on the world stage in MotoGP for a third season as PETRONAS Yamaha Sepang Racing Team. We are looking forward to the season ahead, eager to give Franco and Valentino the best opportunity. For Franco, it’s a fabulous opportunity to achieve even better things than his stellar season in 2020 and, for Valentino, we’re hoping a new team will give him the best opportunities to harness his talent and expertise.

“The team has enjoyed an incredible trajectory since entering the sport and we are thankful to PETRONAS and Yamaha for enabling this through their strong support and shared philosophy and aspirations. 2020 was an incredible year for us, but we are mindful that there are always areas where we can improve. We expect another tough fight on track over the season ahead and we will be pushing at every step to support Franco and Valentino and ensure they have all the tools at their disposal.

“As a team, PETRONAS Sepang Racing Team also incorporates PETRONAS Sprinta Racing in Moto2 and Moto3 as we are proud to have supremely strong line-ups of riders and crew in these categories. For Xavi and Jake in Moto2 and John and Darryn in Moto3 we expect very exciting seasons ahead.” 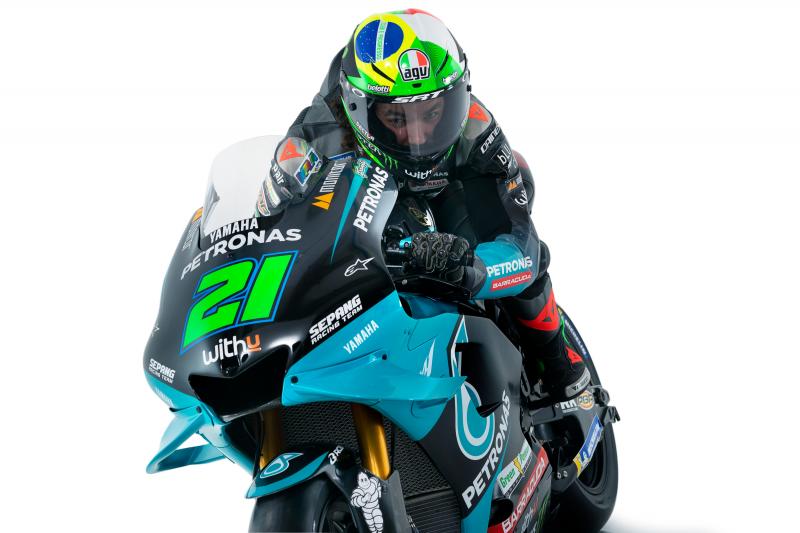 Franco Morbidelli: “This will be my third year with the team and there are many things I like about PETRONAS Yamaha SRT. The 2021 YZR-M1 livery is similar to the last two years, but still changed; It’s the same but different so I like it. What is different from last years is my teammate; I expect and hope it will be a great season for Vale [Valentino Rossi] and me. We have had a strong relationship for many years and we will learn a lot from each other. My personal target for 2021 is to get better; improve myself as a person, rider and athlete. I know it’s hard and difficult because last year we were quite fast and we made great races and achieved great results. Nevertheless, we will have to try to improve compared with 2020, so that’s my aim, try to be better year after year.”

Valentino Rossi: “I’m very proud to be part of PETRONAS Yamaha Sepang Racing Team. It’s a new challenge for me. This is a very young team, but in the last two years they have already been really competitive. I’m happy to see my new bike for this year and I really like the colours of the livery, leathers, helmet, etc. It looks awesome. My targets for 2021 is to be competitive, fight to win races, fight to achieve podiums and also fight for a good position in the World Championship standings at the end of the season. We are all very focused on our targets to make the best we can. I think that with Franco we are a very interesting couple of riders as we know each other really well. All the whole team has a lot of motivation and I will give my maximum to achieve together the best possible result at the end of the calendar. We are ready to start.” 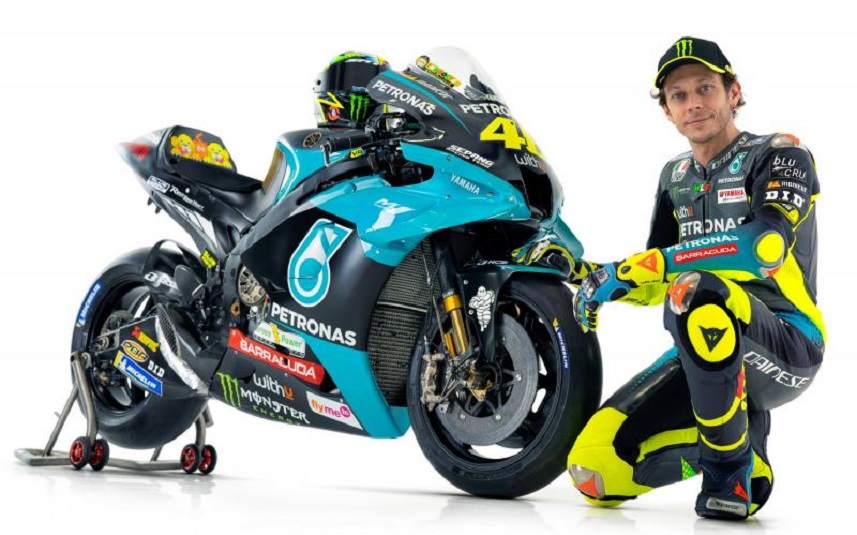 Xavi Vierge: “Being part of PETRONAS Sprinta Racing is just amazing.  Myself and the team understand each other perfectly after one year working together. My target is to fight for the top positions from the beginning, and to keep fighting for the championship until the end. I will try not to repeat the same mistakes as last year and avoid injuries by riding more stable and calmer – this is our target.”

Jake Dixon: “It’s great to be involved with PETRONAS Sprinta Racing because obviously they are present in Moto3, Moto2 and MotoGP, and they’re the only team that’s present in all three classes. Also, it means so much for me to be involved with a massive global name such as PETRONAS. This season I want to be more consistent from early on, which is the biggest factor for me. If I can hit my form early, I’ll automatically be a lot better. I’ll take in the first rounds to see where I’m at, and then slowly build back into it and definitely score race wins and podiums as they were on the cards towards the end of 2020.”

John McPhee: “To be part of PETRONAS Sprinta Racing for a third consecutive year is just fantastic, and it really is like a dream come true for me. They’re such a professional group of people on and off the track. They’ve helped me achieve some great results with two wins and seven podiums. “I’m so excited to see the team after what felt like such a long winter break. I think after strong performances last year in many races, I know I can go better. We’ve analysed lots of data from 2020, and I’m just really excited to see what’s possible, and I’m really looking forward to a great year.

Darryn Binder: “It means a lot to me to be a part of PETRONAS Sprinta Racing. They’ve got a team in every category, and they’ve got such a great pathway to MotoGP. Also, I’ve always looked up to Rossi as an idol, and it’s pretty cool for us to be under the same roof. I’m really stoked to be with him! I’m looking to have a really strong season in Moto3 in 2021. I ended last year off on a good note and I’m looking to pick up where I left off by keeping the ball rolling and doing my best. I want to try and be on the podium as much as I can, and when I can’t be on the podium, I still want to be in the top five.”