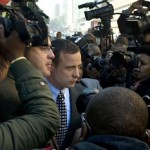 The sprinter’s lawyer Barry Roux argued in a Pretoria court that an application by several media outlets seeking to broadcast the proceedings live would infringe on Pistorius; rights.

“Why can’t this be like any other trial? Why is he different? Is it because he ran fast on the track?” advocate Barry Roux asked the court.

“Does it mean if you are a well-known person there has to be an infringement on your rights? I’m talking here about his rights. Should we allow a potential infringement of his rights because of his profile?”

Pistorius goes on trial on Mar 3 charged with premeditated murder for gunning down his girlfriend Reeva Steenkamp on Valentine’s Day last year in what he claimed was an accident.

The case is one of South Africa’s most high profile murders and sparked an international media scrum.

Pistorius, 27, whose legs were amputated below the knee when he was a young boy, is known worldwide as the ‘Blade Runner’ for competing on two fibre-optic blades and running against able-bodied athletes in the London 2012 Olympic Games.