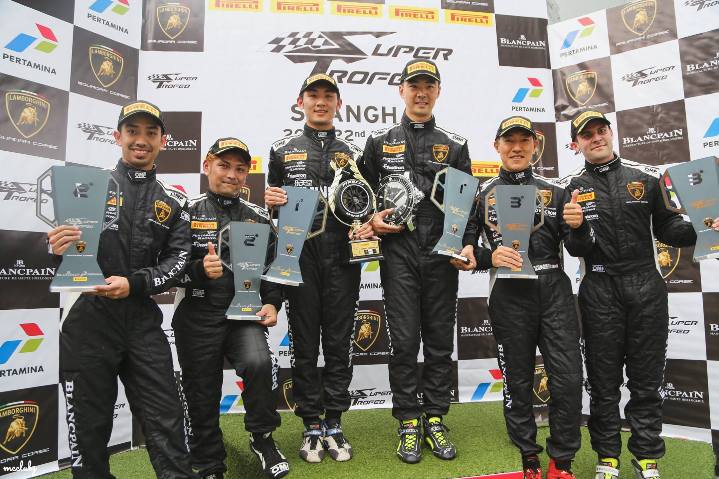 Jono Lester sits third in the Lamborghini Super Trofeo Asia standings after the opening round at Shanghai International Circuit over the weekend; the Kiwi GT driver scoring pole position, fourth and third placings alongside Yasuyuki Uchida in the #23 Air-J Lamborghini Huracan.

With no previous experience at the Shanghai F1 circuit – or in the Lamborghini Huracan LP620-2 platform used in this one-make series – Lester quickly acclimatized with Japanese team Direction Racing to score an emphatic wet pole position on Saturday in treacherous conditions.

A dry race day netted fourth place in the opening race, while in the second a come-from-behind performance from Lester secured a late podium result after first corner, first lap contact between Uchida and Italian driver Max Wiser, resulting in a spin which dropped the #23 to rear of field.

A niggling gearbox problem throughout the race held Lester & Uchida back from a higher result, nevertheless the podium finish locked away precious points for the pairing in their 2016 title tilt.

Shanghai is the first of six rounds in the 2016 Lamborghini Super Trofeo Asia Series with further rounds in Japan, Thailand and Malaysia before December’s World Final in Valencia, Spain.

The next round of the series is at Suzuka in Japan on June 09-12.

“We had every possible scenario thrown at us this weekend, from rain to car problems to some contact and dramas in the races, but there’s a resilience about this team that I’m already really enjoying and it’s just fantastic to not only be racing again, but to be back in Asia with a Japanese team, a fantastic co-driver in Uchida and this monstrous Lamborghini machine to do it all in! Suzuka is next up, and I’ve had success there before in Super Taikyu so I think it’s a real shot for Uchida and I to challenge for victory.”