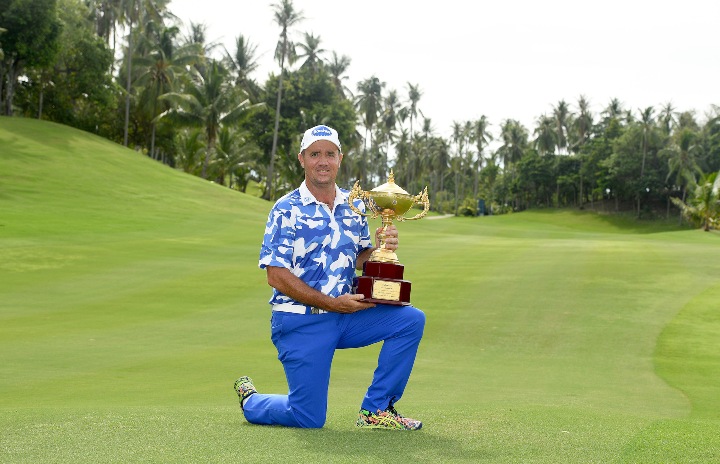 The prestigious Queen’s Cup will return for its ninth edition on the Asian Tour with a record US$500,000 prize fund at the Santiburi Samui Country Club from June 15 to 18, 2017.

Supported once again by Bangkok Airways and Sports Authority of Thailand (SAT), the region’s finest golfers will take aim at a bigger prize pot next month following the sponsors’ decision to increase it by US$200,000.

Since making its debut on the Asian Tour in 2009, the Queen’s Cup has celebrated worthy champions including Thai heroes Prayad Marksaeng and Thaworn Wiratchant, Japan’s Tetsuji Hiratsuka and last year’s winner Scott Hend of Australia, who went on to claim the Asian Tour’s Order of Merit crown.

Big-hitting Hend triumphed with a four-day aggregate of 15-under-par 269 where he held off Thailand’s Gunn Charoenkul for a one-shot victory.

Bangkok Airways Senior Director, Marketing and Communications, Kridhakorn Sirabhabhoj said: “It is a privilege and honour for Bangkok Airways to extend our long association with the Queen’s Cup, a tournament staged in tribute to our beloved Queen Sirikit, the queen consort of HM King Bhumibol Adulyadej.

“Over the years, the Queen’s Cup has produced many stellar champions and provided the inspiration for our very own Thai golfers to achieve their dreams. We are delighted to be given the opportunity to play a leading role in the staging of this highly regarded tournament.

“The Queen’s Cup also provides us with a wonderful platform to promote Koh Samui and our beloved nation as a world-class holiday and golf tourism destination. The media and television exposure that the tournament enjoys have been highly effective in promoting these important elements for Bangkok Airways.”

SAT Governor, Sakon Wannapong, said: “On behalf of SAT, we are excited to support the Queen’s Cup which plays an important role in developing and promoting golf in Thailand and around the region.

“We have been delighted to see Thai golfers such as Thaworn Wiratchant, Prayad Marksaeng and Chinnarat Phadungsil winning the Queen’s Cup since the event’s inauguration which have since inspired other Thai youngsters to excel in the game.

“I am pleased the SAT will continue to work very closely with the Asian Tour as a win achieved by a Thai golfer would mean a massive career leap as the winner’s exemption would subsequently open the door to a global stage due to the Asian Tour’s successful co-sanction programme with other major international tours.”

Josh Burack, CEO, Asian Tour, believes the Queen’s Cup will deliver yet another thrilling week of golf to fans, especially with a bigger prize fund for players to shoot for.

“I would like to thank Bangkok Airways and SAT for their continued support of the Queen’s Cup and it is fantastic to see the prize fund being raised to a record US$500,000 this year. Celebrating the tournament’s ninth edition is a wonderful testament of the strong association that the Asian Tour has with our partners in Thailand and I am confident this prestigious tournament will be another huge success.

“Returning to Koh Samui and Santiburi Samui Country Club will be a treat for our players as it is such as a fantastic destination and golf course. Our top players always look forward to competing in the Queen’s Cup and the stellar list of past champions is evidence of the popularity of the tournament.”