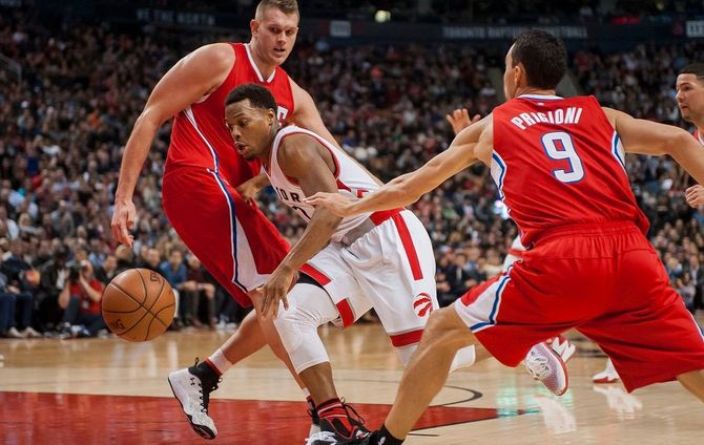 Kyle Lowry scored 21 points as the Toronto Raptors thumped the Los Angeles Clippers 112-94 on Sunday to stretch their winning streak to eight games and close in on NBA Eastern Conference leaders Cleveland.

The Raptors’ latest win, on their home floor in Toronto, was their 29th in 44 games this season, one less than than the Cavaliers, who top the East at 30-12.

The Raptors have built the second-longest winning streak in club history, behind a nine-game run in 2002.

The Raptors’ four reserves, Cory Joseph, Terrence Ross, Patrick Patterson and Bismack Biyombo, out-scored the Clippers’ bench 51-29 and helped turn the game around after Los Angeles had leapt to an early lead.

The Raptors led 62-49 at halftime and were up by 16 early in the third quarter.

The Clippers, paced by Chris Paul’s 23 points, twice trimmed the deficit to four in the third period, but could get no closer.

The struggling Brooklyn Nets surprised the Oklahoma City Thunder 116-106 thanks largely to a season-high 31 points from center Brook Lopez.

Lopez bounced back after being held to eight points in an ugly loss to the Jutah Jazz on Friday, scoring in double figures for the 43rd time in 45 games.

Lopez connected on 11 of 19 shots, notching his 18th double-double of the season as Brooklyn snapped a five-game losing streak.

The win, in a game postponed several hours because of the snowstorm that pummelled the eastern United States this weekend, was the Nets’ second home win in their last 15 games at the Barclays Center.

Kevin Durant paced the Thunder with 32 points, his 10th game of 30 or more points.

James Harden notched the eighth triple-double of his NBA career to lead the Houston Rockets to a 115-104 victory over the Dallas Mavericks — with a little help from recent Rockets acquisition Josh Smith.

Harden scored 23 points, pulled down 15 rebounds and handed out 10 assists.

Smith, who returned to Houston on Friday after being traded to the Clippers after last season, added 16 points and much-needed energy off the bench.

“I feel comfortable,” Smith said. “It might have been a little different story if this had been my first time getting to know these guys, but being able to get an opportunity to play with the same team around the same group of guys is awesome.”

Dallas entered the fourth period shooting 53.4 percent. They made 15 of 30 three-point attempts and led 70-59 midway through the third quarter but couldn’t hold on.

Mavs forward Chandler Parsons poured in a season-high 31 points against his former team, but got little support from his teammates.

Forward Dirk Nowitzki added 19 points but was scoreless over four minutes in the fourth quarter.