Home International Records fall as Games start with a bang 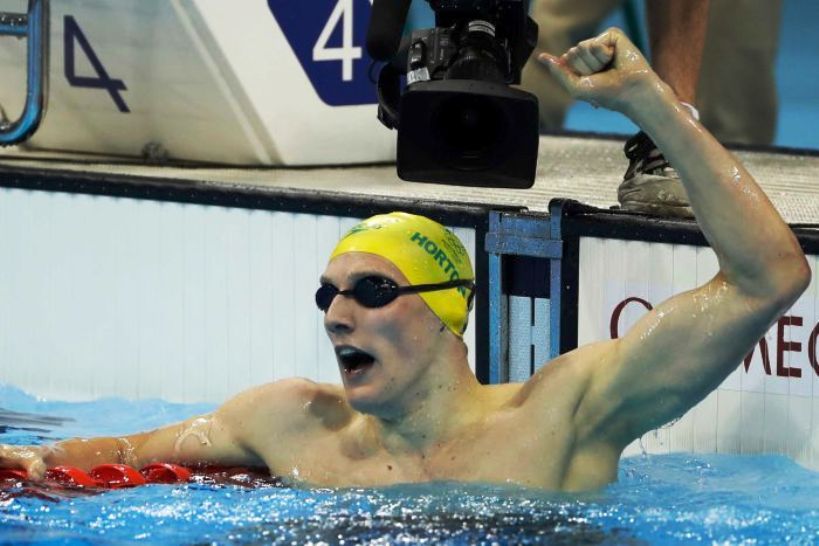 Record-breaking Australia — inspired by Mack Horton and Cate Campbell — put their stamp on the Rio Olympics and moved top of the medals table after an intense first day of action.

Bomb and bullet scares and a horrific double leg break were among the shocks on Saturday, while fans fumed over long queues for venues at Rio’s Olympic Park.

But a trio of swimming world records and a first ever Olympic gold for Vietnam kept the focus on the sporting action as 12 titles were handed out.

There was joy for teenage American shooter Ginny Thrasher, who upset China’s champions to snare the first gold of the Games in the women’s 10m air pistol.

Belgium’s Greg Van Avermaet won a crash-filled men’s cycling road race, and rugby returned to the Games after a gap of 92 years.

Britain’s Adam Peaty was the early star in the swimming pool. He set an eye-popping new world record of 57.55sec in the men’s 100m breaststroke heats — his first ever Olympic swim.

“Definitely my favorite race ever, in an Olympic final with my sister and two girls I have known since I was 12, 13 years old and a gold and a world record,” said Campbell, who swam with Emma McKeon, Brittany Elmslie and her sister Bronte.

“You can’t ask for more,” said Bronte Campbell. “Every kid dreams of it, it’s what we always hoped for.”

The results pushed Australia to the top of the early medals table and confirmed their return to prominence in swimming, after their poor outing at London 2012.

The Rio Games started with an unwanted bang when a military bomb squad detonated a suspicious package near the finish of the men’s cycle race at Copacabana beach, causing jitters among onlookers.

At the equestrian venue at Deodoro, which is on a military base, a stray bullet ripped through the media centre’s canvas roof and landed on the floor.

“All authorities assured that the bullet was a stray bullet that has nothing to do with the Games or the Olympic family or the press. The area was not a target,” said Games spokesman Mario Andrada.

Later Hoang Xuan Vinh wrote his name in the history books when he won the men’s 10m air pistol, claiming the first ever gold medal for communist Vietnam.

Scandal-hit Russia, under fire over a massive doping scandal, got off the mark when Beslan Mudranov won the men’s 60kg judo.

Van Avermaet avoided a crash on the final descent and overhauled leader Rafal Majka with a lung-busting sprint to win the 237.5km (147.5 miles) cycle race.

“It was the hardest day I’ve ever had in my life on a bike,” said Ireland’s Dan Martin, who finished 13th, one place behind Tour de France winner Chris Froome.

Serbian rowers Milos Vasic and Nenad Bedik capsized in choppy waters at the Rodrigo de Freitas lagoon, but won a reprieve when they were allowed to move into the next round.

French gymnast Samir Ait Said suffered Olympic agony. His lower left leg snapped and skewed to a gruesome angle when he landed awkwardly from a vault.

Yusra Mardini, the Syrian refugee who was swimming for her life to a Greek island less than a year ago, won her 100m butterfly heat but failed to reach the semi-finals.

“Everything was amazing. It was the only thing I ever wanted was to compete in the Olympics,” said the 18-year-old, who is representing the Games’ first ever refugee team. – Agence France-Presse